The Farmers And Their Demands

The ongoing peasant struggle in 18 states of the country, which started from Punjab, has brought some very important issues before society and the government. At first glance, the struggle seems to be limited to the repeal of three newly enacted laws on agriculture by the Central Government, but in reality, it is a struggle to save the country's federal structure. Adoption of a people-friendly and nature-friendly economic development model and a path of struggle instead of escapism will solve problems and improve social relations.

Out of these 31 farmers' organizations, the leadership of only one organization has been bent on sacrificing the interests of the farmers out of self-interest, but it has lost face as the members of that organization have largely opposed this leadership.

There was a clear message from the Central Government to set up private markets for marketing of agricultural commodities and to abolish the APMC markets and to run away from procuring at minimum support prices (MSPs) for agricultural commodities through contract farming. It was soon understood that the propaganda by the government to double the income of the farmers through these laws and the words used in the language of these laws are misleading. The third law on agriculture was meant to protect the interests of farmers and consumers.

There is no mention of how this law will protect the interests of the farmers, but as far as the Essential Commodities Act, 1955 is amended, the limit on storage of farm commodities for companies / traders has already been abolished by it. The rise in prices of onions and potatoes has also begun to erode the two-times dry bread for the average consumer.

From 1970 onwards these recommendations were made against the farmers which was opposed and criticized by the farmers' organizations and some political parties. To avoid this opposition and criticism, the Central Government tried to give the impression that the Commission was renamed as 'Commission for Agricultural Costs and Prices' on February 23, 1987, as if it were relying on agricultural production costs in making its recommendations. It was a completely confusing phenomenon.

The Central Government currently sets MSPs for 23 agricultural commodities, but generally procures only wheat and paddy from a few states at those prices. This time the market prices of maize and cotton are bringing to light the reality of the MSP fixed by the Central Government.

The answer to this question is no, as 68 per cent of the country's farmers own less than 2.5 acres and 86 per cent less than 5 acres. For example, if all the farmers are given 50 per cent profit on the cost of production of their commodities and the average annual income of these farmers would be Rs 1 lakh it will be less than Rs 28 per person per day. Will farmers be able to support themselves in this income?

The government must maintain a minimum level of income so that farmers can meet their basic needs of food, clothing, housing, education, healthcare, clean environment and social security in a respectful manner. In order to protect the soil health and environment in the country from degradation, the Central Government has to identify the various agro-climatic zones and ensure proper cultivation in these zones and procurement of their commodities at remunerative prices. In this regard, special care needs to be taken of the two rungs at the bottom of the agricultural economy ladder, farm labourers and rural artisans, as they are more prone to wear and tear in the process of agricultural production and are also being kicked by the farmers.

Both these sections have no means of production other than selling their labour and the increasing use of machinery and herbicides since the adoption of New Agricultural Technology has greatly reduced their employment opportunities.

With the enactment of three laws related to agriculture by the Central Government, the already weakened federal structure of the country has been severely curtailed. According to the Indian Constitution, agriculture and marketing of agricultural commodities falls under the jurisdiction of the states. While enacting these new laws, the main stakeholders - the state governments, farmers, farm labourers and rural small artisans and other unions dependent on the agricultural sector have been completely ignored.

The corporate economic growth model created by the 'new economic policies' adopted since 1991 is creating a number of insurmountable problems for the working class. Economic inequalities are widening between the country's 1 per cent ultra-rich and the remaining 99 per cent, and the vast majority of the wealth and capital generated in the country is being usurped by the 1 per cent ultra-rich which is neither in interest of working class people nor the country. Due to declining employment opportunities in the country, a large number of young people are going abroad, which has led to Brain Drain, Capital Drain and loss of Demographic Dividend.

The peasant struggle has succeeded in bringing to light the fact that the share of 50 per cent of the population, who depend on agriculture for their livelihood, should be increased from 16 per cent to at least that level which would enable the farmers, farm labourers, rural small artisans and other labourers who depend on agriculture to meet their basic needs easily.

The peasant struggle is moving towards becoming a people's struggle, but for its success it is necessary that the peasant organizations understand the problems of the farm labourers, rural artisans and other workers and contribute without any slogan for their solution. The farmers’ unions should facilitate the required increase in wage rates for farm labourers, rural artisans and other labourers as well as strictly avoid caste discrimination. Instead of denying the legal rights of the Dalits in village Panchayati lands, they should come forward to make them happy.

The Governments should sincerely carry out land reforms in favour of the poor and underprivileged workers of the agricultural sector which will increase productivity, production and income of the workers.

The adoption of the 'New Agricultural Technology' in the country and the success of the 'Green Revolution' and the pro-capitalist/corporate world economic development model adopted in the country since 1991 have resulted in individualism among the people belonging to the agricultural sector. The co-operative movement needs to be accelerated to rectify the deterioration in social relations caused by materialist tendencies and to increase the income of these sections.

The Dalit working class families of Punjab through their struggles have taken 1/3rd Panchayati land legally on contract and cooperative farming on it has shown a good way to all the agricultural labourers by providing them with their grains, vegetables, green and dry fodder. Farmers with small holdings, landless farmers, farm labourers and rural artisans can use all their resources to make their lives happier and more meaningful by learning from the Jews of Israel to help each other and moving towards cooperative agriculture.

Cooperation in meeting the machinery and financial needs can yield remarkable results. By adopting agro-based industrial units in the cooperative sector ownership structure, employment opportunities can be increased as well as the benefit of value-addition can be reaped. Consumers' rights can be protected while increasing their income by selling vegetables, milk and milk products and other agricultural commodities at special locations in cities by setting up cooperatives. This will easily dispel the misconceptions created about agricultural dependent workers.

For the peasant struggle to succeed in the long run, the peasant organizations must also overcome political and intellectual pollution. Since 1947, various political parties have been making "promises" and new promises to win elections and establish their own government. Apart from political parties, groups of farmers, farm labourers and rural artisans have been suffering under the guise of one man. To avoid such political contamination, it is very important to read, write, think together, take your problems to the society and the government through the media.

In addition to political pollution, there is an urgent need to avoid intellectual pollution that eats away at those who come in contact with it like an ambergris vine. These so-called eight-striped intellectuals come to the forefront of the struggle, get information from them about their struggle, give advice on how to turn the struggle upside down and put their full emphasis on suggesting to the rulers the methods of crushing the struggle. Therefore, in order to carry out the struggle in a democratic and peaceful manner, there is an urgent need to beware of the immortal vine of political and intellectual pollution. In this regard, workers in agriculture and other sectors should move away from the politics of religions, castes, tribes, families, territories, etc. and also focus on political initiatives with collective leadership. 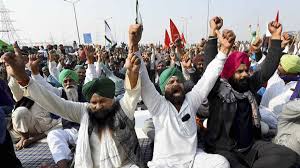