In Mr. Modi's New India coming is as difficult as going, as the chappie told the sexologist. When I came up to the mountains in June this year to take a break from Covid and Kejriwal it was like an obstacle race: what with police barriers, health checks and the need to obtain that priceless E-pass which stated that I would be quarantined if I was coming from a "hot spot." That made me break out in a cold sweat since I knew from experience that it would be some middle pass constable at the barrier in Parwanoo who would determine if I.P.Extension, Delhi 110092 was a hot spot or not. And since said constable would not know the difference between a hot spot and a G-spot, I would in all likelihood spend the better part of my remaining life in a quarantine centre which could, at any time, be declared an NRC detention centre by Mr. Amit Shah.

An understanding D.C. Shimla, however, took care of that problem as also of the long queues at Shoghi, and we finally reached Puranikoti, offering thanks to the Lord in the manner of the pilgrim fathers when the Mayflower hove- to off the coast of an unsuspecting America.

I had thought that returning to Delhi a few months later would be a cake-walk. It wasn't. Our doughty farmers had decided to have a few nights- out and sleep- ins at the Singhu border to personally witness the dawn of the Achhe Din above the Delhi skyline; the Haryana and Delhi police, with their customary generosity, had resolved to give them a cold bath with their water canons for free; and Mr. Modi had made up his mind that this was his Margaret Thatcher cum Ambani moment. The result was that the border was sealed like an Amazon parcel.

We made it to I.P.Extension after surviving many detours, including one through Ghaziabad where they stopped building roads at the turn of the century ( the 18th century , that is.) I was keenly looking forward to spotting many Khalistanis, Pakistanis, Urban Naxals, Maoists, terrorists and fragments of the Tukde Tukde gang on the way, as had been promised by many Union Ministers, but was disappointed: there was only one suspicious looking chap near the vividly named village of Pasinakalan, hiding with a camera behind a bush, but enquiries revealed that he was an anchor from one of the tukde tukde TV channels, grabbing a byte, or perhaps a bite, because the farmers would not share their pizzas with him.

And so I am now in my Delhi flat, waiting for starvation to set in as the farmer blockade intensifies; it's a good time to reflect on the upper and middle-class Delhi-wallahs in their sterile bubbles. Citizens of Delhi are a class apart ( may their tribe NOT increase). They don't give a fig, or an avocado, about the farmers' issues as they get their food from Big Bazaar and JIO retail, their news from Arnab Goswami and Navika Kumar, and their cheap thrills from Netflix and Amazon Prime. They are outraged by farmers having pizzas and foot massages at the Tikri border, not by the 10000 farmer suicides every year or by women and children sleeping in the open at night with temperatures dipping to four degrees celsius.

Wannabe Adanis all, they hate any disruption of their vacuous cycle of life, centered around Gymkhana Club, the Audi parked outside their Greater Kailash house, dinner at Sana-Di-Ge in Chanakyapuri , the evening stroll in Lodhi gardens. They are the frogs who think the water will always be at a comfortable 24 degrees celsius, even as the BJP lights one fire after another under them.

It was freezing cold on the drive to Delhi, but the cockles of my aging heart were warmed by the compassion being shown by our Prime Minister towards the kisans and the jawans in equal measure. The former were repeatedly assured that their were demands would be considered sympathetically, even as he proclaimed at every opportunity that there would be no roll back of the three Acts.

He dedicated himself to our brave soldiers even as they were made to shell out- voluntarily, of course- more than Rs. 200 crores from their salaries towards the PM CARES fund.

He is constantly talking to farmers- the problem, however, is that the kissans he harangues are usually a couple of thousands of miles away from where the protestors are camping at the Delhi borders. Even his vaunted oratory can't carry that far. It is an imprimatur of his empathy that, according to media reports, twenty farmers have so far perished at Delhi's borders- killing with kindness, you would say ?

As for Delhi itself, it almost appears that history is visiting us again. Modern Delhi has been the site of seven cities before the present one: Mehrauli, Siri, Tughlaqabad, Jahanpanah, Firozabad, Dinpanah and Shahjahanabad. Thanks to the arrogance and ineptitude of this government, an eighth city now appears to be coming up at the Singhu- Kundli border. It already has a population of two lakhs or so ( more than any of the earlier seven cities, it may be noted), gyms, massage parlours, laundromats, stalls stocking everything from Parle biscuits to shoes, outlets serving pizzas, biryani, coffee, tea and Indian "thalis", even its own newspaper, appropriately named Trolley Times.

The protestors are also setting down roots here- literally. The have planted vegetables on the road dividers and the berms of the highway, and expect to harvest them next year, no doubt a gentle reminder to the government that as you sow so shall you reap !

And this is only the beginning, for let us not forget that we are dealing here with a community- the Sikhs- who have been the pioneers of the Indian diaspora in the developed world, known for their ingenuity and organisational skills.

Soon it will be time to give the new city a name: since the township has been born of the arrogance and pride of one supreme leader, I would suggest " Hubristan", or, if an Indian sounding one more germane to the issues at hand is preferred, then why not "MSP nagar" ?

The times also stir up a wisp of dejavu. Delhi is- or soon will be- under siege by the farmers, exactly 163 years after it was last besieged by the soldiers of the East India Company in 1857. Then, as now, the siege was led by the sturdy Sikhs who marched along the same Ambala- Karnal- Panipat- Delhi route that today's farmers are taking. I sincerely hope we Delhi-wallahs have read our history, if nothing else. In 1857 Delhi had to surrender, if you are old enough to recollect. 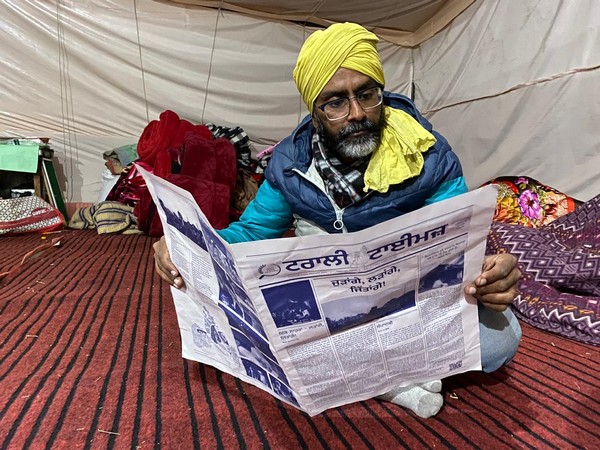