Why Such Brouhaha Over the Gulf Tour by Our Army Chief?

The recent visits by the army chief General MM Naravane to the United Arab Emirates and Saudi Arabia generated some excitement among Indian analysts that a brave new world of ‘military diplomacy’ has dawned. Bombastic coinages such as ‘military diplomacy’ are largely our inheritances from the Americans but when they are bandied about, conceptual clarity is lacking.

- Gathering and analysing of information on the armed forces and the security situation in the receiving state;

- Promotion of cooperation, communication and mutual relations between the armed forces of the sending and the receiving state;

- Organization of working visits of representatives of the defence authorities;

- Support of business contracts in arms and military equipment; and,

- Representation at official ceremonies and other events in the receiving state.

India is an avid practitioner of ‘military diplomacy.’ It has defence attaches posted or accredited to something like 85 countries. (According to reports, the posting of another 10 defence attaches to ten more countries, are currently under processing.) Not many countries — except big powers — can match this impressive tally.

In addition to the above, India also designates representatives of PSUs in the defence sector in embassies abroad. (In Washington, a senior diplomat exclusively looks after ‘defence technology’.) The government generously allocates funds for promotional activities by defence attaches. Clearly, India has no need to reinvent the wheel. If there are shortfalls in returns — eg., our meagre defence exports — the reasons must be analysed.

Therefore, why such brouhaha over the Gulf tour by our army chief? No doubt, India has specific security interests in counterterrorism. The National Security Advisor Ajit Doval has done a masterly job in crafting a productive relationship with both the UAE and Saudi Arabia. In fact, cooperation in intelligence-sharing, real time coordination in curbing activities by terrorist groups, extradition of criminals, etc. are top priorities. Without doubt, Indian Navy ought to be the flag carrier when it comes to fighting piracy in that part of the Arabian Sea.

However, India should not aspire to be the provider of security for the Gulf states. Both the UAE and Saudi Arabia — as indeed Bahrain, Qatar and Oman — depend on western powers to guarantee their security, which is primarily about the preservation of their authoritarian regimes. It is a ‘win-win’ arrangement and so long as the petrodollar nexus is in place, there is no question of retrenchment by the US or UK.

Historically, between 1918 and 1939, British forces were already fighting in Iraq, Sudan, Palestine and Aden — and in the years after World War 2, in Eritrea, Palestine, Egypt and Oman. The so-called Dhofar war in Oman was particularly brutal in the nature of a campaign to put down a popular rebellion against the cruelty and neglect of a despot who was propped up and financed by Britain. The British-led forces poisoned wells, torched villages, destroyed crops and shot livestock.

During the interrogation of rebels, the Brits developed their torture techniques. Entire areas populated by civilians were turned into free-fire zones. Of course, Britain fought this war in total secrecy and refuses to declassify archival materials, lest the war crimes of the SAS got exposed.

That was an era in which the developing world and the United Nations had rejected colonialism, and Arab nationalism had been growing in strength for decades. Strategically, the Dhofar war was one of the most important conflicts of the 20th century, as the victors could expect to control the Strait of Hormuz and the flow of oil. Thousands died, the British won and the west’s lights stayed on.

The West hasn’t lost its appetite for interventionist wars in the Middle East — as evident from the invasion of Afghanistan (2001), Iraq (2003) and Libya (2011), and the ongoing wars in Syria and Yemen. Surely, this sort of ‘military diplomacy’ is not India’s cup of tea.

Take the UAE. Ten years ago, the crown prince of Abu Dhabi hired the notorious private American security firm of ex-Seals, Blackwater Worldwide, to set up an army of foreign troops (drawn from Colombia, South Africa, amongst others) in a $529 million contract to thwart internal revolt, conduct special operations and defend oil pipelines and skyscrapers from attack.

The decision was taken against the backdrop of a wave of popular unrest spread across the Arab world, including to the UAE’s Gulf neighbours Bahrain, Oman and Saudi Arabia. In addition to the Blackwater, the UAE also subsequently contracted other American firms to supply mercenaries or provide operational support.

Simply put, India has no role to play as provider of security in the Gulf region. It may seem that the strained Saudi-Pakistan relations open new opportunities, but the kingdom will only want Muslim countries to provide Praetorian guards. Ideally, India should support the proposal mooted by Russia for the creation of a regional security architecture for the Gulf region.

But we have instead opted for a subaltern role in the western strategies in that region. This significantly shuts India out from being at the high table as developments can be expected in a near future in a region that constitutes our ‘extended neighbourhood’, given the strong likelihood that the Biden presidency may be seriously attempting a de-escalation of the conflict situations and ‘hot spots’ as well as ease the longstanding regional rivalries that would be useful and necessary, through regional discussions shifting the accent from containment to cooperation with a view to establish a ‘normal’ predictable relationship with Iran.

Suffice to say, India is well-advised to focus on defence exports as the flagship of its military diplomacy in the Gulf. But then, we should have world-class products to sell; the sheikhs settle for nothing less. Second, the Gulf is a competitive market and the US intends to retain its dominant position. The Gulf states leverage their excessive purchase of weapons from the US and European countries to create interdependency.

Third, it is inadvisable to strategise a region which is in profound transition. The Saudi crown prince (who is also the defence minister) or the deputy defence minister (who is his brother) did not receive General Naravane, although this was the first-ever visit by an Indian Army chief to Saudi Arabia.

The Gulf region is grappling with grave geopolitical uncertainties. Apart from the rift among the GCC states, the Iran nuclear issue is nearing an inflection point; the US president-elect Joe Biden has promised a big shift in policies toward Saudi Arabia; the post-pandemic situation is fraught with economic difficulties; and a major realignment is under way among the regional states following the Abraham Accords.

Fundamentally, India should have clarity as to the purpose of force projection abroad. The ‘militarisation’ of Indian foreign policy that began a decade and a half ago under the UPA rule, thanks to the constant prodding of the Americans, is becoming a self-propelling enterprise. But the nature of war has changed.

With all the bases and ‘lily pads’ in the Middle East, the US is losing one war after another — Afghanistan, Iraq, Syria, Yemen. The US has failed to force its military will on Iran. All the American bases in the world could not prevent the hacking of the heart of the US government that has been going on since March — whose presence could be uncovered only last week — including the highest tiers of both the military and the civilian side of the government. 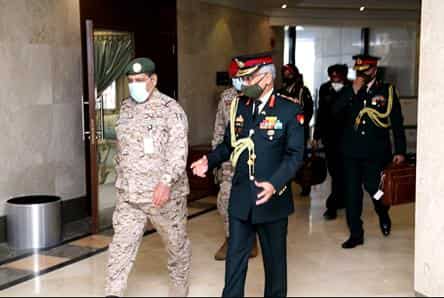