For Whom the Bells Must Toll!

Noble warriors have a timeless and sacred code – ‘I will always place the mission first. I will never accept defeat. I will never quit. I will never leave a fallen comrade’. It is this underlying spirit of professional soldiering that begets subsequent codes e.g. Chetwodian or the reverberating throes of the Indian Army’s Regimental mottos e.g. Sarvatra Vijay, Deg Teg Fateh, Sarvatra Izzat-o-Iqbal etc.

A disproportionately large part of the men and women who wear the ‘Uniform’ and willingly pay ‘the ultimate price’ by going beyond the call of duty, come from the rural hinterlands and dustbowl districts, on the outliers of ‘21st Century India’.

On Christmas night, as the nation dug into its reserves of optimism to indulge in some cheer, Havaldar Anil Tomar, from 44 RR (parent battalion, 23 Rajput) had laid down his life in the finest traditions of his Paltan, Regiment, Indian Army and as a dignified practitioner in the ‘Profession of Arms’. Somewhere in the freeze of December winter in the Shopian area of Kashmir Valley, troops of what is arguably the most decorated unit operating in the restive area i.e. 44 RR (affiliated to the fiery, Rajput Regiment) – another name was added to the Rajput Regiment’s overflowing saga of unmatched gallantry.

It was in this very Shopian area and in the same illustrious battalion i.e. 44 RR, that another fearless warrior, Major Mukund Varadarajan (22 Rajput) had displayed raw courage in neutralizing three top ranked terrorists, but only so, by paying for it with his own life – the grateful nation had bestowed the highest peacetime gallantry award, Ashok Chakra, in 2015.

Today, the quaint and nondescript Sisoli village in Meerut district, mourns the loss of a father, husband, son and one of its very own, as Havaldar Anil Tomar, leaves behind a 14 year old daughter, 10 year old son, along with his wife, parents and family members (including a brother, who too guards our frontiers as a valiant Soldier).

The real possibility of getting ‘Killed in Action’ (KIA) is an occupational hazard, that such combatants like Havaldar Anil Tomar willingly embrace to defend their land and uphold the regimental izzat – and those amongst these warriors who assume Veergati (brave death), have a special reverence that befits the solemnity, enormity and dignity of their sacrifice.

The Indian Armed Forces thrives on its heroes who give their lives for things deemed bigger than themselves – each act of glory, gallantry and sacrifice is an inspiration for generations to come, for the institution’s rank and file. Therefore, the likes of Havaldar Anil Tomar will live on for time immemorial in the heart and soul of his beloved, Rajput Regiment.

Unfortunately, the normalcy and safety guaranteed by the sword arm of the nation i.e. Armed Forces, is easily forgotten or taken for granted by those outside of the ‘Uniformed’ fraternity. Those who enjoy that very peace, independence and liberties, do not recognise that the same is undersigned by warriors like Havaldar Anil Tomar.

It was the former President of United States, Barack Obama, who famously said, ‘Our nation owes a debt to its fallen heroes that we can never fully repay, but we can honour their sacrifice’. The simple soldier usually seeks nothing beyond respect, as ‘respect’ is an ingrained attribute that necessitates the giving of respect and expecting the same in return – sadly, the reciprocity falls short, far too often.

The occasional condescending invocations and electoral considerations notwithstanding, the ‘Soldier’ remains an unsung, unrecognised and forgotten entity, till necessity requires the posturing of the same in public domain. All political dispensations since independence, without exception, have willy-nilly contributed to the neglect, disparity and diminishment of the institution and its sensitivities.

The Armed Forces themselves vest incalculable pride, dignity and attachment to the memory, monuments, graves and other commemorative protocols and elements of its fallen comrades. The Armed Forces double down on rituals of respect in finally ‘laying down’ the fallen comrade with utmost respect, be it for cremation or burials.

From gun salutes, buglers, flag ceremonies to 30 seconds of silence, no effort is spared to internalize and memorialise, the fallen soldier. Even the proverbial ‘unknown soldier’, as poignantly personified by the rifle and helmet on top (Amar Jawan Jyoti – flame of the immortal soldier) is freighted with deep emotions, resonances and symbolism. Some services like the US Navy even have a special ‘burial at sea’, replete with solemn protocols to honour its Navy and Marines personnel.

Professional Armed Forces like India’s, who persevere with the time-honoured concepts of ‘Just War’ and ‘Just Conduct’, extend that dignity onto the ‘enemy soldier’, whom they recognise and respect as a soldier of his/her nation, in the line of their professional duty. Therefore, it was a matter of institutional pride when the Srinagar-based Chinar Corp tweeted a photograph of a recently restored grave of a decorated Pakistani soldier, in the Naugham sector, on the Indian side.

The epitaph at the restored grave reads, ‘In memory of Major Mohd Shabir Khan, Sitar-e-Jurrat Shahid 05 May 1972, 1630 H, killed in counter attack by 9 Sikh’ – unknown to many outside the ‘Uniform’, this sentiment only enhances the moral valour of the Indian Armed forces, and does not diminish our steel or ramrod posture. However, such ethos may no longer be reciprocated across the Line-of-Control, but that speaks volumes of their institutional slide and inevitable future.

Sadly, the recent news of the damaged and dilapidated grave of Brig Mohammad Usman MVC (Maha Vir Chakra), albeit, in a civilian area, led to a justifiable uproar. The Indian Army immediately and rightfully expressed that it was, ‘deeply disturbed and anguished’ and offered to take care of the same.

The unique backdrop surrounding the Brig Mohammad Usman case can never be overstated, as the lionheart had not just displayed superhero bravery, but much before that, he had spurned the flawed and bigoted idea of Pakistan (he was offered the possible role of Pakistani Army Chief) and had instead reposed his faith in the lofty ‘Idea of India’.

Brig Usman had gallantly fought to death against the retrograde idea of Pakistan and his haunting last words were, ‘I am dying but let not the territory we were fighting for, fall for the enemy’. Even though Jawahar Lal Nehru, Lord Mountbatten and many other dignitaries had attended the funeral of the pride of India – 72 years on, his grave and memory like so many other Killed-in-Action ‘martyrs’, fell to shocking disrepair and ignominy.

Brig Mohammad Usman, like Havaldar Anil Tomar belongs to the erstwhile United Provinces (Uttar Pradesh) – the former from district Mau, and the latter from, Meerut. The Veterans and Combatants are sure that Brig Usman Mohammad Usman would welcome Havaldar Anil Tomar ‘In Valhalla’ where noble warriors regroup, beyond the petty politics of ‘divide’ that consume the citizenry but are an abhorrence for the apolitical and naturally patriotic guardians of the nation i.e. its soldiers.

The veritable ‘last option’ of the nation is no longer the ‘last’, anymore – increasingly, it is the ‘only’ and ‘first’ option, and it is bravehearts like Havaldar Anil Tomar who pay the price for the nation. Havaldar Anil Tomar’s regimental memorabilia and mementoes are encrypted with a singular and rote sentence from the Mahabharata, ‘Victory or death in battle has been the religion of the Rajput from time immemorial, it is his character that he knows no fear’ – he certainly kept that covenant. Havaldar Anil Tomar will never be forgotten by his paltans i.e. 44 RR and 23 Rajput, the Rajput Regiment collectively, or by the Indian Armed Forces, but the question is – what about the nation at large?

In the moving words of the American poet, Joseph Rodman Drake, ‘And they who for their country die shall fill an honoured grave, for glory lights the soldier’s tomb, and beauty weeps the brave’. Shabash Havaldar Anil Tomar, you kept your word to the nation and fought the just fight – today the nation is free, only because of the likes of you. 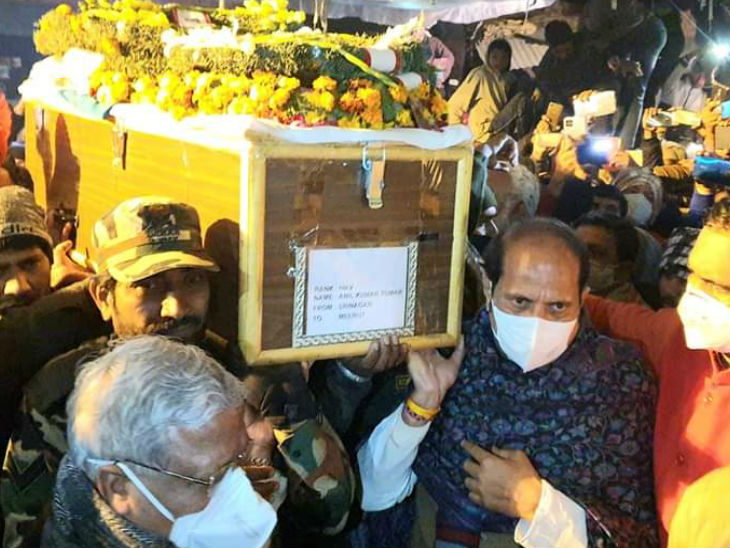