Decode As You Like, But Invest With Democracy in J&K

Acknowledging her electoral defeat, post the ill-advised Emergency, Indira Gandhi stated the most profound truism of democracy, ‘winning or losing of the election is less important than strengthening the country.’

History had just dealt her a cruel reminder of underestimating the organic angst of depriving people of their constitutional freedoms and liberties. No amount of data to support the Emergency period with purported increases in manufacturing, agriculture, exports, forex or decline in communal riots, or even the fact that trains ran on time, could justify the stunting of democracy.

A leading newspaper had written a telling obituary for Emergency, ‘Democracy, beloved husband of Truth, loving father of Liberty, brother of Faith, Hope and Justice, expired on June 26’. Indira Gandhi was to famously reflect and return within 3 years, after recognising the puerility of her logic for proclaiming Emergency, ‘there is an imminent danger to the security of India being threatened by internal disturbances.’

Hereinafter, India was by-and-large wiser for the unwanted experience of Emergency and recognised that the project of strengthening a nation is not done by depriving democracy, but by deepening its roots, however electorally unpalatable it may seem, in the short term.

Through sheer force of her personality, Indira Gandhi, institutionalised some political instincts that bore the sort of assertive, insensitive and at times, amoral politics that have afflicted India, ever since. Immediately after her era, Indian politics undertook a counterintuitive maturity, nuance and ‘sense of accommodation’ in handling contrarian views.

From Rajiv Gandhi’s personal poise and dignity, VP Singh’s sense of morality, Narsimha Rao’s ‘economic liberalisation’, Atal Bihari Vajpayee’s ‘Kashmiriyat, Jamhoriyat, Insaniyat’ to Manmohan Singh’s uncommon decency and grace – India may have meandered in its partisan choices, but each leader reflected its finest civilisational, constitutional and democratic anchorage. Vajpayee’s stirring words in the face of electoral defeat echoed his reverence for democracy, ‘Governments come and governments go. Parties appear and disappear. But this country should remain, and its democracy should remain eternally’.

With such faith in democratic values cutting across party lines, it was hardly surprising that the only (read, only) country in the world that has conclusively ended insurgent movements, is India. Contrary to the oft-quoted muscular examples of Israel, Russia or China in handling internal insurgencies, their internal insurgencies continue, unabated – whereas, India successfully concluded violent insurgencies in Mizoram and Punjab, with democracy, above all.

Both these troubled areas had entailed religious minorities, but the inclusive and large-hearted ‘Idea of India’ had triumphed bigotry, majoritarian and support from ‘across the borders’, by reposing trust in its own people with democracy and dignity.

The winning formula for restoring normalcy in insurgency affected area, beyond ensuring the necessary steel of security imperatives, is instructive for posterity - it entailed a societal outreach via restorative ‘Accords’ (Punjab/Longowal Accord 1985 & Mizo Peace Accord 1986), that accepted local concerns and grievances, without ridicule.

This move had crucially facilitated the ‘voicing’ of regional angst by encouraging all to partake the democratic route to table local concerns, within the embracing contours of the Indian Constitution.

The political leadership had looked beyond the unimpressive arithmetic of just 1 Lok Sabha seat in Mizoram, and 13 in Punjab – it had not forsaken the duty to ensure democratic rights for all, at the possible altar of majoritarian politics which would instinctively would have suggested a more ‘muscular’ approach, entailing curbing of liberties.

People often forget that the man who was sworn in as the Chief Minister of Mizoram after the Mizo Accord, was none other than Laldenga, who had led the secessionist movement of Mizo National Front. Today the sitting Chief Minister is Zoramthanga who was once, the deputy to Laldenga – and Mizoram is amongst the most peaceful and progressive states in the North East. Similarly, Punjab politics if full of people who had expressed extreme displeasure against the handling of the situation from ‘Delhi’.

Even the current Chief Minister of Punjab, had quit the Congress and fought ‘Delhi’, albeit, democratically. Importantly, the ‘Accords’ themselves did not end the strife immediately, as it lingered on for some time, but the honest attempt of winning with democracy was recognised by the locals, and with time, insurgency died a consequential death.

Tragically for India, the Kashmir insurgency has persisted for too long, and like all previous insurgencies, fully supported from across the Line-of-Control.

In over 40 years as a combatant, I took part in anti-insurgency operations in both Mizoram and Punjab. However, like most Infantarians, one tenured most in J&K, including at Kargil and commanded a Brigade in one of the worst affected areas of South Valley, at the height of terror activities in mid-90’s.

During my tenure, I lost several brothers-in-arm (as in Mizoram and Punjab, earlier), the loss of which can never be expressed in words, or ever diminished. Each Indian Army combatant had fought and died selflessly for the nation – leaving a wound and situational perception, for life.

But democracy in Kashmir, has been a stuttering commitment – often compromised for a short period of time for good reasons, but also extended for too long, without commensurate good reasons.

Like the insignificant number of seats that Mizoram and Punjab contribute to the Lok Sabha, Kashmir Valley too only sends 3 seats to the National Assembly – but, affording a priceless canvass for optics of a certain ‘governance style’ that could galvanise the mood in the rest of the country.

Truth is, mismanagement of Kashmir has been historical with all national & regional parties (without exception), having exploited the situation, without considering the long-term impact. The machinations underlying the initial Nehru-Sheikh era, rampant corruption and lack of socio-economic development despite several ‘special packages’ by all subsequent governments/coalitions, to the utter neglect of Jammu and Ladakh region – the failure of State politicos of all hues, has been monumental. However, the persistence of the democratic imperatives (despite multiple challenges and breaks) allowed the moral, constitutional and societal ‘connect’, and the same continuously disproved the dissenters.

The genuine democratic heal that was re-initiated by Vajpayee in earnest and was carried forward equally sincerely by the Manmohan dispensation, had led to the resurgence of peace, ‘opening up’ and decline in terror activities and support, factually and palpably. Despite ideological differences and wounded perceptions about the local parties/politicians, both Vajpayee and Manmohan had coopeted the local political options.

Democracy was slowly but surely winning the day, till suddenly ‘Delhi’ decided to get muscular!

History of successful counterinsurgency teaches us that the acid test of ending a secessionist movement is not in asking the opinion of all those outside the said region, as much as by accounting for the opinion of the people, within that disaffected area.

Today, Kashmiris are arguably the most disengaged with the ‘Idea of India’, then perhaps ever-before, since independence. What we have ‘othered’ successfully in the rest of the country is not just the terrorist, but the entirety of people, local political movement and the essential dignity of holding contrarian views (howsoever ill guided and misplaced, they be). In the earlier successfully concluded insurgencies, the entirety of the local population was spared the simplistic taints and attributions, despite their protestations.

Indeed, the local/regional parties can be (should be) brought to into questioning about its conduct, but the same holds true for the rest of the country, too.

We cannot, should not, demonise the existing local political platforms. Whereas, disagreeing and offering political alternative, is certainly healthy and perhaps, even necessary. One most never forget that the Gupkar Coalition of the local political parties, is operating within the willful ambit of the Indian Constitution, albeit, within their own perceptions and interpretations of its leniencies, and not by that of the constitution of a neighbouring country (only true for terror organisations).

A very prescient part of the Gupkar Declaration is the last line of their stated declaration: ‘safeguard the legitimate interests of the people of the State with regard to the guarantees given to the State by the Constitution of our country’. The operative and invaluable word is, ‘our country’. We cannot disregard that umbilical cord to the nation that links an opportunity to engage, irrespective of differing perspectives and outlook.

Today we must celebrate the recently concluded District Development Council (DDC) elections in J&K, not just as a Centre Minister suggested for giving a ‘resounding a slap to terrorists’ or because a former Chief Minister said that the results tantamount to, ‘rejecting the unconstitutional decision to abrogate Article 370’, as both these statements are basically playing the rote tune, to its cadres.

What is more important to celebrate is that democracy was persisted with, and that, finally offers hope. Importantly, BJP won 3 seats in the Valley, just as Gupkar Alliance won seats in Jammu, Sambha and Ramban. Hearteningly for secularity, three Sikh candidates won from the Valley and in terms of freshness of political ideas, an unprecedented 50 Independents won, out of the total 280 seats!

Depending on whom you ask (and still where you ask), and how they are able to twist the election statistics towards their partisan advantage, the answer will be staggeringly different – but perhaps the most resounding victory is for democracy, and for the hope that it automatically generates for Kashmir, and by that extension, for India as a whole.

Onus is now on ‘Delhi’ to normalise and further the democratic imperatives in the Valley, as fast and as much as possible, as in the rest of the country. This does not imply lowering of guard in terms of the security wherewithal, it only suggests the reposition of faith in democracy to retrieve the restive situation, as it did in Mizoram and Punjab.

This will necessitate political courage and unprecedented magnanimity, grace and a spirit of accommodation without lazily generalising and ascribing pejorative context onto a people at large, or onto their political choices.

Persistence with democracy is the only investment that guarantees positive returns in the long run - it is never linear returns, or always palatable, or even a safe task – but it wasn’t so in Mizoram or Punjab either?

But finally, it was reassuring and democratic ‘Idea of India’ that reversed the situational tide, and not just the so-called ‘muscular politics’, which is essentially politics with a national calculator. 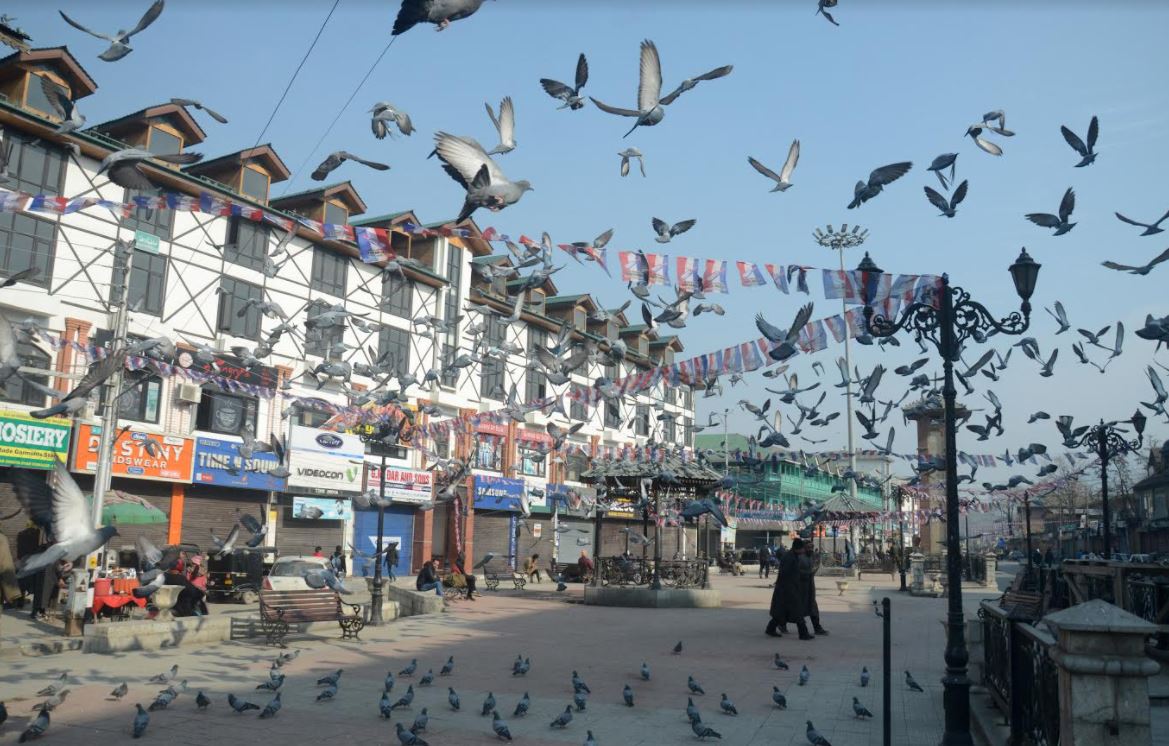