Trump is the Symptom, Not the Disease

Even as the American reel under the shock of fellow Americans seeking to overthrow democracy right in their midst, there is a sense of strange satisfaction in the world that has felt the heat of US authoritarianism in its foreign policy. The endless wars, the toppling of regimes in the name of democracy, the interference, the talking down with muscles being flexed at the slightest pretext, is perhaps best captured in this black humour message being circulated across India at this very moment : Americans recently found out that it's much easier to change Presidents in other countries than they can do in their own country.

Trump is a disaster, and as CNN anchors have said repeatedly, a national disgrace. Commentators are speaking of his mental health, Democrats of impeachment even as those who made Trump possible are now fleeing from the White House ranks. Incitement to violence by an American President has electrocuted the body of the US with all rushing to find internal reasons resting in the mind of Trump and the spine of the Republican party to explain this.

An Indian flag being waved as the rioters ---referred to by the US media as domestic terrorists---climbed atop Capitol Hill and ransacked its interiors as those inside were rushed into bunkers and relative safety. The flag, noticed certainly by the Democrats if not by the American media, has led to a storm of outrage here on the social media with the close Trump-Modi relationship being relieved in messages. No wonder that Prime Minister Narendra Modi also had to jump this sinking ship with a tweet distancing himself from Trump and the rioters.

CNN carried a brief discussion on what the response would have been had the Black Lives Matter movement indulged in this violence, and broken barricades to storm into US democratic bastion Capitol Hill. What indeed? It needs no imagination or for that matter discussion to point out that the use of force by the state would have been ruthless, unlike this instance where help arrived after a while and individual policemen could be seen running within the building with the mobs in chase. Interestingly conspiracy theories that the left wing groups might be responsible for this violence are already being floated, even as sections of the media fight against this spread of fake news.

However, while the discussion goes on within America about the response to this violence and Trump, the numbers of those supporting Trump (can be someone else tomorrow) and the polarisation within shows that something has gone drastically wrong with American democracy. The country seeking to support democracy to the world through wars and intrigue and assassinations, now finds its own democracy challenged not by terrorists from without, but terrorists from within. Why has this tribe grown and increased? The solution lies in the answer to this question and not through the persona of Trump. He is the symptom, not the disease.

Over the years of macho-nationalism pushed forward with great vigour in recent times by the likes of former President George W. Bush, the US projected an image of macho-nationalism finding its strength through increasing militarization. The images of the so-called democratic nation changed from Abraham Lincoln with pen and paper to Bush and others in military camps, cheering on soldiers fighting populace in different parts of the world with West Asia having replaced Vietnam. Unlike Vietnam that saw huge protests within the US and celebrities leading the call to end the war, Iraq and Afghanistan fearsome endorsement with America. The heady potion of war and nationalism was successfully fed to the people, as they grappled with discrimination and joblessness.

Interestingly the two groups that had been left out of the American Dream are at two opposing ends. One the African Americans who have built into a movement because of leaders like Martin Luther King and Malcolm X, and two the white Americans at the lowest rung of the economic ladder many of whom find solace through white supremacist groups. In short, the fishing ground for the white supremacists have been this strata of the economic ladder, with Trump appearing on the scene as one of their own. As his was an appeal direct to the frustrated and angry Whites who he emboldened for support. How frustrated and angry is known perhaps even to America only now, that was indulgently dismissive of clans like the Ku Klux and now has to contend with the fact that the ideology has penetrated into the interiors.

The militarisation fed into this ideology, as did the nationalism that was generated around wars. The jargon of war replaced the mantle of peace with the vocabulary feeding into the machismo that is now on display. The constituency supporting this widened with the increasing gun attacks on schools and institutions being a pointer to the deterioration of societal democratic norms. Some realised it and asked for gun controls, but this was largely rejected by the Americans. The intolerance exhibited by the US in countries abroad, through a militarist foreign policy, found echoes within as the American state took on more and more powers through Homeland Security that remained directed against African Americans, migrants within the country.

Right wing nationalism, in any part of the world, thrives on the creation of the ‘other’ and was used to unite white supremacists in the US by community leaders and organisations. There has been sufficient evidence of it, in dots really that were never fully joined to even predict a picture like we have seen now on Capitol Hill. Trump addressed these groups directly, and through his tenure said enough to convince them that he was a President looking out for their rights. Recognised at last, the white supremacists embraced him as their President so after he gave them the public nod they stormed Capitol Hill maintaining that he was the victim of a massive electoral fraud. Significantly, after the Geroge Floyd murder the groups protesting against racial discrimination had demonstrated outside the White House with Trump being their target. He used this successfully to rally those who are opposed to equality and freedom for all.

The US can return as a democracy with all institutions in place if it brings about a major change in its domestic policy in favour of justice and equality for all. But even more so in its foreign policy where it extends this respect for dignity and life to nations not as fortunate, and spreads peace instead of war. Democracies do not survive with dichotomies with one policy at home and another abroad, as the signals become confused and the population aggressive, Militarization cannot be confined to foreign shares, it enters domestic policy in word and action. Joe Biden and the Democrats have their work cut out of them, but given the past it is unlikely that the new administration will work for harmony between the within and the without. 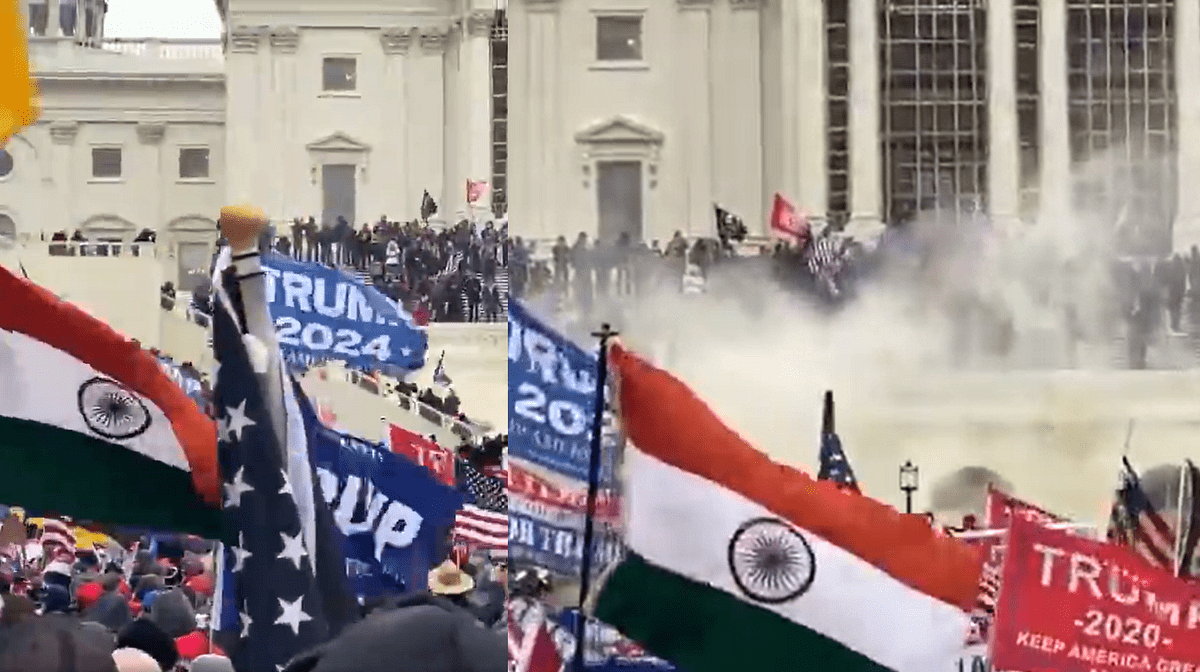 In Photos: Farmers Tractor Parade from Singhu to Red Fort 46 minutes ago

In Photos: The Spirit of the Farmers Republic Day Tractor Rally 7 hours ago

Post Covid, Bodies And The Ruins of a Liberal World Order