A Populist, Narcissist, Street Fighter as the Leader- The Perils

In the words of the Senate Majority leader Chuck Schumer:”the temple of democracy was desecrated. Jan 6 will go down as one of the darkest days of recent American history.”

His sentiments have resonated with millions of American citizens and admirers of American democracy all over the world.

The visuals, beamed in billions of homes, of Trump supporters/ thugs , carrying Trump Paraphernalia, storming the Capitol, marching through the corridors, smashing windows, vandalizing the office of Speaker Nancy Pelosi, creating unprecedented violence and mayhem leading to the evacuation of the Congressmen and Senators from the joint session of the Congress, have shocked the democratic world. It was just so surreal!

For a few hours, the thin line between democracy and dictatorship was obliterated. Scenes of such vandalism, violence and chaos are often seen under totalitarian regimes where the losing leaders call in military and tanks to hang on to power. The US capitol was last breached by the British during the war in 1812!

Former Republican President George Bush found it “so sickening.”Other three living former Presidents: Carter, Clinton and Obama also condemned the assault at Capitol in the strongest terms. For President elect Joe Biden it it was” insurrection”bordering on sedition.

But was this really so unexpected? Didn’t the US Administration, Homeland Security, Washington DC Police, and citizens underestimate Trump’s destructive streak? Did Trump hide his intentions? No!

Even before the Presidential debates, in response to questions from the media, he had emphatically replied that an electoral defeat won’t be acceptable to him because he believed that he couldn’t lose unless the election was rigged.

This unshakable self belief wasn’t reflective of his deep faith in democratic values and democratic institutions. It was, basically, the obsessive self-righteousness of a narcissist President!

Didn’t he refuse to condemn the white supremacists and right wing groups during the first Presidential debate moderated by Chrish Wallace in Sept 2020 and instead asked the Proud Boys, a far Right group, to stand back and stand by? Didn’t New York Representative, Alexandria Ocasio-Cortez call out Trump as a White Supremacist and warned of “Fascism at our door”?

Did he denounce the cop who choked George Floyd, an African American, to death on May 25 2020 in Minneapolis which triggered off the protest Black Lives Matter? Houston Police Chief Art Acevedo’s advice to Trump on CNN’s Christiane Amanpour show was the bluntest: ”let me just say this to the President of the United States on behalf of the Police Chiefs of this country : please if you don’t have something constructive to say, keep your mouth shut.”

There is enough evidence to show that President Trump incited and exhorted his supporters for a week - we are going to fight...we will never give up...we will never concede - hence he must be held responsible for all what followed. Even when he asked his supporters to “go home”, following an open appeal from the President elect Joe Biden to end the” siege” there wasn’t an iota of condemnation of the attackers or expression of remorse or regret for the loss of five lives.

Trump began his presidency with twin populist slogans: “America First” and “Make America great again” which none could object to But his assertions that his predecessors didn’t do anything for the country, they ruined it, had very few takers.

He displayed arrogance, self righteousness and intolerance of contrarian views and claimed to be always right. Any criticism in the media was trashed as fake news. Those who dared to dissent with him in the White House or the Cabinet were either fired or were forced to resign - the long list of over 45 included Secretary of State, Defence Secretary ,National Security Adviser, Attorney General, Chief of Staff and others. He went on overturning his predecessor Barack Obama’s decisions, domestic as well foreign, without offering a better alternative: Health care, immigration, racial justice, TPP, Nuclear deal with Iran, normalization of relations with Cuba, Paris Climate Change agreement to name a few.

He popularized his populist view that the whole world had been taking advantage of the US and previous Presidents did nothing about it, so he was setting it right. His greatest achievement was shaking China’s economy with his tariff war. Conversely, it impacted adversely on the American economy and prevented the recovery of global economy. Giving the strategic salience to Indo-Pacific region to keep it open and free for navigation and over flights, reenergizing QUAD and opposing China’s aggressiveness against her neighbours were seen as positive Trump policies but the ASEAN was not ready for an anti-China front.

He demanded America’s NATO allies contribute more for their own defence which no American could object to . He was transactional in his approach and expected others to remember Milton Friedman’s dictum: there is nothing called a free lunch!

But his methods and manner to achieve these objectives left many uncomfortable. To snap phone conversations with the Mexican President and the Australian PM, and indulge in a public spat with NATO leaders and the Canadian PM was not diplomacy; it was nothing short of bullying.

The bottom line is that Trump is no statesman. Far from it. He is an unscrupulous, businessman turned politician who has tasted political power and doesn’t want to let it go. He exacerbated polarization and divisiveness! Winning by any means, fair or foul, is his guiding motto as his refusal to accept the presidential election results and attempts to scuttle the vote prove. He filed more than 20 complaints alleging widespread electoral fraud without offering any evidence; naturally all of them were rejected.

Having lost all the legal battles he turned to the streets. He clearly lacks all moral and ethical values to lead the country. He is alleged to have avoided paying taxes and bought the silence of women who had accused him of sexual exploitation. Since he became the President, several psychiatrists and mental health experts have expressed concerns about his mental health.

Biden and other leaders, appalled by the spectacle of chaos exclaimed, “that’s not what we are!” Former Defence Secretary, William Cohen admitted candidly, these Ultra Right Supremacists have been a part of our society for long. We must identify, prosecute and send to jail.

President’s word can inspire or incite, Trump chose the latter. Vice President, Mike Pence stood for democracy and Constitutional obligation. For the moment, Freedom has won. But it’s a serious wakeup call! 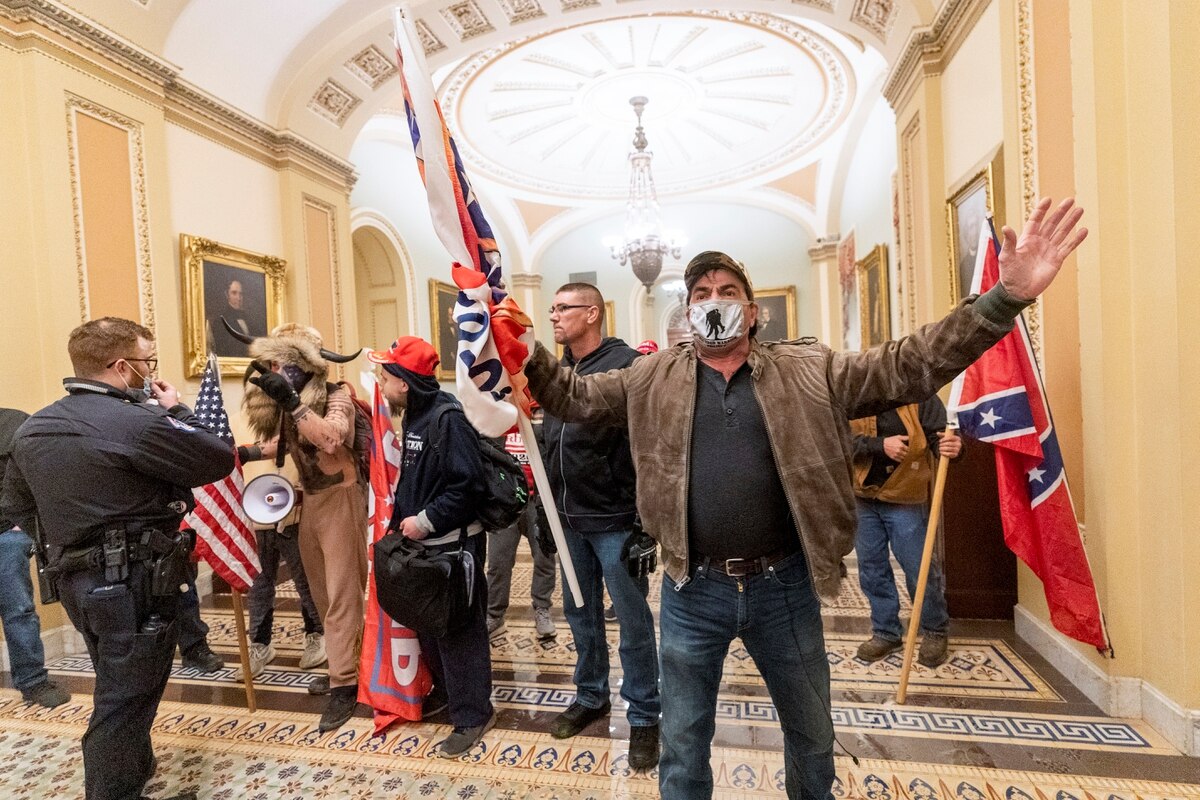