According to media reports, the US President Joe Biden has picked as many as 20 Indian-Americans for senior positions in his government, and the common thread running through them is that none of them had anything to do with the RSS or the BJP even remotely. What a curious yardstick to apply — avoid like plague India’s high-flying cultural organisation which runs the country and the ruling party that runs the government!

This does not come as surprise to anyone who was watching with horror the complete misreading of American politics by India’s foreign-policy establishment, whose incredible naïveté in assuming that Donald Trump was destined to get re-elected as US president is becoming difficult to cover up anymore.

Biden has been very thoughtful in keeping the raucous Sangh Parivar fellows at such a great distance. After 4 years of Trump, he is concentrating on the politics of unity, inclusiveness and tolerance. Biden has a well-earned reputation of fifty years in public life as a statesman who detests bigotry and abhors identity politics, which is indeed his trump card today as he leads his nation out of the area of darkness under “Trumpism”.

Biden must be aware of the intense revulsion felt by several top Democrats (including Bernie Sanders, Nancy Pelosi, Pramila Jaipal, etc.) over the ghoulish spectacle known as “Howdy Modi” that was enacted at Houston in October 2018 in the presence of Prime Minister Narendra Modi at a crucial juncture in American politics when they were locked in an existential struggle with then US president DonaldTrump.

Trump may have only made matters worse by later conferring on Modi, as if in a reciprocal gesture, the Legion of Merit, a medal that is usually reserved for foreign military personnel.

As for the Sangh Parivar fellows who choreographed the Howdy Modi event, they were likely self-seekers currying favour with the Trump administration. But the astonishing thing is that many intelligent Indians fell for that grotesque pantomime played out in Houston. This is what one Indian commentator wrote:

“The religious Right in Texas — indeed, in all American South — and the region’s dominantly right-wing political ideology have no difficulty in identifying with the policies and actions of the Bharatiya Janata Party and the Rashtriya Swayamsevak Sangh. The religious Right in the southern states of the US, although Christian and fundamentalist, has a more favourable view of Modi than secular and liberal Americans, whom India has traditionally courted since the time Jawaharlal Nehru was the Prime Minister.”

The art of flattery used to be straightforward in olden times. You simply said that the rich man was the tallest, bravest and wisest man. The safety of that method was in its artificiality. Everyone knew it was false and it did no harm. But the present-day art of flattery in the Modi era is more subtle and therefore dangerous. Truth gets lost when it is combined with an atmosphere of mystique, and presumably, the flattered person is pleased to find himself associated with many strange ideas.

The analyst wrote that now that Hindutva has become “the national political ideology” in India, Americans were attracted to “Vedanta classes, listening to spiritual discourses and meditating for a few hours each day.” Conflating Hindutva with Indian philosophy, he continued:

“Modi’s visit to Houston could be a turning point if sentiment against his government’s recent actions, especially in Jammu and Kashmir and in the North-East, acquires a steady and greater consolidation among Democrats. As younger Democrats — more so Indian-Americans in that party — move more to the Left as a backlash to Trump’s overall policies and his style of politics, an entire generation of them could be lost to the new India which Modi and his party has fostered since 2014 and will continue to nurture in their next five years in power.”

“If that happens, India will need an insurance for continued and better relations with America. A visit to Houston is Modi’s ‘Plan B’ to insure productive Indo-US relations in future. Modi could handsomely encash that insurance policy if Trump is re-elected President next year.”

Modi probably got enchanted by such hyperbole. But what about the Indian foreign policy establishment, which ought to have known that Trump’s re-election bid was destined to be a toxic subject? By the way, when Reps. Brad Sherman of California and Al Green of Texas reintroduced their article of impeachment of Trump in early 2019, this was how Rashida Harbi Tlaib, American politician and lawyer representing Michigan in the US House of Representatives, publicly reacted to it at a MoveOn reception on Capitol Hill— that the Democrats would “impeach the motherf*****.”

Suffice to say, the messaging here is that the India that Biden genuinely values and holds in esteem is the very antithesis of the India under our present right-wing ruling elite. All this is a reflection of the sad state of affairs within our government. Remember, in an extraordinary gesture at Houston, Trump openly mentioned External Affairs Minister S. Jaishankar by name and praised him as an asset for the India-US partnership! Trump is known to be a 900-pound gorilla, and must have had good reasons to feel obliged to Jaishankar.

On the other hand, Biden has not hidden his warm feelings towards India and his strong conviction would be that the US-Indian relationship is in his country’s interests. The Biden Administration will likely pursue a policy to enhance the strategic ties with India. Thus, the US will continue to eagerly foster military-to-military cooperation. So long as the US’ rivalry with China remains a centrepiece of the US’ Asia-Pacific strategy, it will need India.

However, we should put in perspective the extent of influence that Indian-Americans wield in influencing the US’ policies. Evidently, the Indian-Americans present themselves as a pool of erudition, talent and professionalism. We shouldn’t think of fragmenting them. India’s long term interests lie in allowing the Indian-American community to remain as a progressive force in American politics.

Meanwhile, a singular happening has been the new US vice-president — Kamala Harris. Indians take immense pride in her but make no mistake, she is a completely self-made politician. The RSS or BJP never paid any attention to this extraordinary Black American woman who’s a Christian with Indian ancestry before Biden picked her as his running mate.

Yet, India will always remain a sentimental journey for Kamala Harris. Doesn’t it suggest something about the wonder that was India? Her — and Biden’s — idea of India and Savarkar’s idea of India are poles apart. 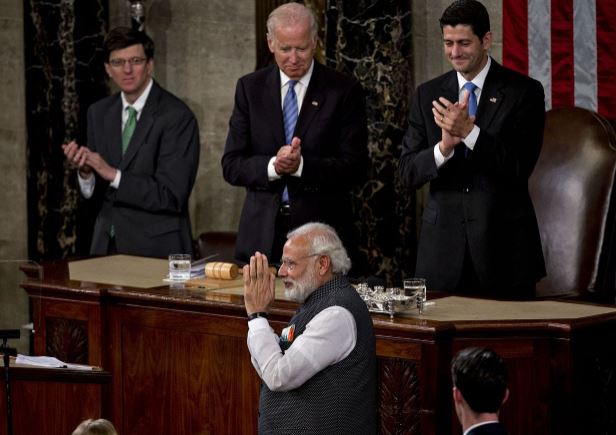