The farmers’ peaceful protest demanding repeal of the farm laws began on November 26 2020, Constitution Day, non-violently overcoming physical and political obstacles, to encamp at the gates of Delhi.

The repeal-the-farm-laws “ball” served to government by the farmers, was tossed into the Supreme Court by government. Without hearing pending petitions questioning the constitutional validity of the farm laws, the Supreme Court, publicly disappointed with government’s handling of the matter, suspended the farm laws and appointed a committee to look into the farmers’ grievances and resolve the farmers-government deadlock. The Supreme Court appears to have assumed a mediating role, encouraging the two parties to amicably settle-out-of-court, as a counsellor might do in a marital dispute marked by mistrust.

The government has held ten rounds of talks with the farmers’ unions, most recently on January 22, ending with agriculture minister Narendra Tomar saying that government is ready to hold the farm laws in abeyance for 1-1.5 years, and has nothing more to offer, saying: “The ball is in your court now”. Farmers question the authority of the Executive to hold in abeyance, a law made by the nation’s highest Legislature.

Civil society groups and individuals organized and conducted a Kisan Sansad (Farmers Parliament) on January 23 and 24 at Guru Tegh Bahadur Memorial near Singhu, to discuss the issues surrounding the farm laws, but clearly supportive of the farmers’ stance.

The farmers have scheduled a peaceful Kisan Parade to celebrate Republic Day, with 2,00,000 tractors “marching” in Delhi, without disrupting the official Republic Day military parade on Rajpath, in consultation with the Delhi Police.

The protests have turned out to be the world’s largest-ever farmers movement, with supporting country-wide protests and demonstrations. Attention of international media to this is undoubtedly causing embarrassment to the government, the ruling party of which is focused on upcoming state elections.

These events may well occupy international news spaces, since the January 20 climax of the unprecedented US presidential drama is behind us.

All the foregoing notwithstanding, the farmers-government match concerning repealing the farm laws, continues. Score 15-Love due to the Kisan Sansad and Kisan Parade. Time will tell how and when the farmers’ unions, joined by many workers and other sector groups country-wide, will coalesce, to take the score to 30-Love.

Or how and when government will use its considerable intelligence assets or the draconian NIA to break-up the protests, or apply police force upon peaceful protestors to take the score to 15-All, but risk a conflagration. For now, the “ball” remains in play.

The farmers at the various “gates” of Delhi are reportedly determined to remain there for many more weeks, even while farmers from states even as far south as Kerala and Tamil Nadu are joining them. To the farm-laws-repeal demand, the demand of assured MSP has been added by diverse groups including coffee farmers from Karnataka, thus increasing the pressure on government.

Farmers are clear in their minds that if the new farm laws are implemented, it means loss of their lands and livelihoods to corporate contract farming. There is also spreading awareness that the urban and rural consumer of farm produce will be hit by rising food costs due to corporate hoarding legitimized by the Essential Commodities (Amendment) Act, one of the three impugned laws. Further, the farm laws cease government procurement, hitting the PDS system upon which millions of poor depend for survival.

The role of government in enacting the farm laws is seen as being subservient to corporate interests. Although government strenuously denies this, and insists that the farm laws are in the farmers’ interests, the farmers – and increasingly, many others who are reading the text of the new laws and understanding their implications – remain unconvinced.

Following accusations of terrorist/ Khalistani links in the protests even in the Supreme Court, farmers are concerned, hurt and angry as the NIA issues notices to farmers, activists, scholars and journalists, who are supporting the peaceful and non-violent protests.

Government undoubtedly has the power to implement the laws, although its authority to do so is questioned by growing numbers of people. In the event that this happens, government may win the current game, but not the match.

A major reason that the farmers continue to hold the initiative is that their leaders are ensuring that the protestors remain peaceful and non-violent, and are sure that the truth of their demands will ultimately prevail. To paraphrase John Lennon, if you use violence, you are playing the government’s game – government doesn’t know how to handle non-violence. Farmers remain watchful of planted agents provocateurs provoking violence.

A certain great man in the past, whose hallmark spectacles are the logo for the swachh bharat abhiyan, demonstrated the strength of truth and non-violence, satya and ahimsa.

During World War II, when superior Nazi German forces invaded Soviet Russia (Operation Barbarossa), the retreating Soviet forces adopted a “scorched earth” policy, burning crops, destroying bridges and buildings, and evacuating factories. Even though this caused untold suffering and hardship to the Russian people, it seriously hampered the attacking German forces. The German advance was halted and then reversed, Soviet forces then advancing on Berlin to join in the final defeat of Nazi Germany.

Farmers may not be aware of this military history, but it is whispered that farmers may be considering some peaceful and non-violent method to withstand the onslaught of the hugely superior government forcefully implementing the farm laws.

Farmers would grow food crops and no other crops, that too only in sufficient quantities for the consumption of rural communities – land-owning farmers, tenant farmers, share-croppers, farm labourers, etc. – alone. This would require unprecedented cooperation within and between villages and rural communities, cutting across caste, sex, religion and class barriers – veritably social reform bottom-up. A beginning at overcoming these barriers may be observed at the on-going protest sites. Obviously it will take much strenuous planning and doing, to mitigate inevitable hardship and suffering within the rural communities.

Farmers would not sell surplus produce to the market, denying the corporates food produce for stocking, trading and commerce. The FCI and the PDS having been virtually shutdown by the new farm laws, urban areas would also experience food shortages. This would cause the politician-bureaucrat-corporate nexus and the comfortable urban middle class to wake up to reality of their need for farmers three times every day.

Although such measures will surely cause the farmers themselves and their families enormous hardship and suffering, in the balance it may yet be better than irretrievable loss of land and livelihood and utter defeat by destitution, due to implementation of the new farm laws. Equally importantly, it may revolutionize the way in which the nation understands the real meaning of the word annadaata, and people’s real-time total dependence on farmers.

Major General S.G.Vombatkere (Retd) writes with a focus on development and strategic issues. 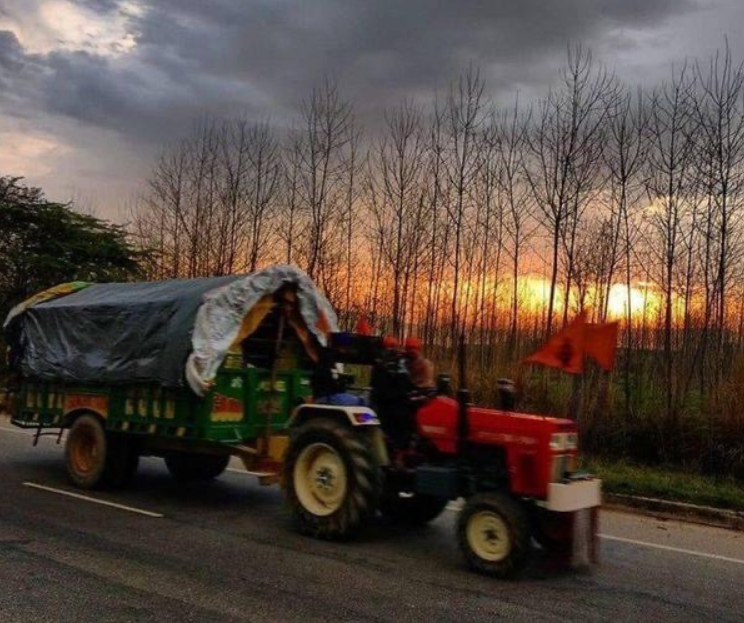