Is the Delhi Border Fortification Legal?

Delhi Police’s panicky fortification of our national capital with concrete bollards, trenches, metal spikes and concertina wires against unarmed farmers reminds us of the fear in 1739 when Persian dictator Nadir Shah invaded Delhi after routing the Mughal army to massacre 20,000 Delhi residents.

One can understand the official nervousness after the Republic Day bedlam when a section of farmers rioted, causing heavy damage to the national monuments and injuring scores of policemen. However, such grossly disproportionate fortification may appear provocative, bizarre and intimidatory when the massive “Farmer Protests-2” have been quite peaceful.

Also, the unusually strong statement by our Ministry of External Affairs on Wednesday rebutting the global twitter support to the protest movement by leading foreign personalities conveys a negative image.

So are the disruption of internet at the protest sites and threats to Twitter to delete certain texts.

Public warnings by Bihar and Uttarakhand police on February 3 that participation in protest rallies would blot citizens police background checks for passports, jobs and bank loans remind of our colonial era, reminiscent of the post-coup Myanmar.

Any justification that the fortification is to prevent a repetition of the January 26violence will be unconvincing, as by now it is clear that the disturbances would not have occurred had the government been more sensitive during their prolonged dialogue with farmer representatives.

Similarly, the Republic Day violence could have been contained had Delhi police acted on advance intelligence about possibility of subversive elements infiltrating into the otherwise peaceful protests by the majority of farmers.

It finally turned out that the leader who led his army of hooligans to the Red Fort was well known to the ruling party, laying bare the possibility of someone influential using such elements to tarnish the peaceful mainstream movement. Instead of tracing him and others, our government is using that violence to punish the peaceful majority by launching prosecutions, which had inflamed more villagers.

My understanding is that the Delhi police is now caught in a bind, much like the London Metropolitan Police(MET) from 2001 onwards, especially in 2009 during the London G-20 Summit protests. In those days global protestors used to descend on every G-7 or G-20 Summit city.

The MET decided to try out a new method of crowd management tactic called “Kettle” under “Operation Glencoe”, faced with repeated protests from “Put People First”, an international coalition of 160 civil society NGOs who invariably appeared at all G-20 Summits.

It was puzzling why MET used the word “Glencoe”, which is repugnant to the Scots. Glencoe is a “glen”(Valley) in Scotland where the entire Macdonald clan was massacred by the English troops aided by a rival clan Campbells on 13 November 1692. Under the “Kettle” or “Kettling” tactics, the police would confine the demonstrators to one area for hours to prevent them from spilling out for causing further disturbances. That meant physical discomfort to the demonstrators including not having toilet breaks.

This was first tried out on May 1, 2001 at Oxford Circus, London for 7 hours against “Anti-Globalization” protestors. The G-8 Summit in Genoa in 2001 also had witnessed violence in which one protestor was killed and hundreds were injured.

After these incidents, three foreign nationals sued the MET in the European Court at Strasbourg under Article 5 of the European Convention of Human Rights. They also sued MET at the House of Lords. The latter ruled in favour of police holding “Kettling ” as “necessary, proportionate and lawful”.

The 17 member “Grand Chamber” of the European Court too ruled in favour of the police as long as it was enforced for a “reasonably necessary period” and if undertaken to avoid personal injury and damage to property.

However, the “Kettling” during the G-20 (March 31-April 1, 2009) became messy, the responsibility of which rested with both protestors and police. Significantly, The Guardian(UK) had predicted on 27 March 2009 with a report “Fears Police Tactics at G-20 Protests will lead to violence” that it would be violent as the MET had determined to be tough with a policy of "up for it, and up to it".

Protesters numbering 35,000 came from 19 countries to the Central London. It soon assumed the shape of a carnival of protests against all sorts of causes like the British banking system, climate change, global poverty, Israeli atrocities, nuclear proliferation and so on. They said that the G-20, representing rich nations, were enjoying an opulent hospitality at the expense of poor nations.

The “Squats” started on 31st March at 4 places. Tents were set up, food stalls opened and on April 1, 2009 they marched in four processions to the city centre as the “Four Horsemen of the Apocalypse”. The police “kettled” 5,000 protestors for several hours without food, water and toilet breaks. The public used London Underground as open toilets.

The riot police pushed them with batons and shields. In the melee, a news paper vendor named Ian Tomlinson, who was a non-protestor was pushed down by a police officer. He later died in the hospital. The police were severely criticized for hitting demonstrators even sitting on the ground with “Hands Up”.

Even the MET commissioner said that the police exceeded their authority especially by threatening to arrest journalists. The Commander of the MET squads leading police arrangements blamed the misconduct of his officers due to lack of training as they could train only for 2 days in a year. On 14 April 2011 the High Court ruled that the MET broke the law by the way they “kettled” protestors as it was not “necessary or proportionate”.

Similarly, 45 officers including 5 senior officers of the Toronto Police were punished and 2 criminally charged in 2012 for “kettling” demonstrators in one place for 4 hours during heavy rains during the G-20 Summit in 2010.

It is possible that our courts too might go by the principle “Necessary or proportionate” while deciding on our version of “Kettle” through trenches, metal spikes and concertina wires for confining farm protestors. 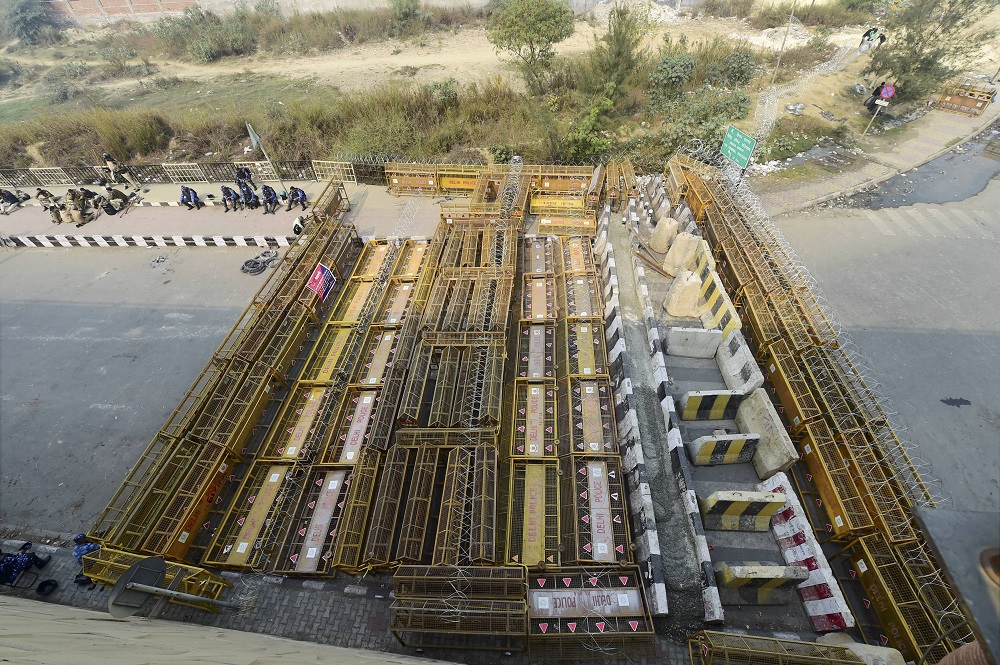