The Lady and the Military - Mirror Images!

History repeats itself, but with a difference

History is the devil’s scripture, and the irony was brought home by the return of the Junta in Myanmar (erstwhile Burma).

On July 19 1947, a 32 year old, General Bogyote Aung San, serving as the 5th Premier of the British Crown Colony of Burma, was assassinated by rivals from the Burmese Military. Before that bloody end, Aung San had been a tempestuous revolutionary who had flirted with various political ideologies and international ‘allies’ to win Burmese independence.

He was also the founder of Myanmar Armed Forces (Tatmadaw) – a small and disunited force then, that too had switched alliances from the Japanese to the Allied Forces, only to see power challenges leading to the brutal assassination of General Aung San.

The sudden end of the life of a rising star who was tipped to take over the leadership role in independent Burma, was replicated 73 year later with General Aung San’s daughter, Aung San Suu Kyi, albeit, politically not physically.

The serendipitous role of Myanmar Armed Forces (Tatmadaw), founded by her father, was at play again with the latest coup d’état on Feb 1 2021, just as Aung San Suu Kyi’s party had won the popular mandate. ‘Palace-intrigues’ and insecurities, which had fractured Myanmar’s introduction to democracy at independence, resurfaced seven decades later, reconfirming that the same restlessness and tenuity with democracy, persists.

After an uninterrupted rule by the Junta for nearly 50 years (1962-2011), much was expected from Aung San Suu Kyi, as the flagbearer and hope for democracy in Myanmar. Despite the initial push-back by the Junta disregarding her electoral victories in 1990 and 2011, her party National League for Democracy (NLD) finally took charge in 2015.

But for a constitutional technicality that denied her the official leadership designation, she was the face of NLD’s five-year term (2015-2020). But despite the euphoric expectations that preceded her arrival onto the centerstage of governance, Aung San Suu Kyi has less-than-lived-up as the beacon of democracy and morality.

Nearing the end of her first five-year term in 2020, Myanmar’s democracy was still rated as ‘authoritarian’ as per the Global Democracy Index, with it having amongst the worst slides in sovereign rankings, over the previous assessment year. Clearly the global honeymoon with Aung San Suu Kyi had waned, and she was looking increasingly suspect in her democratic commitments.

In 1991, Aung San Suu Kyi had won the Nobel Peace Prize for, ‘her unflagging efforts and to show its support for the many people throughout the world who are striving to attain democracy, human rights and ethnic conciliation by peaceful means’. At her acceptance speech, Aung San Suu Kyi mesmerised the world with her sensitivity and promise to the path of democracy when she quoted from her favourite passage in the preamble to the Universal Declaration of Human Right, “……. disregard and contempt for human rights have resulted in barbarous acts which have outraged the conscience of mankind, and the advent of a world in which human beings shall enjoy freedom of speech and belief and freedom from fear and want has been proclaimed as the highest aspirations of the common people”.

Alluding to the reality of ethnic-religious divisions that ran deep in Myanmar, she had movingly noted, “We have not been able to develop the trust and understanding necessary to remove causes of conflict” and then went on to end her speech with a hoary intonation, “History had given us the opportunity to give of our best for a cause in which we believed”.

After 25 years of her Nobel speech, history would record a very different variant of a practicing democrat in office.

As the de facto leader till the coup d’état a week back, Aung San Suu Kyi, had exhibited the eerily familiar strains of exclusivism, racism and chauvinism that defined the Junta rule earlier.

The murmurs of her cronies and confidants acquiring controversially large roles in the ‘opening up’ of the economy, was essentially replacing the entitled Generals from positions of power with equally non-expert, NLD cadres.

But it was her handling of the ‘stateless’ Rohingyas that shook the international community – the violent persecution and displacement of nearly 700,000 Rohingyas, drove people to reread her Nobel Peace Acceptance speech to reconfirm, if indeed it was the same person?

Aung San Suu Kyi resorted to flat denials like describing the international outrage at the world’s largest refugee problem as an, “huge iceberg of misinformation”. She played it all down by insisting that claims of ethnic cleansing were, ‘too strong’, refused to verbalise ‘Rohingya’ by name, and counter-contextualised it further by insisting, “Muslims have been targeted but Buddhists have also been subjected to violence” etc.

But, the cookie truly crumbled when she herself defended her Military against allegations of genocide at the International Court of Justice. The wily politician may have got discredited internationally, but she was playing to the majoritarian sentiment domestically, and fortifying her own electoral prospects.

Claiming to be a Gandhian she cozied up to China, signed the BRI (Belt Road Initiative) imperatives and dialed-up nationalistic fervour, So much so that the trump card of ‘nationalism’ seemed to be slipping away from the Military to ‘The Lady’ (as she is locally addressed) – potentially threatening the exclusive reservation of 25% seats in Parliament for the Myanmar Military.

Despite international opprobrium, Aung San Suu Kyi had a 79% approval in a survey conducted by the People’s Alliance for Credible Elections (up from 70% in the previous year). Unsurprisingly, Aung San Suu Kyi’s reckless majoritarian paid off with her 2020 elections results bettering her 2015 win, and leaving the Myanmar Generals clearly disappointed.

Circumstantially, it did not help matters that the incumbent Commander-in-Chief of the Myanmar Military, Min Aung Hlaing, was backing the opposition forces but also expected to hang his uniform later this year. The dour, brooding and ambitious General Min Aung Hlaing had made his displeasure about the electoral results known publicly, and as the new Parliament was set to open, the Junta moved in.

The world watched the redux of Junta take-over through a chance video of an oblivious aerobics’ instructor, who was ironically dancing to lyrics, ‘They are coming one by one, to fight over the throne’!

Indeed the throne has been taken over for at least a year and in standard language from the playbook of authoritarians, the General has declared emergency, promised ‘free and fair elections’ in a year and detained NLD leaders, including General Aung San’s daughter, Aung San Suu Kyi.

While the international community is circumspect about the ensuing developments in Myanmar, Aung San Suu Kyi’s diminished credentials as a democrat do not help her personal cause. 2021 will not be like 1990 or 2010 in terms of international outrage at the loss of democracy, and partly the blame for the same will have to be shouldered by Aung San Suu Kyi, herself.

The most immediate neighbours on the East and North like China, Cambodia, Thailand and Philippines have called it a ‘internal matter’, whereas the India expressed a decidedly ambiguous, ‘noted the developments in Myanmar with deep concern’.

It was only the distant and less relevant, United States (with 1/10th of trade stakes of Myanmar vis-à-vis China) that made a bolder statement, “The United States opposes any attempt to alter the outcome of recent elections or impede Myanmar’s democratic transition, and will take action against those responsible if these steps are not reversed”.

The reality is a lot more complex than just about the regression of democracy – it is one of a potential democracy surrendered at the altar of personal ambitions, institutional turf wars and illiberalities, that defined the conduct of all players.

No one comes out smelling of roses in the Myanmar drama, certainly not the Junta, nor even the ‘undemocrat’ Aung San Suu Kyi, who was ultimately done in by the Junta. History has repeated itself. 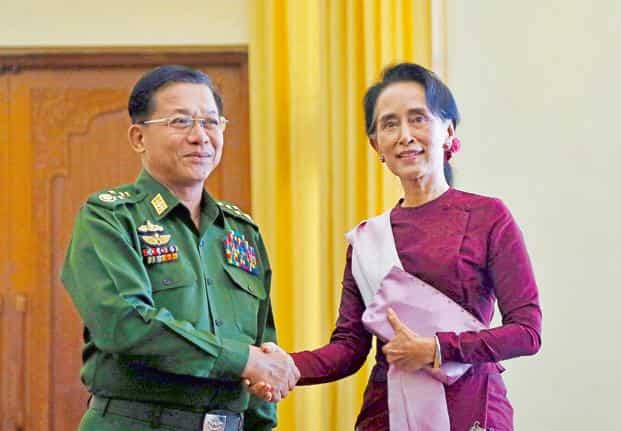