21 PARA (SF) or the Waghnakhs’, as they are well known, is a unique Special Forces (SF) battalion, as it is the only SF battalion that has been converted from an existing infantry battalion.

The Infantry battalion was the 21st Battalion of the Maratha Light Infantry Regiment. Although this battalion was raised on February 111985, it was part of one of the senior most regiments of the Indian Army, which has recently completed 250 years of service in the Indian Army in August 2018.

In early 1990s, a major exercise was undertaken by Army Headquarters to convert the then existing three Para Commando battalions into SFs and increase the strength by another battalion. I was the DGMO at that point of time and had implemented this change.

A major change in the roles of the units, making them more akin to Special Operations Forces (SOFs) of other countries, was formalised. I also had the honour of being appointed the first Colonel of the newly formed SF, the only time they moved away from being just super-infantry!

However, the change was short-lived, because the Parachute Regiment, of which the three Para Commando battalions were part of, did not countenance these battalions going out of the Regiment and as soon as I moved out to command a Strike Corps, the then Chief succumbed to the pressure from the Parachute Regiment lobby and the units reverted to again becoming super-infantry! But that is a different story!

This narrative is about the current 21 PARA (SF). 21 Maratha LI had been selected for the conversion, as all other Infantry Colonels of the Regiments had chosen not to part with any of their battalions. Being the Colonel of the Maratha Light Infantry at that time, we had the foresight to offer one of our Maratha battalions for conversion, as we were convinced that it was in the national interest. In addition, we had given many of our battalions to other regiments in the past and all had done extremely well and had brought laurels to both regiments.

21 Maratha LI completed its conversion to Special Forces on 01 Feb 1996, after successfully completing its gruelling probation over two years. The outfit thus holds the unique distinction of being the only infantry battalion to have been directly converted to Special Forces.

However, our overall aim of making the then existing three (1,9 and 10) Para Commando battalions plus the new 21 Para Commando to exclusive Special Forces units lay in ruins, as explained above.

The Blood, Sweat and Grit of all the torchbearers involved in bringing the unit to the present pedestal needs to be applauded and cherished. On this day, 11 Feb 2021, the Waghnakhs are celebrating their Silver Jubilee of Conversion.

A about their nom d’ guerre Waghnakhs. The Wagh Nakh or Tiger’s Claws is a typical Maratha weapon of Shivaji’s time, which is a knuckle duster of steel flanked by two finger holes through which the thumb and small finger are inserted, concealing three to five curved blades in the palm of the hand and turning the wearer's hand into a tiger claw.

For complete concealment, the knuckle duster could be decorated with gems giving the appearance of wearing rings. The blades, like the tiger claws they are named for, are made to slash through an opponent's skin and muscle. In some cases, there is the addition of one or two blades that project from the side of the wagh nakh, an additional weapon that would have been used for jabbing, or thrusting. 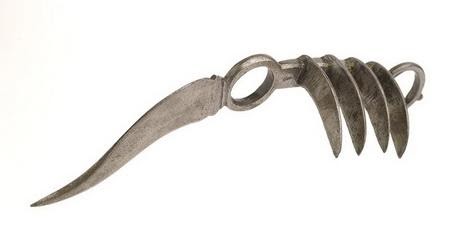 The wagh nakh is most often associated with the Maratha warrior Shivaji, who fought under Islamic rulers -- the Moghuls in the north and various independent Sultans in the Deccan. In 1659, a meeting was arranged between Shivaji and General Afzal Khan of the Bijapur Sultanate. Shivaji suspected that the General would try something tricky and so wore chainmail under his clothing and a wagh nakh in his hand.

When the two leaders embraced, the traditional greeting, Khan tried to attack Shivaji with his dagger but it failed to pierce Shivajis chainmail. Shivaji then used his hand with the small, concealed wagh nakh and, like a tiger, clawed Khan, inflicting mortal wounds.

Reverting to 21 PARA (SF), the Paltan specialises in Jungle Warfare, although it has taken part in many operations in rural and urban settings too and has left its mark in the entire north eastern part of our country. One may recall that following the terrorist attack on an army convoy in Manipur a few years back, it was 21 PARA that had carried out a surgical operation in the border areas of Myanmar and given the terrorists and insurgents a befitting reply. The operation under command of the then Commanding Officer of 21 PARA (SF), Colonel Saurabh Singh Shekhawat was a complete success where only terrorists were neutralised and there had been no collateral damage or any casualties to our troops.

I am given to understand that both the serving ‘Colonels’ of the Maratha Light Infantry, Lt Gen Asit Mistry and of the Parachute Regiment, Lt Gen Paramjit Singh Sangha would be present for the celebrations of the Paltan. The Army’s SFs units are arguably the best infantry units in our Army, but despite their nomenclature of SFs, they do not fall in the category of Special Operations Forces (SOFs) of countries like USA, Russia or UK, whose top rated units: US Delta Force; Russian Spetsnaz; and British SAS, are SF units in the classical genre.

We do have the potential and professional zeal to become like the above quoted units, as our officers, JCO’s and Jawans are the best, but we are far too mired in regimental issues and non-issues and our hierarchy is far too risk-averse! The other reason is that although our SF Units have won many a battle, they get stymied by our Ministry of Defence (MoD) manned by civilian officials, who neither have the expertise nor the desire to learn about how the army operates and the sense of urgency.

Unless the SF are modernised on a continuous basis in terms of the latest weapons and other warlike equipment, we will not be able to utilise the full potential of these special troops, which have an increasingly important role to play on the future battlefield. In the 25 years of its existence since the conversion from 21 Maratha LI to 21 PARA (SF), the battalion has shown its mettle; won both battles and laurels and has become a most effective and fearless machine for the battles likely to be faced in future. More power to this exuberant SF battalion that at the moment of writing is carrying out a para jump by both serving personnel and veterans of the battalion, commemorating their Silver Jubilee.