I had no business to forget Badshah Khan’s 130th birthday this February, having been his press secretary when he came on a year’s “healing mission” as guest of both the political camps led by Indira Gandhi and Jayaprakash Narayan.

The international system is trying to compose itself today. It was dividing itself sharply during the Pashtun leader’s visit. Just as India became salient to regional play then, it will by force of circumstances, become part of the new regional pirouette.

Pakistan was incorporated into the Baghdad Pact, CENTO, and such like military alliance as bulwark against the Soviet Union. Also, Industrial production of oil had to be protected in the Persian Gulf. On India was conferred the elaborate task to secure a liberal democratic polity which would keep nefarious ideas like Communism and Marxism at bay.

That was the responsibility given to India by the imperial order. And how dutifully New Delhi has fulfilled that role. Demonization of “Urban Naxals” is a crude variant on the theme pursued by the Congress party since its earliest days in power. Remember how Indira Gandhi as Congress President (Nehru was the Prime Minister) had President’s rule imposed to dismiss the world’s first communist government elected by the ballot box in Kerala.

The E.M.S. Namboodripad government had been voted in 1957. Mrs. Gandhi sought US Ambassador Ellsworth Bunker’s help to discredit this government by helping organize street protests. This would give the centre an excuse to dismiss the government and impose President’s rule. This operation was revealed by Bunker in a Podcast at Columbia University.

This brings me to Badshah Khan’s visit in 1969 when Indira Gandhi, as Prime Minister, played a hand ideologically quite the opposite of what she did in Kerala a decade earlier. She split the Congress Party, weaning away the party bosses close to capitalists and proceeded to nationalize banks. The correspondent of the Times London, Peter Hazelhurst, summed up Indira Gandhi succinctly: she is a little Left of self interest.

As a matter of fact she had at this stage moved more than a “little” to the Left. Not only did she have in her cabinet a once card carrying member of the Communist Party, Mohan Kumaramanglam educated at Eton and Cambridge where his education coincided more or less with Kim Philby’s innings at Cambridge but he became an influence on her.

He enunciated what came to be known as the Kumaramangalam thesis. President S.A. Dange of CPI joined hands with Indira to make up for the shortfall in numbers in the Lok Sabha. The CPI described it as a policy of “Unity and struggle”. In other words “we struggle” against Congress’s “anti peoples” policies and unite on its socialist programmes.

This leftward lurch reached a climax when Soviet advisers helped New Delhi’s 1971 Bangladesh operations. The high Soviet profile in these operations was the principal reason for Nixon-Kissinger to order the 6th fleet in the Bay of Bengal, as a check.

The fierce East-West competition induced a parallel internal Right-Left competition. As her comfort level with the Left increased, the powerful Congress party satraps, expelled by Indira Gandhi clasped the hands of compulsive anti communists, anti Congress, Hindu nationalist, all on the capitalist page, under the leadership of arch Gandhian, Jayaprakash Narayan. It came to be known as the Bihar movement for “total revolution”.

This movement itself had antecedents, both internal, like Gujarat’s Navnirman Samiti agitation and external, like the Grosvenor Square demonstration in London and the barricades in Paris which shook De Gaulle. In fact the cusp of 1968 and the 70 were momentous – Prague Spring, Tet offensive (Vietnam), Martin Luther King’s assassination, Robert Kennedy’s assassination.

These traumatic events were chronologically proximate to the Congress split, Navnirman agitation (Gujarat) and, JP movement in Bihar, the state with a powerful communist party which, unlike elsewhere in India, had not split into CPI and CPM following the Sino-Soviet split of 1964.

Although the Bihar movement projected itself as anti corruption, it was primarily aimed at seeking regime change at the centre and the state to give advantage to anti Left forces in Bihar where the communists and a Left inclined Congress – I (I stood for Indira) had retained their power.

It was the thrust of JP movement combined with the Allahabad High Court judgement unseating Indira Gandhi – a double fisted punch which unnerved Indira Gandhi to the extreme. She imposed the Emergency in 1975.

Conspiracy theorists advanced a right wing plot. Indira Gandhi had walked straight into the post emergency elections which colleagues like P.N. Dhar advised her to undertake. These held in 1977 brought to power the Janata Party, consisting of every political formation under JP’s banner including the tallest leaders of what is today the BJP – Atal Bihari Vajpayee and L.K. Advani. The Right had got the opening it was eyeing.

An Agatha Christie like twist to this tale was my conversation with Chester Bowles in the US. Afflicted by galloping Parkinson’s disease, Bowles used to whisper into a pipe which his secretary decoded. When he heard of allegations in the Lok Sabha about the CIA having placed a device on the Nanda Devi to spy on the Chinese, Bowles sat up from his reclining position. “But Indira had asked me to.”

Indian independence coincided with the Cold war. Continuous interplay between the external and internal was built into the script. And now that world order, unrecognizably smudged during the Trump years, is reshaping itself with Biden’s inauguration, what lies in store for Indian politics which was fractured in two during Badshah Khan’s 1969 visit? 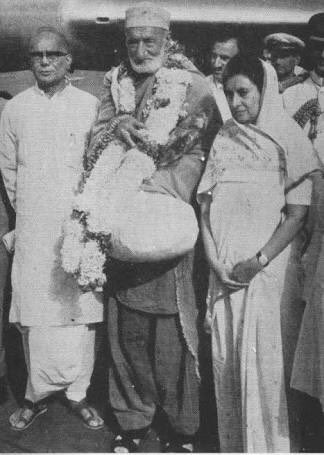 How Effective are Embankments in Controlling Floods? 9 hours ago

Assam-Mizoram Police Set New Precedent, Open Fire at Each Other