It was an expose of the interest groups that dominate the narratives on America’s ‘forever wars’. Clifton made a case study of the controversial report by a group of experts established by Congress, which recommended that the White House should extend the May 1 deadline for withdrawing troops from Afghanistan, as stipulated under the Doha pact with the Taliban.

But the fine print is: “Two of the group’s three co-chairs and nine of the group’s 12 plenary members… have current or recent financial ties to major defence contractors, an industry that soaks up more than half of the $740 billion defence budget, and stands to gain from protracted U.S. military involvement overseas.”

One of the co-chairs named is General Joseph F. Dunford, formerly Chairman of the Joint Chiefs of Staff, commandant of the Marine Corps, and Commander of all US and NATO forces in Afghanistan (2013), and is now serving on the board of Lockheed Martin, and holds approximately $290,000 worth of stock in the arms manufacturing conglomerate under a devious scheme to award stock to directors in order to “further align their economic interests with the interests of stockholders generally.”

Clifton estimated that “the study group’s plenary is deeply intertwined with the military industrial base, with nearly $4 million the group’s co-chairs and plenary have received in compensation for their work on the boards of defence contractors.”

Clearly, Biden administration’s Afghan-policy making is skewed insofar as all of the advice it gets is heavily dominated by people with financial stakes in continuing the war. It was US president Dwight Eisenhower, the only general to be elected president in the 20th century, who first warned about the corrupting influence of the military-industrial complex, when he said famously in January, 1961 in his farewell address, “In the councils of government, we must guard against the acquisition of unwarranted influence, whether sought or unsought, by the military-industrial complex.”

The Indian narrative on the recent disengagement of troops on the disputed border with China in eastern Ladakh fits the above description in certain ways, although India doesn’t yet have an avaricious military-industrial complex. Logically, the disengagement of troops in Eastern Ladakh ought to be a cause for celebration that the war clouds have dispersed. Even Chinese experts acknowledge that the disengagement signifies a “a key breakthrough” that hopefully leads to peace and stability in short and medium term.

Looking ahead, pre-conditions now exist for a positive turn to the India-China bilateral relationship. Arguably, the recent India-China consultations over the upcoming agenda in the UN forum and an exclusive Reuters report on Tuesday that the government is getting ready to clear some new investment proposals from China in the coming weeks are discernible signs that the disengagement agreement is gaining traction.

A top Chinese expert, Qian Feng, director of the research department at the National Strategy Institute at Tsinghua University, a highly prestigious institution internationally, wrote yesterday that the disengagement agreement is “a wise and pragmatic decision” by the Modi government “after weighing the country’s interests at both home and abroad.”

No doubt, the decision is in India’s national interests. Frankly, the curtailment of economic ties with China was an unrealistic move. India’s imports from China actually increased in the second half of last year and China surged as India’s number one trading partner, surpassing the US.

Rolling back Chinese investments in the Indian economy was a self-defeating policy, as post-pandemic economic recovery and job creation ought to be national priorities. China becomes an irreplaceable partner, given the state of world economy.

Belatedly, the government realises it. But it remains to be seen whether the Chinese investors are about to get engaged with Indian economy. The systematic factors that inhibit western investors are also applicable to Chinese investors. Clearly, western companies relocating from China to cut production costs prefer Vietnam or Taiwan to India.

India stands outside the Asian supply chain, which the RCEP is expected to consolidate. Above all, there is the trust quotient. Despite the disengagement in Ladakh, the mutual trust in India-China relations has hit rock bottom.

This is where the creation of buffer zones in the disputed border areas assume significance. Such underpinnings enhance mutual confidence and ensure that peace and tranquility is sustainable.

The stunning disclosure recently by minister VK Singh, a former army chief, that Indian ingressions must be five times the number of Chinese ingressions historically, underscores the criticality of buffer zones.

Yet, Indian analysts bemoan the creation of such buffer zones, saying it deprives the army from conducting “patrols” in disputed territories. Now, border transgressions can always be monitored through technical means, whereas, patrols risk face-offs. The government decided to prioritise peace and tranquility on a sustainable basis.

Why do Indian analysts look crestfallen? Fundamentally, the adversarial mindset inculcated through decades of indoctrination since 1962 explains it. As happens in opaque circumstances, interest groups proliferate, like mushrooms in damp soil.

VK Singh’s disclosure is a rare acknowledgement of ground realities which successive governments through past decades obfuscated as a mater of political expediency. Having said that, the government’s decision on disengagement cannot and should not be a ‘stand alone’ decision. Downstream developments in the political and diplomatic arena become highly relevant.

Any student of the Sino-Russian border settlement would agree that the October 2003 pact, which fully settled the intractable dispute, including the vexed question of control over the three islands in the Amur and Argun rivers, was only possible due to the mutual desire to strengthen the developing Russo-Chinese strategic partnership “in all areas, based on shared basic fundamental approaches to key issues of world politics” — to quote from the then Russian foreign policy concept (which, curiously, had also called for a “Russia-India-China triangular format”, although Delhi ignored it.)

Clearly, India and China have a lot of ground to cover to reach the ‘October 2003 moment’ in their relationship. The US will not probably countenance such a moment, either, as sans India, its Indo-Pacific strategy will remain a damp squib. Nor is India’s foreign-policy trajectory leaning toward a quasi-alliance with the US going to be helpful. The untimely QUAD meeting yesterday that Washington convened bang in the middle of the disengagement in the Himalayas highlights the contradiction in the Indian policies.

Suffice to say, India also has a powerful pro-American lobby clamouring for “forever wars”. Sinophobia feeds into it seamlessly. This lobby will only gain ascendancy, as India develops a defence industry and the corporate interests and their eventual nexus with the defence establishment come into full play, inevitably, in the domain of foreign and security policies.

Eisenhower was prescient in laying down the red line universally applicable to all democracies upholding the civilian supremacy, but it is easier said than done. Thus, the ‘forever warriors’, being the best organised and best-endowed faction — and highly motivated too — almost always prevails, in the final analysis. 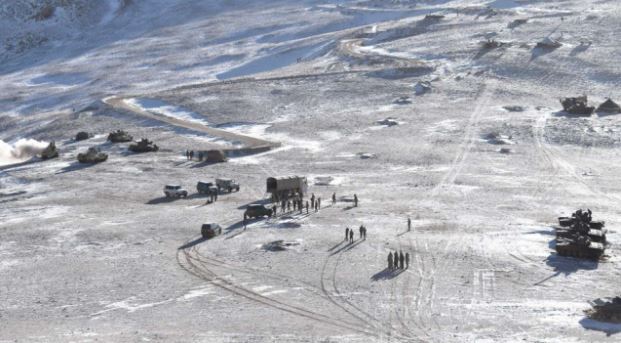 Cover Photograph: Disengagement between Chinese and Indian forces at the banks of the Pangong lake in Eastern Ladakh.