’Language is the road map of a culture’

Over time, every generation usually has a more evolved sensitivity that seeks to correct, refine and address inadvertent pejoration in common expressions and language. Many words, metaphors or jests that were once part of a generation’s lingua franca are then shunned for their inappropriateness or contextual unsuitability.

Feminist writer, Rita Mae Brown, says, ‘language is the road map of a culture. It tells you where its people come from and where they are going’. This necessary process of intellectual filtration is only halted when the free air of questioning and accommodation gives way to stifling throes of absolutism, revisionism and suppression of thought and spirit.

The tenor and stylization of leadership-language used in an era, time or place that revers liberality, inclusivity and democracy is starkly different from that used in an environment that is autocratic, insecure and prejudicial. Language syntax in the latter era structurally aims to mock, suffocate and remains boorish.

The glaring contrast of the Presidential ‘voices’ between Barack Obama and his successor, Donald Trump, exemplified the textures of the two Presidential tenures. While both spoke to impress their respective constituents and did an outstanding job of ingratiating themselves to their ‘core’ – the language was a give away of more things than one.

Trump deployed a brusque, boastful and denouncing rhetoric to his rather limited vocabulary, whereas, Obama remained carefully cultivated, reasonable and sophisticated to perennially posit hope for the proverbial ‘others’, with his patented flourish with words. At a certain period of time, in America’s constant yearn for a transformative leader, Trump sounded more decisive and ‘strong’ to a certain section, whereas Obama could have sounded indecisive and ‘all over the place’, to the same audience.

In democracies, such is the appeal of coarse ‘nativity’ (read, majoritarian) that it can make intelligence, erudition and measure look enfeebled. Trump understood that power of negativity, fear and hatemongering that even after over 30,000 recorded untruths, he still pulled 74 million votes!

The problem with Trump’s language is more subliminal, institutional and irreversible as he weaponised his retrograde thoughts and words with poisonous invectives and dangerously normalised the same.

The necessary optics of decorum, civility and restraint were not just sacrificed in the White House, but it extended naturalness for his supporters who lapped and appropriated his divisive agendas, tenor and words. America may look back and find itself poorer and wounded for those four years, in the long-term.

Lal Bahadur Shastri was not just a personification of simplicity and austerity in person and therefore in his language, but also for strength of character. There was a healing genteelness and clarity in his ‘voice’ that an unsure nation craved in those times. Shastri needed no oratorical extravagances, bluster or felicity with words. Today that same uncomplicatedness, linearity and empathetic pitch resonates in the language of a young New Zealand Prime Minister, Jacinda Arden, who tirelessly insists on using the word ‘kindness’ in most of her sentence structuring.

The science of linguistic relativism suggests that the language one speaks is the mirror of the mind in terms of vocalizing, how one truly thinks. Current British Prime Minister Boris Johnson deploys his magniloquent tongue to unleash imperial anachronisms (like his hero Winston Churchill whom he even apes in physical posture) and routinely peppers his theatrical language with quaint and classic Latin and Greek to subtly suggest pedigree, impeccability and conservatism to supreme effect.

But, perhaps like most vain heroes to themselves, he is also prone to frequent gaffes like ‘piccaninnies’, ‘letter boxes’ etc., that expose his sense of pompous entitlement and disdain for ‘others’, that ought not to exist in the 21st Century!

The lands of India belong to a timeless antiquity with a certain depth, finesse and profundity of its thoughts, texts and popular culture of debate and reason. Even its foundational ‘voice’ in the form of the sacramental language within i.e. Sanskrit (from Sanskrit samskrta, ‘adorned, cultivated, purified’), has an aesthetic and scientific quality about it that continues to rivet the uninitiated with its unmatched sophistication.

To this environment and ethos was born the quintessential, ‘Argumentative Indian’ who Nobel Laureate Amartya Sen says, could seamlessly cross-fertilize an intellectual polymath of spiritual, political and societal elements to propound the most progressive ideas, if it wanted to. So naturally integrative, vivid and assimilative are its instincts that tracing ownership of that Indian ‘voice’ to a specific founder or a holy book as its scriptural authority, is not possible.

It is a case of incalculable richness that potentially diminishes its sheen, when attempted to pin it to a singular source, reference or ownership. Popular language was an obvious and collateral beneficiary where the world’s oldest literature i.e. Vedas, Upanishads and Puranas, abounded.

Such treatises of intellect bestowed the principles of social, ethical and spiritual progress onto its inhabitants who frequently ‘questioned’, reformed existing norms, and were inherently ahead of their times.

A man considered amongst the greatest men of letters in modern age, Mark Twain, noted India as, ‘the cradle of the human race, the birthplace of human speech, the mother of history, the grandmother of legend, and the great grand mother of traditions. Our most valuable and most artistic materials in history of man are treasured up in India only’. India’s inbred tolerance, respect and celebration of ‘others’ spawned a diversity of languages that manifests in the popular aphorism, Kos-kos par badle paani, chaar kos par baani (the language spoken in India changes every few kilometers, just like the taste of water)!

Today, the air is getting heavy, insular and paludal with many seeking uniformity, conformity and obeisance to a singularity of source/idea, that is an anathema to the civilisational vividness, emotions and palpability of the land.

It is true that many times in the torturous corridors of history, India had to put up with reigns of intolerance, bigotry and crudity that shamed its civilisational mellifluousness – but India always triumphed, though only after paying a heavy price.

Now, one of the consequences of the current societal morass is the weaponising of its daily conversations with manufactured-hatred, that is unprecedented in its recent memory. We no longer seek to win arguments with the superiority and rigour of thoughts or ideas – but through intimidation, majoritarian and ridicule.

One staring example of its deteriorated ‘voice’ is to be found in the temple of its democracy i.e. Parliament, and the discourse within. Those who define the weave of the national discourse from the highest pulpit seem to focus more generously on electoral calculus, and seemingly abhor debates (if any?), shun questioning (if ever allowed?) and slam contrarian views.

This ‘celebration of illiberality’ normalises new lows by the passing day, as those in authority deride intellect, expertise or liberal thinking. Instead, they brutally posit their unquestioned opinion as ‘new facts’ that are instrumental in re-writing history, culture and the new-normal.

In the lands that once bore, nurtured and inspired liberality, secularity, civility etc. for the world at large, we have now introduced new phraseology that lampoons our civilisational wealth with lexicon like sickular, pseudointellectual, libtard etc. The ‘secondement’ of some by viciously teasing terms like ‘rice bag converts’, rote referencing to neighbouring countries or even to defunct insurgent movements (e.g. Khalistan) are no longer speculated in hushed tones – they are said brazenly with eyes locked on the screens.

Some with professions that are inherently given to questioning, are conveniently afforded the new favourite aspersion of anti-nationalism and are therefore presstitutes. Even ‘activists’ can acquire the same infamy as presstitutes.

The land that constantly pushed the boundaries of existing thought, even if it flew against the popular grain of the times that be, as proud ‘activists’, has now afforded a nom de guerre for ‘activists’ as pesky,seditious and meddlesome roadblocks towards some self-believed-nirvana.

This retraction does not behoove the land of Vivekananda, Gandhi, Tagore, Swami Dayanand, Sri Aurobindo, Guru Nanak, Dr Zakir Hussain or even the post-independence politicians like Nehru, Vajpayee, Shastri etc., who put the constitutional ‘Idea of India’ beyond their partisan preferences.

The language and ‘voice’ of these giants had a grace, rhythm and foresight that only time will value – if one had mastery in English, the other was exquisite in Hindi, and the third was supreme in his cryptic clarity, a clearly lost refinement of words, language and above all, soul.

Today, beyond words even pictures of divinity on the back window-shields of cars have acquired an unfamiliarly angry look and temper for our Gods, that unknowingly weaponises our thoughts.

India needs to heal, soothe and reclaim its soulful ‘voice’ and language. This does not imply weakness, attenuation or lowering of guard, but only to be all that it must be, but in a manner that befits an elevated civilisation and ‘moral people’ who have the wheel of Dharma in the centre of their tricoloured flag.

The first signal of the nation’s overall direction is to listen very carefully to the language used, and what is getting normalised – it is an unmistakable and accurate augury, and not what the politicians casually promise.

As Nehru famously said, ‘language is something infinitely greater than grammar and philology. It is the poetic testament of the genius of a race and a culture, and the living embodiment of the thoughts and fancies that have moulded them’. 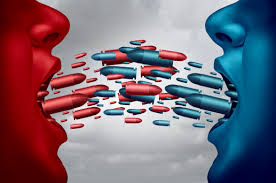