The media is facing tough times. Free and fair reporting is not being tolerated, particularly in states like Jammu and Kashmir and Uttar Pradesh. In UP journalists have been targeted with violence, arrested, and slapped with cases for basically reporting the ground reality. In Kashmir, it is worse, as journalists can barely function and when they do try they pay a price that is scary as the situation is tense, and given the politically charged environment the charge of sedition sticks easier than in other parts of India.

The latest to draw government ire is The Kashmir Walla, a brave and professional effort by editor in chief Fahad Shah and assistant editor Yashraj Sharma. Shah was called to the police station early morning and released a little later. “I am back now, thank you so much for your support,” Shah tweeted. The summons was ostensibly for a story carried by The Kashmir Walla about photographers being beaten up while covering protests in Srinagar. The report covered the incident as well as carried the version of the police in detail. However, even this seems to have become unacceptable in a terrain where conflict overrides democracy.

A FIR was also slapped on The Kashmir Walla by the Indian Army for a news report published on January 27 alleging that the soldiers forced a school in Shopian district to hold a Republic Day event. The editors have approached the Jammu and Kashmir High Court against the FIR saying that this was “clearly unconstitutional and against the law.”

The Judge has issued a notice to the police and the Army to file a report at the next hearing scheduled for April 2. The plea by the website said, “The petitioners were just carrying on their legal duties and reported a news item for which the petitioners fulfilled all the professional responsibilities as they were required to do and took utmost precautions for producing the correct version.”

It went on to add, “the complainant who has filed an application has neither read the news properly nor verified the contents from the sources. The news item is a piece of news based on facts collected by the newspaper and does not invoke the iron hand of the state to silent the dissenting voices.”

Reporters in Jammu and Kashmir have been fighting a tough battle to keep their heads above the rising waters. Occasional protests by the scribes seek to expand the shrinking space for professional work, with The Kashmir Walla a new enterprise that seeks to bring the news to the readers without fear or favour as it claims. It is not sensational, sticks with the news, does not comment or provoke or incite, but till date is a professional website covering news from the ED summons to Mehbooba Mufti in the money laundering case, to the grenade attack in Srinagar’s Fateh Kadal, to more national news such as the developments in the farmers movement. It is more about the state, and a quick glance brings those seeking information on Jammu and Kashmir up to date.

Perhaps this reportage constitutes the problem as the older newspapers in Kashmir are finding it difficult to survive the times. The Kashmir Walla offers a breath of fresh professionalism, led by journalists who keep close to the tenets and exhibit rare courage. It is imperative for journalists across India to extend support to Shah and Sharma and ensure that the website is able to survive, indeed flourish, in these times. The authorities are always welcome to discuss and talk out differences with journalists, correct them and if right demand an apology and retraction, but summons and arrests and FIRs constitute intimidation that does not fit into the practice of democracy in India. 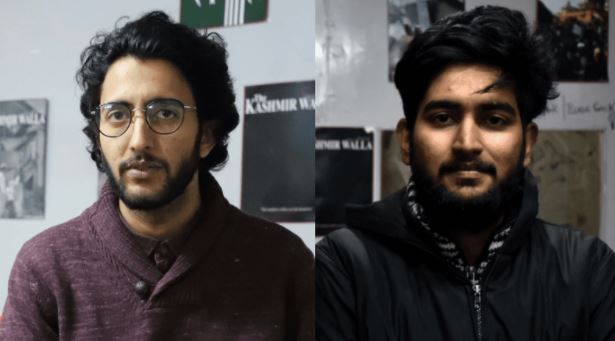