“Farmers should not go back empty handed”

On March 26, the farmers’ struggle completes four months. On that day, the Samyukt Kisan Morcha has given a clarion call for a Bharat Bandh to support the struggle.The last Bharat Bandh was on December 8, 2020, and it had turned out to be a massive countrywide success.

The various SKM struggle calls in the month of March were well implemented not only at the Delhi borders, but also throughout the country.

On March 6, to mark the completion of 100 days of the struggle, lakhs of farmers blocked the Kundli-Manesar-Palwal highway at all the borders.

On March 8, to celebrate International Women’s Day, thousands of women converged at the Delhi borders and all the stages were handled by women. The lion’s share of women in agriculture was stressed.

On March 15, the SKM fully supported the Central Trade Unions’ call against the Modi government’s drive for the privatization of public sector assets, and also against corporatization of agriculture and against the massive rise in diesel, petrol and gas prices. These actions were held all over the country. Lakhs of bank employees across the country struck work on March 15 and 16, and lakhs of insurance employees struck work on March 17 (GIC) and March 18 (LIC).

On March 17, the SKM invited leaders of all trade unions, trader and transporter organizations, and all other mass organizations for a meeting that will decide the future course of action in this struggle.

On March 23, the martyrdom anniversary day of Bhagat Singh, Rajguru and Sukhdev, the SKM has called upon students and youth all over the country to support the farmers’ struggle, and take forward the ideals for which Bhagat Singh and his comrades gave up their lives.

On March 28 begins the Holi festival. On that day bonfires will be made all over the country of the three farm laws, the four labour codes and the electricity bill.

On the day that the historic farmers’ struggle completed 100 days on March 6, Rajbir Singh, a 48-year old farmer from Hisar, Haryana, was found hanging from a tree near the Tikri border. He owned two acres of land, on which he grew rice and wheat. He is survived by his wife and two children. His was the eighth farmer suicide at the Delhi borders, among around 280 farmers who have been martyred so far.

In his suicide note Rajbir wrote that he was taking this extreme step due to frustration regarding the farm laws. He wrote, “To the government I am begging you to fulfill a dying person’s last wish, which is that the three laws be taken back. Bhagat Singh laid down his life for the country. I am taking my life for my farmer brothers.” The utterly callous and insensitive government remained unmoved.

Last month, another shocking case came to light about the ham-handed atrocities unleashed by the Delhi police which is directly under the central government. Gurmukh Singh is an 82 year old farmer from Fatehgarh Sahib village in Punjab, who served for 22 years in the Indian Army. He gallantly fought in three wars for India – the Indo-China war of 1962, the Indo-Pakistan war of 1965 and the Bangladesh liberation war of 1971. He retired from the Army in 1984 as Subedar and has been a farmer since then.

In the wake of the government-sponsored violence in Delhi on January 26, the 82-year old Gurmukh Singh was beaten and arrested by the police at the Burari ground even though he was not even remotely involved in any violence. He was thrown into jail for 16 days where he and the other arrested farmers faced hell. He was finally released on bail last month but the false case will continue.

Gurmukh Singh says, “I served in the Army for 22 years. I was given a lot of love and respect in the Army. I fought three wars for my country. I have been awarded 10 medals. And now they are calling me a terrorist. I cannot swallow this humiliation. Is this what I have to hear before I die? I am not able to sleep at night these days.” Gurmukh Singh is one among many farmers who have faced such an ordeal.

Meanwhile, the Dalit labour rights activist Shiv Kumar, the associate of Nodeep Kaur, about whom we had written in our earlier column, was finally released on bail on March 4, a few days after the release of Nodeep Kaur, after spending nearly two months in jail in torture at the hands of the Delhi police.

On March 5, the Punjab state assembly passed a resolution against the farm laws, following the state assemblies of Kerala (which was the first to do so) and some other states.

On March 8, bowing to a petition that got over one lakh signatures from the citizens of Britain, the British Parliament debated the situation in India arising out of the enactment of the three farm laws. Most of the MPs who spoke were critical of the handling of the protest by the central government.

Last week, in the Freedom House report on ‘Freedom in the World 2021’, India, the world’s most populous democracy, for the first time dropped from ‘Free’ to ‘Partly Free’ status. Apart from many other factors that have contributed to this, this is borne out by the many-sided repression launched by the BJP regime against the farmers’ struggle and its supporters. Its latest attempt was the IT raids last week on Anurag Kashyap and Taapsee Pannu, both of whom have supported the farmers’ struggle.

On March 10, a no-confidence motion was moved by Congress MLAs against the Khattar-led BJP-JJP state government of Haryana. Although it was defeated, as per the SKM call tens of thousands of farmers in Haryana picketed the houses of BJP and JJP MLAs, demanding that they support the motion.

From March 12-15, SKM teams went to West Bengal and Assam, held rallies and press conferences and appealed to farmers and the people to defeat the BJP in those states. The SKM also released a similar strong appeal to all farmers and people of the election-going states to defeat the BJP and its allies.

Last week, the Meghalaya Governor Satya Pal Malik came out openly in support of the farmers’ struggle. He said, “Farmers should not go back empty-handed from Delhi. During my last visit I met both the Prime Minister and the Home Minister and requested them not to use force against farmers. Don’t fiddle with farmers…First they would not go back and even if they returned, they would not forget the insult for 300 years.” 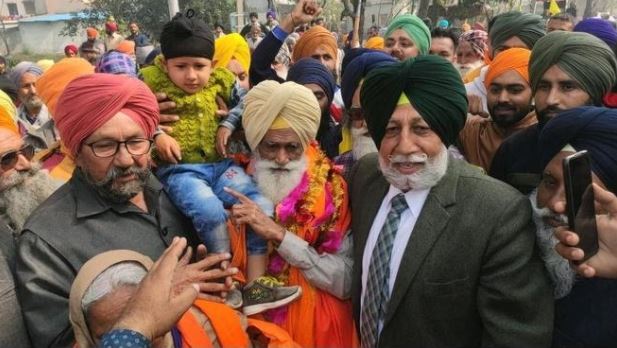