The Peasants Movement Constitutes a Major Crisis for Corporate Capital

The corporate capital has launched a final assault in its desparate bid to extricate itself from the worst crisis it has encountered.

Having swallowed industry, trade and finance, it has now turned its greedy eyes on land and peasantry, along with peoples’ assets in the public sector including public infrastructure and services in health, education and social welfare.

Most importantly, it has its gaze fixed on fertile tropical and subtropical land and its globally unique productive potential.

Remember, the assault is not entirely new: Indian Peasantry was the first victim of its erstwhile ‘Awataar’ in the colonial phase which started in the 18th century. History is threatening to repeat itself with vengeance.

The Welfare State established after the end of colonial subjugation provided new opportunities to the peasantry. New technology and critically supportive state intervention led to national food sufficiency and a vast change in the material condition of peasantry. The change was not equal for different segments of peasantry. Nor was it universal in terms of geographical coverage. Nevertheless, it held a promise of well being for the peasantry as a whole. It is this promise, this possibility which is now sought to be extinguished.

The immediate threat is embodied in the three new farm laws which seek to destroy the relatively well-off pockets of the peasant economy in Punjab Haryana, Western U.P. and Rajasthan, and open the agro-rural economy for unrestrained operations of the corporate capital. More important, those in power are and have been unwilling to make MSP, the economic linchpin of the agrarian transformation, universally and legally applicable. This only lays bare the concerted strategy underlying the attack on peasantry launched by governments in collusion with corporate capital.

The peasant movement started in the areas directly threatened by the attack. It is organised and led by peasantry from within its own ranks. It has attracted the increasing support of the peasantry, irrespective of internal differentiation or geographical distance and differences. It has steered clear of red herrings of caste and communal divisions. It has successfully withstood the concerted efforts by the ruling establishment to malign it with false slogans of nationalism. Above all, it has apparently succeeded in evolving a new political identity of ‘Kisan’ transcending the traditional baggage of caste, religion and region.

The peasant movement has shown political wisdom in keeping political parties at a safe distance and yet increasingly politicising itself strategically. It has appealed for cooperation to the working class, the youth, the unemployed and petty traditional traders and middlemen who are bound to bear the brunt of the assault launched by corporate capital.

Yet, there are faultlines against which the movement must guard itself carefully.

The internal contradiction between the big farmers, on the one hand, and the small and marginal farmers and landless labour, on the other, is one such obvious faultline. The movement has maintained its solidarity so far despite the government’s crude and disingenuous attempts to sow seeds of dissension.

At present, the existential threat to the collective economic well-being has brought all the peasantry together. The resources of the big farmers and the numerical strength of the rest have mutually complemented the strength of the movement. Traditional social institutions of collective endeavour and mutual support such as the Sikh Gurudwaras and Langars in Punjab, Delhi and Haryana; Khap Panchayats in UP, Haryana and Rajasthan; and Kisan Mahapanchayats everywhere have contributed handsomely to sustain the solidarity and momentum of the movement.

However, to sustain this solidarity in the long run, other initiatives would be necessary.

Reorganisation of the rural-agricultural economy on cooperative lines will be the most important such initiative. That will make small and marginal farms viable economic entities. Moreover, the cooperatives will have to take on input procurement and output processing activities.

Surplus labour released by the cooperative reorganisation of farming and the landless labour would need to be organised in labour collectives, who would be engaged in backward and forward linkages of agricultural economy as well as in building social service infrastructure and services like education, health and social security.

All this will need the state’s support. The political strength of the peasant solidarity should be able to extract such support even from the unwilling state.

The other such faultline arises from environmental concerns. The green revolution has brought in its train excessive use of water and the intensive application of inorganic fertilisers and chemical pesticides. It has affected the soil adversely. It has generated ecologically undesirable monoculture.

The peasantry is not unaware of these consequences. However, the situation calls for a long term collective vision and endeavour yoked to an alternative environment-friendly reorganisation of farming and rural economy. An effective initiative will have to come from the government in the shape of a scientific and pro-people land and water use policy; a moratorium on transfer of agricultural land to the corporates; greater resort to organic agriculture; greater diversification; and greater investment in research and development in innovative technologies which reduce dependence on chemical inputs and excessive use of water and yet make handsome contribution to productivity, as in the example of Cuba.

The third faultline is the international obligations arising from WTO discipline on agricultural production and trade. The government will use these obligations as the final, clinching argument to push its so-called ‘reform agenda’.

The present WTO regime has tied Indian agriculture to a global market dominated by big agribusiness. It is irrational, unjust and imperialist. The agriculture in developed countries is structurally and qualitatively different. There, the contribution of agriculture to the GDP is in a single digit percentage. So is the percentage of the workforce dependent on agriculture. That is in vast contrast to ours where the former is around 15 percent and the latter as high as over 50 percent.

Moreover, the vast population with poor incomes and low nutrition makes it incumbent on the government not to risk dependence on the import of foodgrains, and provide food security with adequate indigenous food production and large foodstocks in the public sector to ensure supplies at reasonable price to the vast, vulnerable population.

Furthermore, social and economic stability demands that unplanned displacement of large workforce now dependent on agriculture and related activities be not allowed on account of the globalisation of agriculture production and trade, and consequent transmission of trade signals emanating from the notoriously volatile global market in agricultural commodities.

The history of GATT and protracted negotiations between USA and EEC (European Economic Community, predecessor of the EU) on the issue of agricultural production and trade that preceded the coming into being of the WTO are ample proof of the specificity and importance of this issue.

These powerful entities succeeded in ensuring their respective twin objectives of protecting in perpetuity their regimes of support to agriculture and, at the same time, opening up the markets of the developing countries for exports of their subsidised agricultural products. In sharp contrast, developing countries are still struggling to secure a regime of minimum safeguards against import surges and to maintain minimal foodstocks at the cost of public exchequer.

These minimal demands have been under negotiations for the last two decades, with no results to show yet.

What is needed is a bold and concerted effort with other similarly placed developing countries to ensure recognition of the unique status of agriculture in economies like ours, and to secure a special dispensation allowing a much greater degree of autonomy in national policymaking.

The considerations that led to a permanent waiver to the USA and the continuation of CAP (Common Agriculture Policy) in the EEC under the erstwhile GATT regime, and the generous exemption guaranteed to both USA and EU in the current regime of WTO under the cover of ‘Green and Blue boxes’ of subsidies, were far less compelling than the critical considerations of food security, and the need to prevent unplanned destabilisation of the huge agricultural workforce in a country like ours. We have a strong rationale to press our demand for a much larger autonomy in regard to agricultural production and trade.

Now is the time to press this demand in the WTO. A WTO ministerial level meeting is scheduled to take place in November 2021. Reportedly, there is considerable support already to the move initiated by India and China to press for favourable decisions on the two modest demands long pending before the WTO. India should secure enhancement of the scope of the agenda to claim a much wider degree of autonomy in regard to the national policies of developing countries on agricultural production and trade.

The time is opportune to make such a move. Recessionary conditions that prevail globally, the recent global experience of disruption of supply chains, widespread concern about increasing hunger and malnutrition in the wake of the pandemic and the pronounced tendency to ensure national self-sufficiency in food – all provide favourable conditions to press such an agenda.

Last but not least, the WTO is currently in its weakest position as an institution in its history of 25 years, thanks to its sidetracking by rampant regional and global initiatives such as free trade areas and economic and trade cooperation arrangements, and the virtual abandoning by the USA of its role as chief mentor of the multilateral system.

What is expected of the government today is not supine submission to the dictates of WTO and quoting our obligations in the WTO as an argument to push its ulterior agenda of the so-called ‘farm reforms’. On the contrary. Government is expected to assert in WTO the legitimate demand for a greater degree of autonomy to pursue appropriate national policies in regard to agriculture.

In sum, in order to sustain the solidarity of the peasant movement and accelerate the momentum it has generated, a series of innovative initiatives are called for:

It is time to initiate an alternative plan of reorganising the agro-rural economy based on a scientific and pro-people land and water use policy; introduce a moratorium on the transfer of agricultural land to the corporates; introduce joint farming cooperatives of small and marginal farmers; form labour collectives of surplus labour to undertake the building of rural infrastructure and social services, and also to engage in cooperative enterprises meant for organising the forward and backward economic linkages of agriculture; innovative technologies which will internalise environmental concerns and yet maintain increasing productivity; regional planning based on commodity balances to strengthen the operations of the web of cooperatives expected to run the rural-agricultural economy in expanding a harmonious network; capitalising stocks of wage goods through local labour intensive development projects; local cooperatives taking on the procuring, stocking and distribution of foodgrains; linking foodgrain procurement with universal PDS; a larger role for the public/ cooperative sector in internal and international trade; and obtaining a greater degree of autonomy in WTO discipline on agricultural production and trade.

The peasant movement has proved its grit, its innovativeness and its truly national character. It will be only natural to expect that it launch comprehensive initiatives not only to protect itself from the immediate threat it is facing in regard to its land, its livelihood and its identity but also to lay the foundation of a new economy based on mutual cooperation, peoples’ solidarity and sustainable development. 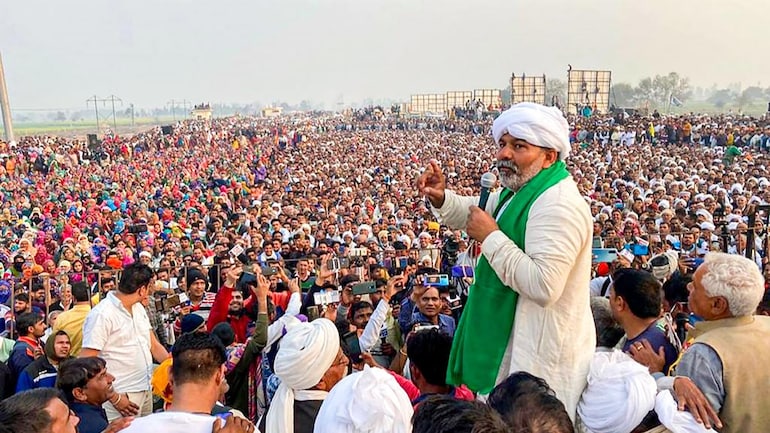