On his return from Dhaka, where he’d be immersed in Bangladeshi goodwill that comes from the flowering of very good relations with an adjoining fellow-South Asian country, Modiji should contemplate the equally good returns that are there for his taking if only he shakes the hand of friendship proffered by the main man in Pakistan, army chief, General Qamar Javed Bajwa. And ends, once and for all, the intra-mural and squably India-Pakistan relationship — an ongoing absurdity.

Just how absurd is reflected in the fact of two Punjabi Jats, a Bajwa leading the Pakistan Army, and a Sidhu (Air Chief Marshal Zaheer Ahmad Babar) the Pakistan Air Force! While not rare, it is uncommon, in Pakistan for Punjabis converted to Islam however long ago, or recently, to retain their original family names. That the families of the current Pakistani COAS and CAS have managed to do that suggests the resilience of old social identities even under pressure to conform to newer realities.

And should someone care to dig deep enough these two broods would, I reckon, find their Sikh cousins across the border. [Could the General, I wonder, be related to my best friend from school days, Harjit Singh Bajwa, a brilliant engineer officer who, but for brain cancer cutting him down in his prime, would almost certainly have made it as one of the youngest to reach Rear Admiral rank in the Indian Navy?]

Cousins of different faiths living side-by-side was not uncommon in old India. My late mother-in-law originally from West Punjab — a ‘Malik’ and native of Miani, Sargodha District, was fond of recalling from her childhood days the ‘Malika-da-darwaza’ (Gate of the Maliks) beyond which lived the community of Maliks — Hindu families on one side of the mohalla street, Muslim Maliks, on the other side, with children running in an out of homes on either side and adults doing the normal to-ing and fro-ing while preserving prejudices and practising their respective religious restrictions!

Thus, it was quite normal during each other’s festivals for the Hindu and Muslim Maliks — keeping in mind mutual sensibilities –to exchange gifts of food in the raw form — wheat, rice, vegetables, dry fruit, etc., to allow the usually same dishes to be cooked and eaten according to different norms. She remembered Hindu Maliks having a separate set of crockery for when their Muslim relatives visited them!! This may seem ridiculous, but that was the way it was.

Such snatches of sentiment cannot, however, figure, other than tertiarily, in the calculation of national interest, in which respect, the India-Pakistan tangle is an especially hard nut to crack. Still, as I have argued in my books and other writings, the recovery, even if in a loose form, of the unitary subcontinental space for longterm strategic stability and economic progress is an inescapable geopolitical imperative, whatever the naysayers among the religious right, the military and strategic enclaves, and the media commentariart, on either side may say.

Except, Gen. Bajwa has indicated his willingness to take the Pakistan army out of the nyet camp and give peace a chance! In his March 17 address on the second day of the first ever International Security Conference in Islamabad — which the Pakistani policy establishment hopes to see emerge as counterpart forum to the Raisina Dialogues in Delhi, made a straight forward pitch for peace and why India and Pakistan need to go beyond the mindless hostility their relations are mired in.

But what did Bajwa say? And why shouldn’t what he — at the apex of the singularly powerful army and central pillar of the Pakistani state, said be taken seriously as it needs to be? The good thing is that the Modi government has eased up on its relentless demonizing of Pakistan, a process begun with the UAE, as mediator, urging the two sides to talk out the differences.

Modi visited Dubai and was feted, and I had written then that the special consideration shown him — permission to build a temple, promise of investment in India, etc. — were a means for the Emirates to develop leverage, and which lever was now used. The Directors-General, Military Operations, of both sides talked in late February and agreed strictly to keep the peace on the LoC, and Modi then made conciliatory moves (Covid vaccine, etc). This was the appetizer.

Then Bajwa followed up with the first course — his speech, the text of which is available at https://www.dawn.com/news/1613207/read-full-text-of-gen-bajwas-speech-at-the-islamabad-security-dialogue?preview . Other than stock items — importance of peace, prosperity through extended regional connectivity, etc he made four really significant points that do, in fact, advance the process of rapprochement.

One, while deeming the resolution of the Kashmir dispute as central to peace in South Asia, and asking Delhi to “create conducive environment” in J&K he, unlike Prime Minister Imran Khan, made no mention of the restoration of Article 370 and the status quo ante as pre-condition.

This leaves the field clear to revive General Parvez Musharraf’s scheme that Prime Minister Manmohan Singh almost accepted in 2007 as template for an amicable agreement. It will, in effect, freeze the existing territorial division of the erstwhile princely state of Jammy & Kashmir, with the fig leaf of a joint mechanism to oversee Kashmir affairs put in place.

It will be a salve for Pakistan’s amor propre but not change the reality on the ground in that while Kashmiris on either side will be free to travel to the other side, they will require their identity papers to be stamped/registered at the border posts thereby reinforcing the territorial separation and sovereignty principle.

Pakistan benefits because it gets to keep, besides Pakistan-occupied Kashmir across the Neelam River, the “Northern Areas” — Gilgit, Hunza, and Baltistan, now crucial to CPEC, and India retains Jammu, the Valley, Ladakh and the Saltoro Ridge. There’s was no talk of “self-determination”, perhaps, because a referendum in Baltistan could see the shia majority opting for India!

The chief positive of this Musharraf scheme is that the Pakistan army is fully on board, which fact, minimizes the value of such opposition to this compromise as may be voiced elsewhere in the Pakistani society

Two, Bajwa extolled “rule-based” order, one that, he said, may help India and Pakistan to escape “the acrimony and toxicity of the past”. Because the rule-based order mechanism most agitating Pakistan is the UN FATF (Financial Assistance Task Force), which tracks money flows to terrorist organizations and outfits — a great many of whom are located in Pakistan.

That country has been on the FATF Grey List for a long time and barely avoided being heaved into the Black List which would have automatically triggered killer economic sanctions — the one thing Pakistan simply cannot afford to have happen. True, Pakistan has been protected by the US and the West, but should Islamabad fail to end its financial and other support to the terrorist gangs masquerading as social welfare organizations, its protectors may feel compelled to bring down the boom. That could write finis to Pakistan’s trade and attempts at economic development.

A shrinking economy will mean a bigger slice of a progressively smaller economic pie for the Pak military, or a smaller slice of a flatlining economy — in either case, the Pakistan army takes a hit. What this means is that the Pakistan army will err on the side of extreme caution before depolying terror — an asymmetric means of warfare it has had considerable success with against India in Jammu & Kashmir. In other words, Pak-sponsored terrorist incidents may no more be on the Pakistan army’s menu. At least for the nonce.

Three, Bajwa said that Pakistan intended to leverage its geostrategic location to become “a bridge between civilisations and connecting conduit between the regional economies.” Note, he thus implicitly acknowledged India’s standing as a civilizational state, along with China, and how he expected Pakistan to be the medium, a way station, for transactions of all kinds between “West Asia” and “East Asia”.

And finally, and most importantly, the General stated that “despite the rising security challenges” Pakistan was not involved in an arms race and its “defence expenditures have rather reduced instead of increasing”.

It is an indication that GHQ, Rawalpindi, now believes that Pakistan (1) has conventional and nuclear capability sufficient for any contingency featuring India, and (2) does not need to react to India’s military build-up against China, even though some of these new dual mode capabilities can be switched to the Pakistan front.

In other words, the Pakistan army has reached satiation in terms of the national expenditure directed to service the military’s needs.

Incidentally, the basic point underlying Bajwa’s offer of peace is the fact that the Pakistan army no more considers India potent, primary, national threat. Relying on China to back it materially in an unexpected crisis with India, GHQ, Rawalpindi is more sanguine and at peace with itself than ever before in terms of dealing with India.

But Bajwa’s predecessors — Generals Raheel Sharif and Ashfaq Kayani had repeatedly declared to the media that the danger to Pakistan was not anymore from India but from terrorists operating inside the country. That this was not iterated by Bajwa suggests the Pak army thinks it is beginning to get the better of such unfriendly outfits as Tehreek-e-Taliban Pakistan, and the Baloch freedom fighters roiling the internal security situation within the country.

This from Pakistan’s point of view is a great improvement.

But to revert to Bajwa’s desire for amity, the main course in the rapprochement process will ultimately be the deal hammered out by the diplomats. A lot of the negotiating work has already been done, and the MEA and the Pakistan Foreign Office need only dust off the notes, memoranda and files from 2007.

The dessert would be Modi and Imran meeting, ideally, on the occasion of the first match, in Delhi or Lahore, in a resumed cricket series when the entire subcontinent would have tuned in, signing the peace accord, then proceeding to the stadium for a little “chai pe charcha” as the ball is bruited about. Thereafter, the two leaders can repair to their respective corners to await the announcement of the shared Nobel Prize for Peace which last (per this script), is certain! 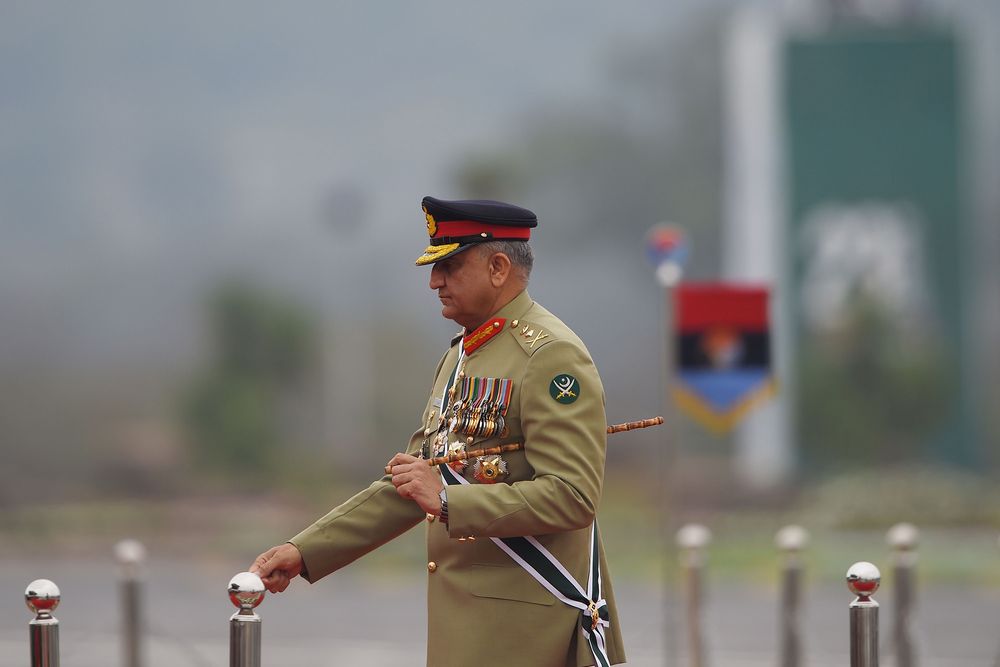