When a Diplomat Speaks

The art of diplomacy

Before I joined the government I thought “debriefing “ was something you indulged in with a lady on a lonely beach, a-la James Bond in DR. NO. It was much later that I discovered that this unhappily phrased word is a standard bureaucratic technique, whereby the incoming babu pumps the outgoing one for as much inside information as possible without giving away anything in return ( not that the departing babu is eager to impart any meaningful information either- after all, information is power these days).

It requires great skill, particularly in the Ministry Of External Affairs, where esoteric words like “ non-paper” and “demarche” and "note verbale" create an impenetrable wall of meaningless drivel for the uninitiated outsider.

The Word was invented to convey meaning, but in the world of diplomacy it is used to conceal any meaning whatsoever. I once asked a senior American diplomat what exactly was meant by the phrase "free and wide ranging discussions" between heads of state. He answered with a smile: " Oh that; it means that there was blood and gore all over the floor!" As Will Durant observed: To say nothing, especially when speaking, is half the art of diplomacy.

For, as I discovered for myself, the real secret about diplomats is that they are trained to say something when there is nothing to say, and to say nothing when there is something to say. Extracting any meaningful information out of a diplomat is like trying to squeeze a peg of single malt out of Mr. Nitish Kumar. ( In fact, given that any information is anathema to the present government, Mr. Modi should seriously consider appointing diplomats as Information Commissioners).

In the year of our misguided Lord VP Singh,1990, I was posted as Special Assistant to Mr. IK Gujral who was then the External Affairs Minister. I approached the assignment with some trepidation and a lot of caution because one had heard about the gobbledygook that passes for language in the world of diplomacy. I was told that a successful diplomat is conversant with many languages, the most important being double-talk, and that he thinks twice before saying nothing. Even their wives rarely know whether they are coming or going.

I soon entered a rarefied universe of bilateral relations, detente, consular access and summits. It was a world where vacations were taken in Biarritz or Macao, not Goa or Manali; where diplomatic immunity is of greater consequence than Covid immunity; where it needs many hours of intense brainstorming to decide whether our Foreign Minister should smile at his Pakistani counterpart or frown at him.

Meticulous as he was, Mr. Gujral instructed me to obtain an exhaustive briefing from every Divisional Joint Secretary so that when their files started arriving in the Minister's office they would make more sense than the Dead Sea Scrolls, which are as nursery rhymes compared to the cabbalistic code which passes for notings in MEA files.

Now, Joint Secretaries in the MEA are designated like latter day potentates- JS ( Americas), JS ( Western Europe), JS (Africa) and so on, as if they had carved out the globe amongst themselves, in the manner of the British, the Dutch and the Spanish in the good old colonial era. (Actually, they have, and woe betide any mandarin from any other Ministry who dares to trespass on their turf without the potentate’s say so !).

Working my way through Western Europe, Eastern Europe and Africa I finally arrived in the room of South Asia, a slightly portly Bengali gentleman, clearly weighed down by the problems of his intractable empire. It was a post lunch session, and I got the distinct impression that he had secreted a "rossogolla” in his mouth. " What," I asked him astutely, " is our geo- political strategy in our neighbourhood ?"

" Our long term plan," South Asia announced, " is to make the Indian Ocean a zone of piss."

That, I felt, was certainly a lot of piss. Moreover, since this was a couple of decades before Messers Ajit Pawar and Gadkari made piss the fulcrum of all rural development programmes, I was non-plussed. " You can't be serious, " I protested, "surely Sri Lanka and the Maldives wouldn't allow this !"

" They approve of our plan- after all they too are pissful nations."

" What about China?" I countered, drawing on my limited knowledge of geography.

He was ready for that left hook. " Ah! With China we have a different problem- it’s about a shit. They won't give us a shit!"

I wanted to remind him that China had indeed given us a lot of shit in 1962, some of which still stuck, but I let that pass. " Why would we want China to give us a shit ?" I ventured, " don't we already have enough of our own?"

South Asia finally pulled the flush on this inquisitive IAS Special Assistant. Triumphantly, he squared the circle and , cheeks still bulging with that infernal sweetmeat, proclaimed: " There can be no piss in South Asia until China gives us a shit in the Security Council."

I quietly left. This was one conversation I did not share with Mr. Gujral. And now we know why both peace in the Indian ocean and a seat in the UN Security Council has been eluding us all this time, and why no Indian Prime Minister has ever received the Nobel Piss Prize. All because of a rossogolla in a Joint Secretary’s mouth, perhaps ? 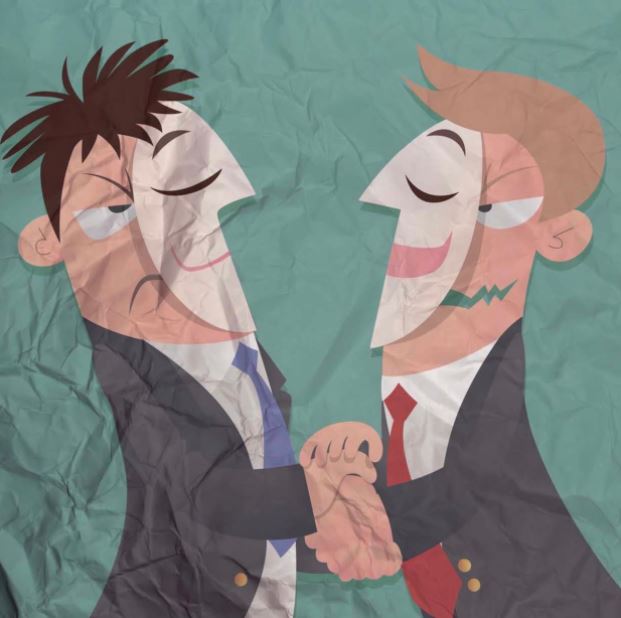