Mamata Banerjee is the only woman Chief Minister in the country. And really the only woman who qualifies as a leader of a political party, giving it shape and direction. Whether you love or not, she is a factor to be reckoned with as the high voltage campaign against her in these Assembly elections demonstrates. She is the focut of every political party in the fray--from the Left to the Congress to the Bharatiya Janata Party who have been targeting the woman who has captured power on her own steam, and without the help of godfathers or magical Dynasties.

Banerjee is not a particularly likeable character for those on the other side of the fence. Her world is black and white, where foes are foes at day and night as she clearly does not believe in switching the frowns of dislike into false smiles over social gatherings. Her politics has been off the street, and in recognition of her own intellectual shortcomings she has brought in a core to advise and help and plan. She came into West Bengal, arms and fists swinging to carve a space for herself in what was never a peaceful political field. She succeeded, and then when more comfortable tried to reach out to others to forge a larger front. The others included even the Left that of course, has been barely able to contain its dislike for the chief minister holding her responsible for its virtual decimation in the state.

Today Banerjee who has lost many of her men to the lure of the BJP is fighting a battle against not just the might of money but of power, threats and intimidation. Observers, even those opposed to Banerjee, admit that this is unprecedented with all efforts being made by her main opponent in the state, the BJP, to turn the election communal. Banerjee has been resisting the effort but the going has been very tough given the fact that the canards against her are finding an echo in the campaign of the secular parties who should have been on the same side of the fence. By all accounts Banerjee --indomitable though and a fighter to the last---is finding the going tough, with the attack ruthless and very ugly.

However, what has stood for her ---sometimes to the point of ridicule---is her spirit that refuses to let her back off. And it was this spirit that made her declare her election from Nandigram, where she led a rally in her wheelchair after sustaining injuries because of over-mobbing earlier. Hers has been a highly political campaign, and while her demerits shine through media columns on a daily basis it is strange that her sheer grit does not make it to the headlines. It is not easy being a woman in politics, and impossible really to lead a political party, fight an election and withstand the array of forces determined to drag her down. And given the number of male politicians who have succumbed to pressure, Banerjee stands out like a beacon in their midst.

Banerjee has come a long way from being just part of the shouting brigade of former Prime Minister Rajiv Gandhi in the Lok Sabha. Her high pitched screaming in the house cannot be forgotten by those who heard her and very few then would have predicted her phenomenal rise to power, where she did not just establish a political party, but fought the Left in its own den, won and became the Chief Minister of the difficult state of West Bengal. She has remained popular despite all the odds, and never allowed the corridors of power to replace her street politics, a factor seemingly recognised by her state.

Even as Nandigram goes to vote in the second phase of polling Banerjee has written to ten key opposition leaders to come together, evolve a strategy, and work to defeat the BJP in the next general elections. The seven point letter is being dismissed by controlled sections of the media, predictably as political tactics for her own Assembly election, but it is consistent with her larger efforts of national opposition unity for a while now. And if her party wins these polls, will acquire more teeth rapidly.

In the strongly worded letter Banerjee has listed seven instances of what she describes as BJP’s assault on democracy. And stated much of what should be obvious to the opposition parties but does not seem to be. What is interesting is the choice of the ten leaders she has written to to forge this broad unity. She has left out the CPI(M) and CPI) and included the CPI-ML. Sonia Gandhi and the Congress party are included in the list.As are the chief ministers of Maharashtra, Telangana, Delhi ,Odisha and the main opposition parties of Tamil Nadu, Uttar Pradesh and Bihar.

It is a broad reach out with big potential. Mamata Banerjee also has the potential of being at the help of this broad unity if she wins the elections in West Bengal. Given the fight, a victory will crown her as the queen and catapult her to central politics regardless. The letter demonstrates this interest, and is a clear preparation on the ground of what could follow.Except for the two communist parties Banerjee’s relations with all the others she has written to is good and sound at a personal level as well.

Clearly she has thrown the gauntlet, and given her personality might also be the first to pick it up. 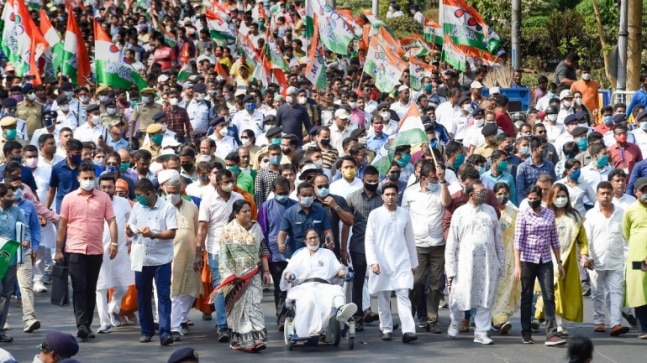