Consequences and options for India and the region

The Americans have thrown in the towel; its military will soon slink out of Afghanistan.

US President Joe Biden, over-riding Pentagon’s objections, announced the evening before the pull-out of all American troops from the “endless” Afghan war by September 11 because, he explained, “We cannot continue the cycle of extending or expanding our military presence in Afghanistan hoping to create the ideal conditions for our withdrawal, expecting a different result.”

This is how the punitive US intervention to avenge the 9/11 attacks on the twin Trade Towers in New York closes, as ignobly as America’s cutting and running from Syria, Iraq and still earlier from Vietnam.

And no amount of dressing up this fact by Secretary of State Anthony Blinken in his sudden dash to Kabul — “the partnership is changing…[it] is enduring” — will hide the truth of a beaten America and its military hightailing it out of Afghanistan.

It proves once again that the US does not have the staying power to prosecute long wars, that once engaged, the mounting deaths of American soldiers (some 2,500 to-date) and escalating costs (well in excess of $ 1.2 trillion over 20 years) of fighting a difficult war in distant battlefield begin taking their toll.

All it needs is a highly motivated and resilient foe, strong of will even if minimally armed — as are the Afghan Taliban and earlier as were the Viet Cong, to slowly suck the spirit out of the armed intruders. And notwithstanding the ultra-advanced weaponry and battlefield support systems of the US expeditionary military in Afghanistan, the US forces — Washington lately realized — simply don’t have it in them to defeat the Afghan Taliban.

Hence, Biden’s scoot option.So much for the reliability in crisis of the US as partner and ally! This is a warning to Asian states and to Prime Minister Modi, NSA Ajit Doval, S Jaishankar and his crowd in MEA and the Indian military brass seeking solidification of the American connection.

However, it was the leader of the opposition, Republican senator Mitch McConnell who accurately described the situation in Afghanistan post-Biden’s decision. “We’re to help our [Taliban] adversaries ring in the anniversary of the 9/11 attacks”, he said, “by gift wrapping the country, and handing it right back to them.”

It is likely the Taliban will assume the reins of government in Kabul. But it is also a possibility that such a denouement may not obtain anytime soon for several reasons.

The Uzbek group controlling northern Afghanistan under the warlord, Colonel Abdul Rashid Dostum, with a private army of some 40,000 Uzbeks, has never liked the Taliban and will not accept their writ. Also the area that was once the foremost Afghan guerilla leader the late Ahmed Shah Massoud’s home ground — the Panjsher Valley — is where the ethnic Tajik Afghans reside and where the Taliban don’t hold sway.

Both the Uzbek and Tajik ethnic provinces of Afghanistan, on the other hand, support the present regime of President Ashraf Ghani — Delhi’s longtime partner. Then there are the shifting interests of four other players in the Afghan mix — Pakistan, Russia, China, Iran and India.

From the time of the Soviet occupation, Pakistan was the US umbilical that materially sustained the Afghan mujahideen fighting the Russians; which mujahideen of Pashtun stock then signed on with the Taliban led by the one-eyed Mullah Omar, until it was forcefully overthrown by the US. Thereupon the Taliban returned to what they were best at doing — waging an asymmetric war, now against the American military in the new millennium.

The problem for Pakistan is that the backwash from this episode led to the “Kalashnikov culture” with attendant availability of small arms and ammo seeped into Pakistani Punjab and into tribal areas in Waziristan, etc recently “pacified” by the army.

The Tehreek-i-Taliban Pakistan (TTP) emerged from these elements and has attained a certain critical mass, with its influence spreading farther and deeper in the countryside.

TTP’s activity has paralleled the rapid growth of the even more reactionary Islamist group — the Tehreek-i-Labaik Pakistan (TLP), which the Imran Khan government outlawed April 13 — perhaps at Pakistan Army’s prompting. This after the Imran dispensation had conceded many TLP demands, including one that won’t be realized — cessation of diplomatic relations with France for its anti-Muslim measures (banning hijab, etc.).

The ban on this outfit resulted in its cadres assaulting leaders, organizing ‘chakka jams’ and shutting down most cities a day later (April 14). But the larger official intent was to prevent TLP from undertaking its threatened Long March on Islamabad to impose targeted mass pressure on the government to meet still more problematic demands.

As usually happens in such circumstances, the tendency will be for outlier, ideologically disparate, outfits such as TTP and TLP arrayed against the Pakistani state, to forge tactical and logistics links to assist each other in realizing their slightly different agendas.

Then there are fellow travellers in this extremist-Islamic bloc in Pakistan, such as Lashkar-E-Taiba/Pasban-E-Ahle Hadis and Jaish-E-Mohammed/Tahrik-E-Furqan, which are militant on the Kashmir issue and on the frontlines of the anti-India front, but are being held back by Islamabad which does not want these groups to precipitate terrorist incidents in J&K that, besides pushing India and Pakistan into another cycle of mutual recrimination and possibly low level hostilities, will once again drag Pakistan to the brink, tipping the country from the ‘Grey List’ into the UN Financial Action Task Force’s ‘Black List’.

This will automatically trigger lethal sanctions and sink Pakistan economically for good. The direction in which this is headed was signalled by the UK government two days back, for the first time, including Pakistan in a list of 16 states identified as assisting terrorists.

To add to this roiling mess are the ongoing activities of freedom fighters in Balochistan and the stirrings of rebellion among the minority shia community who suffer the sharp end of sunni hate, and have had enough.

This especially involves the Hazaras constituting the majority in Gilgit, Hunza and Baltistan, where public protests against Pakistan’s sunni excesses have mobilized the local people, and which condition the Imran government and the Pakistan army are in mortal dread of.

Russia intiated its own forum to achieve peace in Pakistan, the one that left out India. Moscow’s interest is in seeing that Taliban form the government in Kabul, because of the belief that this is the only way to contain and limit this menace to Afghanistan. Russians have always feared that should the US military remain in Afghanistan, some of the Taliban fighters who are driven out will begin reaching the Caucasus region and once there will radicalize Russia’s southern tier.

China too sides with Russia in that it too is afraid of the Taliban influencing the restive Uyghur population of Xinjiang. Beijing rather trusts Pakistan to continue to manipulate the Taliban factions and to tamp down on this danger. The strategic interests of Iran, on the other hand, in several aspects, overlaps India’s interests and those of the Ghani government, and of the Uzbek and Tajik groups — in that Tehran doesn’t want an extremist sunni regime ensconced in Kabul and, if it is somehow installed, then Iran will be inclined to do whatever is necessary to undermine it.

This makes for a shared Indo-Iranian interest and for Delhi to begin preparing at a minimuman an arms pipeline, as in the past, to these opposition groups.

That leaves India with a menu of options — not all of them clearcut or without risk.

Depending on whether the secret UAE-facilitated back-channel diplomacy with Pakistan delivers a modicum of peace, meaning that Islamabad conveys it is reconciled to the Constitutional change of status for Kashmir, etc., Delhi can callibrate its moral and material support for the Ghani government, strengthen its old links to the Tajik and Uzbek factions, provide such covert help to TTP and Baloch fighters as furthers India’s national interest, and cooperate with Tehran in propping up the Ghani government for as long as it lasts, and then to upkeep an all-effort insurgency against the Taliban faction that assumes control in Kabul.

In this context CDS General Bipin Rawat’s worrying yesterday about the US-NATO withdrawal from Afghanistan creating “a vacuum” hints at the Indian government’s diffidence in dealing with an unfolding situation where India has lost none of its cards. This view is in contrast to his counterpart Pakistan COAS General QJ Bajwa’s “welcoming” the US military pullout.

Whatever the Modi regime thinks is lost with the US militarily out of the picture, Washington, Beijing, Moscow and Islamabad need to be made to appreciate that India — if it plays its cards right and that’s a big if considering Delhi increasingly takes its cues from Washington — has the power to be, if not the decisive actor, then a spoiler in any political arrangement in Afghanistan that doesn’t take India’s interests fully into account.

Bharat Karnad is an emeritus professor in National Security Studies at the Centre for Policy Research, Delhi and a national security expert. 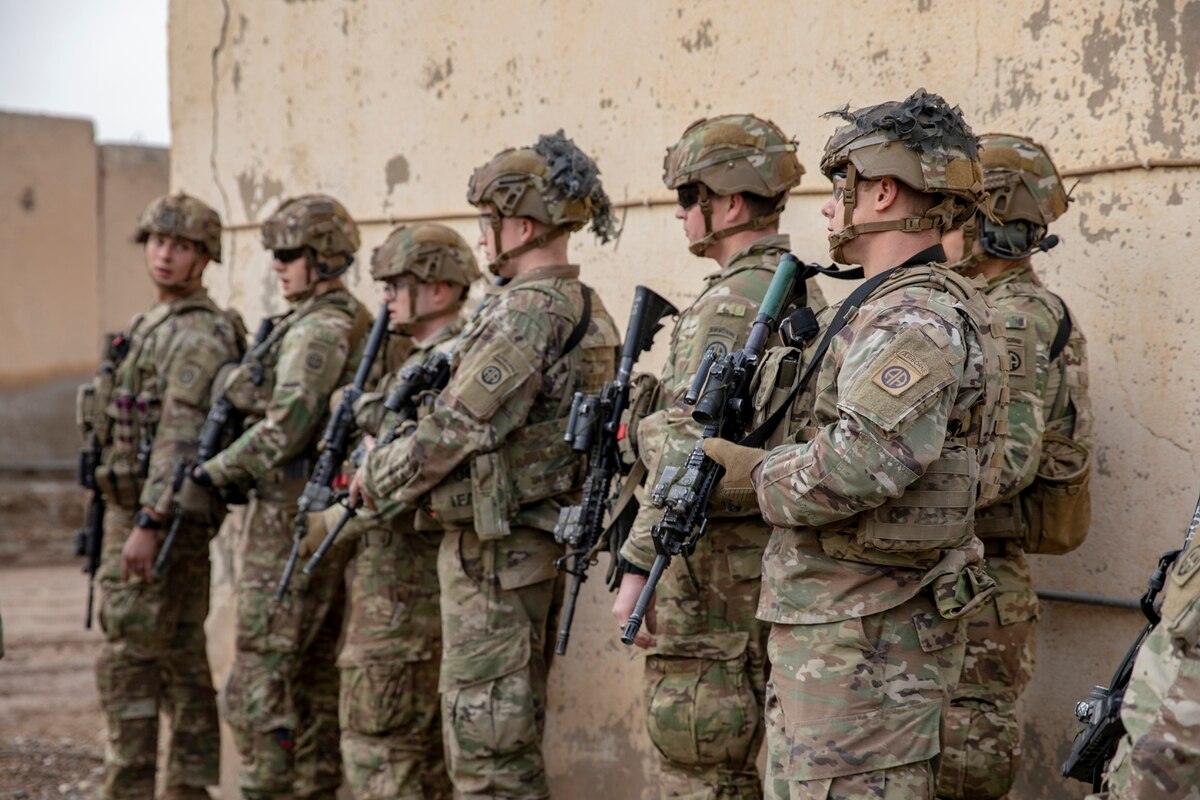