‘We Can’t Breathe’ Is No Way to Die

Oxygen continues to be in short supply with Delhi hospitals asking admitted patients to leave, according to media reports. The larger Delhi hospitals have been reporting critical levels of this life saving treatment for Covid positive patients, but the smaller hospitals that have reached breaking point are now panicking. Not only are patients being turned away but those who have managed to get beds are being asked to leave while they still could, for other hospitals if possible.

Doctors have been on television, one from Mumbai in tears as she could not save lives because of the absence of oxygen and medicines. Another from Delhi who told the Times of India, “we are supposed to save lives, if we cannot even give oxygen our patients will die.” The doctors and health workers are working around the clock, falling sick and requiring hospitalisation, to save lives without the basic essentials. Many are trying to keep patients at home as long as possible with continuous online consultations, with even the essential drugs running out now.

Reports from other states suggest much worse, particularly in the north where Covid deaths are being written off as ‘cardiac arrest’, ‘old age’, and ‘multi organ failure’ in a bid to influence the spiralling statistics. The foreign media, including The Economist, has pulled out the plugs to severely castigate the government for its dismal failure in not just containing the crisis, but providing adequate health care for the citizens. Even as the US issues a travel advisory for its citizens disfavouring India, and countries stand banning flights and travel to and from India.

But this is clearly not a matter of concern for the citizens of India at the moment, as they are battling a scourge pretty much on their own. The scenes outside hospitals are heart rending as patients die, or their relatives run from pillar to post in search of medicines, even as doctors announce the hours they have before the oxygen supply runs out. Many doctors have expressed fear for their safety, as often unruly Indians turn against those who are trying to help, just because they are within sight.

Meanwhile the migrant workers have started leaving for their villages fearing a lockdout that will hit the railways like the last time. Pilgrims from the religious melas have started returning to their homes, many reportedly testing positive. Election rallies continue albeit in more restricted numbers, and the number of patients continues to rise even as the oxygen supply falls and hospital beds become unavailable.

The governments are fighting over oxygen, each to his own. The vaccine has been priced differently for the centre, for the states and for private hospitals. Opposition leaders are insisting that the centre is playing favourites. But all said and done it is imperative for the government to open all doors to medical experts and state governments, sit down together and chalk a short and long term strategy, fulfil the shortfalls on a war footing starting now, and bring relief to the citizens of India with concern, empathy and care as the basis for an efficient action plan.’ We cant breathe” is no way to die. 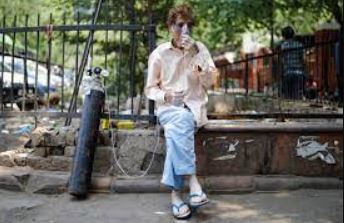