The Auditor At Work!

The oddities of audit.

The difference between a Chartered Accountant and an Auditor is that whereas the former looks for Cash in Hand the latter looks for Hand in Cash. And this precisely is what makes the Auditor the bane of every DDO ( Drawing and Disbursing Officer, poor sod) in the government.

Every once in a while the Audit party descends on government offices like a biblical plague, armed with annual targets of audit paras and a tunnel vision that would do a mole proud. Your typical auditor is adept at looking through key holes, but as all of us who have done our share of peeping through key holes during our college days would testify, this kind of opticism ( to coin a word) suffers from a loss of perspective and context: it may help one to focus on a particular part of the female anatomy but it loses the larger picture.

Audit parties also like to be well looked after and it is acknowledged in government circles that a well turned tandoori chicken is worth at least a dozen “dropped” audit paras. However, if the said avian has flown the coop this is taken stern note of by the mole, and the resultant observations can be quite remarkable.

Sometime in the 1940's a British forester arrived at a remote forest rest house in upper Shimla district at the fag end of a severe winter. He noticed obvious signs of a bear ( the area abounds in Himalayan black bears) which had spent the winter in the deserted rest house and, as the anecdotal and precise British are wont to do, recorded the following in the register: “ It appears that Mr. Bruno has been staying here these winter months as there are signs of his presence all over the verandah and the grounds.”

When the accounts of the rest house were audited the Audit party noted that the Department had been extremely lax in allowing Mr. Bruno to stay in the rest house without paying the room rent, and directed that the rent for the entire winter months be recovered from him, and in future no one should be permitted to stay there without obtaining a permit ! The Himachal Pradesh Forest Department is still looking for the errant Mr. Bruno to settle the para.

On a more recent occasion an Audit party was auditing the accounts of a small Municipal Committee in Chamba district. To lighten its onerous burden it desired that some refreshments be provided ( at the expense of the Committee, of course). Since the lamb which is being led to the slaughter has very few choices, some gulab jamuns were duly served( note that the mandatory chicken was missing). When this particular bill came up for scrutiny Audit pounced on it with a vengeance and demanded to know the reasons for this “wasteful” expenditure.

The Secretary of the MC, however, was equal to the task: he replied that the gulab jamuns had been purchased to feed to stray dogs in order to poison them ( this was before Mrs. Maneka Gandhi discovered her true passion in life).

Now, auditors are a resilient sub-set of homo sapiens and, though initially taken aback by this impertinent reply, they quickly bounced back with this counter punch: “ How many dogs were killed ? Please furnish documentary proof in support thereof.”

The Secretary, an experienced pugilist himself, delivered the TKO with this upper cut: “ No dog appears to have died as it is reported that they have become immune to such gulab jamuns !” Ouch!!

My own favourite anecdote was related to me many years ago by the then Director of the Delhi Zoo. Now, this Zoo has a large number of peacocks and at one point of time their numbers grew to more than what it could handle. The Director, quite sensibly in any one’s opinion but that of Audit, decided to sell the surplus birds. The process involved some minor expenditure which was duly reflected under the heading “ Retailing of peacocks.”

When Audit saw this entry all its members emitted a collective Hallelujah for their tunnel vision had detected the mother of all audit paras. And what a para it was: “ Why was the retailing of peacocks necessary ? What happened to their original tails? Has responsibility been fixed for the loss of the original tails ? Has the quantum of loss been estimated? Were tenders invited for fixing ( retailing) new tails on them? Is the quality of the new tails similar to the original tails?”

The Director sought an immediate transfer, thankful for his narrow escape- he confessed to me that he could not even imagine what would have happened if he had retailed a lion or a tiger !

Acquiring the peculiar mentality of an auditor is no child’s play: it requires years of arcane training at the Yarrows Academy in Shimla and many more years asking probing questions. Rome was not built in a day, nor was Mr. Vinod Rai’s Coal scam report prepared overnight; it was preceded by years of probing questions by him on government functioning: Why were three biscuits served at the meeting when the rules permitted only two ? Why were tenders in newspapers ( costing Rs. 20000/) not published before purchasing pens ( costing Rs. 2000/)? Why was expenditure on flavoured condoms ( for birth control) booked under the Family Planning Programme head and not under Food for Work ?

Indeed, the Auditor is a prime example of reverse evolution and even the Gods do not tangle with him as the following parable indicates:

Two auditors died and arrived at the pearly gates. Just ahead of them were two clergymen but St. Peter motioned them aside and took the auditors into heaven at once. The clergymen protested: “ Why them ahead of us ? Haven’t we done everything possible to spread the word of the Lord?”

“ Yes”, said St. Peter, “ but these two guys have scared the hell out of more people than you ever did !’ 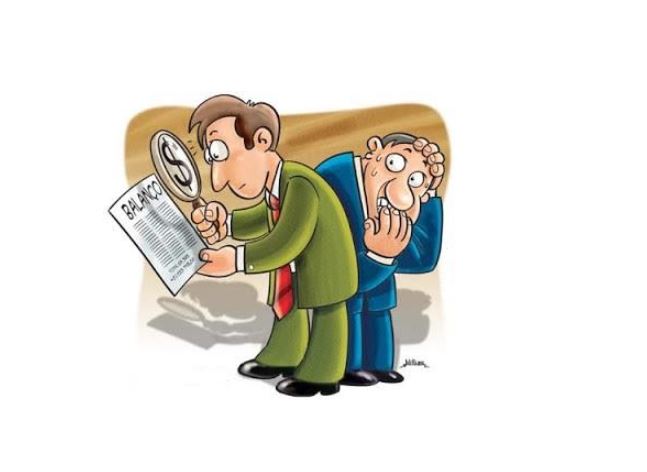