The diminutive chief of the Trinamool Congress party trounced the might, the money power, the sheer strength of the Bharatiya Janata Party that was on display during the elections in West Bengal. Added to this was the partisan coverage of the elections by the usual television channels, who have given up even pretending to play the deck with an even hand.

Mamata Banerjee should be commended for sheer grit and determination as the entire range of the political spectrum --BJP, Congress, Left--- was arrayed against her in the field and seemed more intent to train their guns on the West Bengal Chief Minister than on each other. Several local journalists, more tuned in to the ground, did suggest that she would win the elections but the cacophony drowned their voices.

Prime Minister Narendra Modi led the BJP attack, referring to the CM as Didi Oh Didi in unmistakably disparaging tones. But Mamata Banerjee has had the last laugh, playing her cards well, and clearly speaking a language understood in real terms in West Bengal if not in Delhi. She knows her people and clearly the campaign not just trounced the BJP that has emerged as the main opposition, but the Left and the Congress that seem to have lost whatever little foothold they had in the state.

Banerjee does not have a godfather, is not from a dynasty but a leader in her own right, and has the courage it takes to take on the worst kind of attack on her personally, and her government. Her strategy mastermind Prashant Kishore made an interesting point to NDTV, that polarisation can take elections up to a point but not beyond it in India today. And hence the strategy was for her not to be scared by the BJP hype, and continue with her politics of inclusivity instead of being moved away from the goal post. What he did not say is that the Congress party has allowed itself to be bullied by the BJP in moving towards the right to avoid this charge, and in the process lost ground steadily all over the country. More so in these elections where it has lost again in Assam and Kerala, and remained out of the race completely in West Bengal.

In the midst of the campaign Banerjee sent out a message for larger opposition unity. Some ridiculed it as a sign of fear, but clearly the message was indicative of her post election strategy, win or lose. The results this time are set to bring in the DMK and Stalin into power, retain strongman Pinarayi Vijayan in Kerala who can all be part of the new leadership that she has hinted out. Amarinder Singh from Punjab, and others like Naveen Patnaik that Banerjee has a special relationship with can all be part of a grouping that rises above their respective political parties, and helps evolve a larger strategy for the next Lok Sabha elections.

Given the tough fight, and her strong resistance Mamata Banerjee will of course play a major role. And given the uncompromising attack on her by the BJP, will work on this with some relish. Interesting days ahead. 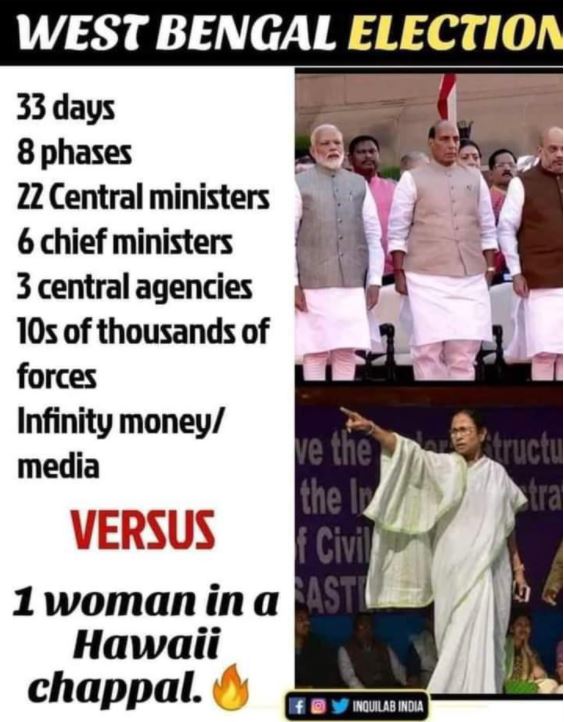