The Most Important Lesson From the West Bengal Election

Master strategist Prashant Kishore made a significant point in an interview to NDTV that seems to have escaped the headlines that seem to be centred around his decision to quit managing the election strategy of leaders across the political spectrum.

The point he made, while explaining his strategy for West Bengal, was that it should be understood that polarisation has a limit. There is so much it can do and no more. And that the Bharatiya Janata Party through the hype its propaganda machinery is able to create puts all political opponents on the defensive when it comes to the issue of polarisation. And makes them uneasy enough to shift tactics, ignore their own vote base, and move towards the trajectory that the BJP has set, and is clearly master of.

What Kishore did not say but was apparent, was that the Congress party is perhaps the most guilty of this. Pushed to the wall with the propaganda of appeasing minorities it has always, as we have seen in most elections in the northern states, moved away from its vote bank to try and garner support within the vote bank that the BJP actually controls. Merely so that it can escape the accusations, without realising that its strength lies in its base that then often goes helter skelter unable to understand the new message emanating from the Congress party more oft than not.

In West Bengal Mamata Banerjee despite the concerted attack by the BJP where no adjective was spared, stuck to her guns. Clearly she must have been nervous too, facing the canons alone, but she refused to compromise what had been her agenda for the people of the state, stayed with the voters, and at the end of the day trounced the BJP and stilled its propaganda. At least for the moment.

Quite unlike the Congress that drops the minorities from its list of candidates, is hesitant to give them berths if elected to power (which is becoming increasingly infrequent now), and changes the itinerary of its top leaders to visit temples rather than peoples bastis. The result is that loyal voters are lost, others on the periphery do not consolidate, and political parties like the Congress lose ground steadily.

This logic can also be applied to the bhadralok that still seem to be holding the CPI-M in West Bengal by the short hairs, and are equally defensive on the issue of polarisation. The party has lost ground steadily, and as the results not indicate, is completely rooted out of West Bengal. Contrast this with Kerala where the Chief Minister Pinyari Vijayan has successfully brought his government back in for a second term, simply by sticking to his guns, following the agenda he had set out for the government and the state, and refusing to be distracted by the hype. The result is that the BJP lost every seat it contested, and the Left Front sailed back to power.

Kishore has explained an important fundamental of politics in India. That the people are essentially not communal, but the BJP has been able to get away with the polarisation by making the opponents retreat from the field as it were. Unthinking political parties have been unable to confront the BJP on their own turf, and instead jump into the swamp it has lured them into. The result is defeat as in Uttar Pradesh where Mulayam Singh Yadav lost the plot a long time ago courtesy Amar Singh, and where his son Akhilesh Yadav was unable to firm the strategy that had made the Samajwadi Party a force to reckon with in the state. The BJP and media blitz placed Yadav on the defensive, to a point where he even refused to visit Muzaffarnagar several years ago where the first landmark, if one calls it that, violence had taken place just before the first Lok Sabha polls that brought BJP to power.

West Bengal thus, can be a game changer for the Opposition provided the other political parties draw the right lessons from the election results. Stalin who has brought the DMK to power in Tamil Nadu is clear about what he and his party stand for, although he has not faced the kind of pressure that Vijayan has in Kerala but who has withstood it and held steadfast. However, all credit has to go to Mamata Banerjee, the lone woman who refused to buckle despite a political assault calculated to bring her to her knees. Kishore can take the credit, but as he himself said, all applause should be reserved for the Chief Minister of West Bengal. 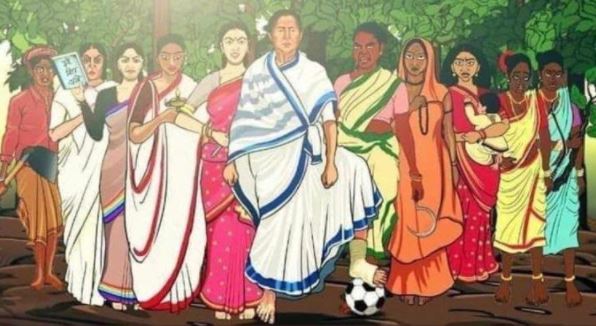