Why Did Celebrities with Bloated Egos Get the Bengal Election So Horribly Wrong?

Barring a few, primetime TV anchors in India have airs as if they were Salman, Shahrukh and Aamir rolled into one! They are full of themselves; brisk, brash, dismissive, interrupting invited guests before they can finish a sentence, insisting that what they say is Gospel and the rest is utter rubbish, announcing their verdict as though it’s written in stone.

All this was on display on the eve of the counting of the votes including for West Bengal, when each channel had lined up half a dozen or more experts to share their gyan and comment on the exit polls. One of the most respected and popular channels hosted a two hour long analysis with charts, graphs and inputs from their reporters on the ground, with the guests beamed into the studio on May 1.

They also had their psephologist in tow, who had supposedly followed the voting patterns district by district and phase by phase, and carried out a comprehensive study and analysis of the exit polls and Maha exit poll to deduce his numbers of seats likely to be won.

Their Principal Anchor, who has become almost a cult figure for cub TV reporters having covered five parliamentary elections and written a book about elections blurted out: this was the most hotly contested election in West Bengal where the BJP and the TMC were neck and neck, and the toss could go either way, so the most likely outcome could be a hung assembly!

Their other anchor, who looms large at Conclaves, said that going by the field reports and the psephologist’s analysis, he thought the BJP had an edge over the TMC and might get 136-165 seats.

Now when the results are out and they have been proved horribly wrong (only one poll predicted 196 seats for the TMC) they have egg on their red faces but don’t have the humility to admit publicly that they were wrong and just apologise. It requires moral courage to admit one’s mistake and say sorry. Obviously, the celebrity anchors don’t have it.

Or there is something more than meets the eye? It is hard to believe that the methodology, sampling, analysis and anecdotal evidence can gone so wrong for so many channels, some of which have been in the electronic broadcasting business for decades. Is there some truth in the narrative circulating in the social networks that, as the counting of ballots approached, most TV channels had internally realised the BJP had failed to dislodge the TMC, but lacked the spine to air their views in public?

If this is true, the Fourth Pillar of Indian democracy has not only been breached, it has been browbeaten. Unless its Stars gird their loins and stand up to be counted, it will become a mere talking shop.

There has been a flurry of critiques and commentaries offering various reasons why Mamata Banerjee retained her Chair. In my opinion the following factors proved crucial:

Fearless leadership. Banerjee didn’t inherit her mantle from a political dynasty or by affiliation with a powerful pan-India organisation like the RSS. She is a self-made politician risen from the streets and is fearless. She wasn’t intimidated or overawed or scared by the forces ranged against her:

- Home Minister Shah’s organisational strategy, the machinery and might of the State and his own brand of rhetoric

- Earnest and extensive spadework done on the ground by RSS cadre

- Use of the CBI and Enforcement Directorate against some of her supporters, to scare them into implicating her in their wrong doings

- Desertions by some of her close associates including Suvendhu Adhikari

- Relentless media blitzkrieg projecting her government as corrupt and guilty of inciting violence and ‘appeasing’ Muslims.

Modi and Shah campaigned aggressively, drew huge crowds, raised the sensitive slogan ‘Jai Shri Ram’ (which they reportedly didn’t use in Assam or Tamil Nadu or Kerala) to argue that Banerjee was pro-Muslim but not pro-Hindu, created the perception in the media that she was bound to lose, and that for Bengali voters it was a choice between vikas (development) a BJP government would usher in and the vinash (destruction) the TMC’s return to power would hasten.

Yes, there was a degree of anti-incumbency sentiment but it wasn’t as widespread or as sharp as the BJP asserted. Corruption charges might not have been totally baseless but whether corruption was higher in West Bengal than in some BJP ruled states was debatable. As for violence, the TMC cadre is as vicious in administering violence against their political opponents as the Left once was – but whether Banerjee gave her nod for violent attacks is highly questionable.

Yes, she was passing through a rough phase and was vulnerable but concluding that she was beatable was premature. The BJP thought she was, and pulled all the stops to unleash vicious attacks on her – mostly negative thinking that the wind was blowing against her, so many voters would desert her.

They also calculated, that if they could add 4-5 points to their 40% vote share in the 2019 parliamentary election they would be through. In their analysis, polarised Hindus would vote for the BJP en masse while polarised Muslims wouldn’t.

The only person besides Banerjee who didn’t think she would lose was her election strategist Prashant Kishor, whose young team had travelled extensively to conclude that Banerjee’s policies had benefited the agricultural sector, the poor and women who would stand by her, as would her Muslim supporters while the Hindu votes would split.

The chief minister’s exhortations to vote for the daughter of West Bengal against the outsiders resonated with millions of Bengalis. Modi’s taunt of ‘Didi, O Didi’ and some of Shah’s jibes didn’t endear themselves to the Bengali masses, especially the women.

Banerjee, never to miss the advantage of optics, used her wheelchair bound campaign as a master stroke - an injured woman, canvassing tirelessly through the streets, hunted and haunted by the mighty leaders of the central government and the BJP, painted the poignant picture of an indefatigable Street Fighter.

Banerjee’s victory is a repeat of what happened in Delhi, where in spite of all their efforts the BJP could not defeat Arvind Kejriwal. They lost badly, twice. The moral of the story is simple: if your policies have genuinely benefited people, they will stand by you. The political power, money power, or use of state agencies cannot deter them.

Ambassador Surendra Kumar is retired from the Indian Foreign Service 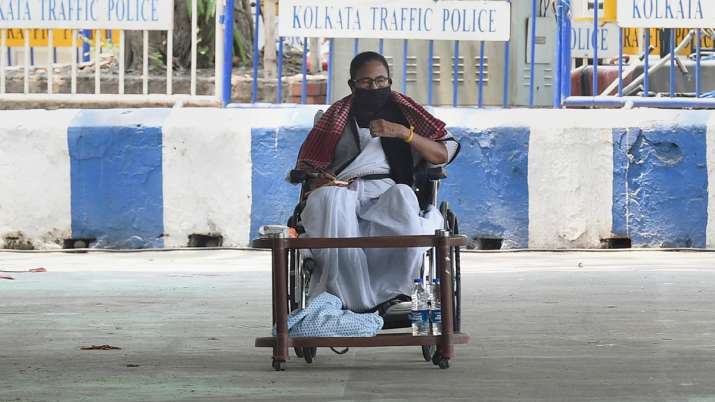