On May Day 2020, a year ago, I had written a piece/open letter titled ‘May Day’. This was in response to the dire situation in the country in the wake of the Corona Pandemic, the Lockdown, and the shocking spectacle of thousands of homeless, jobless and hungry migrants tramping home thousands of kilometers from metro cities across the country. But when I use the words ‘May Day’ today in 2021, it is in the context of the unprecedented nationwide crisis in which we find ourselves. Tragically, the situation is worse than anything we could have imagined a year ago. In a series of letters dated March 27, April 18 and May 2020, I had made appeals to everyone from the Supreme Commander, the Prime Minister, and the top brass in the Armed Forces, urging that they consider deploying trained personnel from the Armed Forces in their legitimate role as ‘aid to civil power’. I had hoped that this could have been a way to extend urgent assistance and support to the hundreds of fleeing migrants from cities across India, who were among the most vulnerable among our population.

I had used the phrase “Unprecedented situations call for unprecedented measures – and this suggestion may be treated solely in this spirit”.

Sadly – there was no response, except for a routine acknowledgement from the offices of the three Service Chiefs.

Today the nation is literally gasping for breath. People are lining up for vaccines where there are none, and the lines at the cremation grounds are growing longer by the day. India is sending out May Day signals and SOS appeals to the world for oxygen, for vaccines, and for medical equipment. There is a growing sense of fear, desperation and even anger among citizens at all levels.

I am a former Head of service, perhaps one of the oldest still living. I had the privilege and honour to serve my country in uniform for over four decades. I have seen action in war and been decorated for gallantry. For nearly three decades post retirement I have lived in a rural area and continue to be engaged with both public affairs at the national level and local community issues.

My immediate and ongoing concern continues to be about the role that the Armed Forces of our country should, and could, be playing at this time of national crisis. Indeed we are using military terminology of this being a ‘war’ against the Corona Virus. If it was grim in 2020 – the situation today in 2021 is nothing short of a National Emergency with grave implications for Human Security and therefore for National Security.

The civil rights and liberties of citizens are temporarily curtailed under the respective Acts of the Army, Navy and Air Force for those of us in active service in the Armed Forces. However we are basically citizens of this country with the same rights and duties enjoyed by civil society once we are no longer in uniform. This is an essential feature of our Fundamental Rights as enshrined in our Constitution.

I also believe it is important to reaffirm that we who have served the nation in uniform and are senior veterans today, have a bounden responsibility to act as “conscience keepers” at moments of national crisis. Responsible veterans of integrity would therefore see it as part of their Constitutional Dharma, that they offer professional, objective and apolitical advice and counsel on matters of national concern and national security.

As military persons we were encouraged to do this throughout our service careers. Post retirement, if anything, one has learned the importance of doing so without fear of being branded as ‘dissenters’ who are critical of government, and often dubbed as ‘unpatriotic’ or ‘anti national’!

Last year, at the height of the Corona pandemic, sadly the more visible contribution of the Armed Forces to the dire situation faced by lakhs of our citizens – frontline workers, migrant labour, landless , farmers, women, men, children was inexplicably restricted to largely meaningless tokens, such as ceremonial flypasts by aircraft, showering of flower petals, band concerts and illumination of warships. This despite urging the MOD and the those at the helm, that the services of the military be made available as part of aid to civil power, in supplementing existing efforts to ensure provision of essential services – from rations, to food kitchens, to transportation and medical services etc.

That this suggestion did not meet with any response, is in many ways a sad reflection of the system. In a wider sense it can be viewed as part of the insensitivity of our privileged to the trauma and travails of the vast masses who toil to keep the wheels of our system going.

This is not the time or the right forum to go into the complex set of reasons and circumstances which have brought the nation to this critical pass. Although that too must be done at a later stage. As with any tactical exercise, we need to identify and address the reasons for the multiple failures we are facing at the level of policy, planning, and implementation. Most importantly we need to learn the right lessons.

Right now we are a nation under siege – and the health and humanitarian crisis we are facing is nothing less than a war that is being waged against our most precious human resource, namely our own people. And therefore it warrants nothing less than a mobilisation as we would if we were actually going to war in the conventional sense of the term. The enemy we are facing is one that cannot be dealt with by submarines, fighter aircraft and missiles. But the enemy, the Covid 19 Virus, with all its dangerous mutants and variations, is no less lethal than any modern armoury including nuclear weapons. If anything it is immune to everything we have in our conventional inventory, and therefore demands a collective, innovative and bold National Response.

We have our forces stationed and located across the country. It requires the political will to call for the assistance of the Armed Forces to provide a desperately needed boost to reinforce the present woefully overstretched infrastructure by way of hospitals, health care, trained personnel, health workers, transport, and equipment.

Our forefathers had foreseen every possible contingency whereby the Military could be mobilised as a constitutionally mandated move to provide ‘Aid To Civil Power’ – with temporary authority being delegated in consultation with local civil authority.

So here is a proposed ‘TOOL KIT’ for possible action by the military in what is a National Emergency without precedent.

Civilian and military personnel and infrastructure to work in tandem – with allocation of duties and responsibilities according to expertise .

Draw upon the best practice already operationalised in some states and cities, regardless of political and other sectarian considerations. For example Kerala, and Mumbai Municipal Corporation as just two recent examples which seem to be making some headway.

Set up special Task Forces of Veterans and Women, who can be requested to be available for counselling, providing a shoulder to those in distress, giving authentic information and other forms of assistance. Between the several Armed Forces Wives Welfare Associations, the Veterans associations, there is a wealth of Human Resource expertise available. These need to be harnessed and their good will solicited. In war time these sectors have always responded by donating gold or bandages! Right now we need to draw on their valuable reserves of time, compassion and love, to restore and heal a nation that is deeply wounded.

The Ops Rooms in turn will be able to monitor, record, all relevant information, prepare data bases and then facilitate what many experts are recommending as one possible way to control this mounting human health tragedy – namely a humane, nationwide ‘SHELTER AT HOME’ Initiative.

As a former serviceman who has worn the uniform with pride for over four decades, I can only evoke the stirring words of the Father of the Nation, at whose Samadhi at Raj Ghat, I went to pay my respects before taking over office as the Chief of Naval Staff in 1990.

Gandhiji had said we should make it our mission “ to wipe every tear from every eye. Think of the poorest person you have ever seen, and ask if your next act will be of any use to him or her.”

Today fear and insecurity has affected all sections of our people. As always it is the poorest who are the worst affected – those with means, will find ways to cope. We need to restore confidence. We need to overcome fear. We need to work with good co-ordination and allowing no space for narrow, divisive and petty politics in this purposeful endeavour .

It would therefore be appropriate and timely for the top leadership of the Military to take the initiative to convene a multi-disciplinary COVID Task Force; to conduct a SWOT Analysis; and prepare an Action Plan which can be operationalised at the earliest in close consultation with Civil Authorities across the country.

This will require some of our best minds to be brought together and calls for “Out Of The Box” thinking.

Finally, this is a personal appeal to all, civil, military and political parties alike, to join hands in a demonstration of National Unity - to work together, draw upon and pool the best resources – public and private, in a unique common endeavour.

This is a call for each one of us to take a silent pledge to suspend all political, electoral, religious and communal agendas, for building a constructive and workable Peoples Movement and a road map for the Way Ahead to successfully counter Corona.

This is above all a call to bring together our people in all their diversity and plurality to push for the formation of an emergency National Government, at least to meet the current pandemic challenge. Perhaps this could truly reflect our age old vision of Vasudaiva Kuttumbakkam, in an initiative that will not only unite us internally but will also create a favourable and positive energy in our neighbourhood.

"Since writing the piece , it is heartening to note that there are some positive steps already being taken and which have been reported in the media.

From the Navy Foundation - the Navy Chief has called on the PM and apprised him of several steps being taken by the Navy to assist in the crisis.

And the article below details a fine initiative taken by the Director General of the Armed Forces Medical Services, Lt Gen Kanitkar

These are encouraging signals - and hopefully the required scaling up will be pushed from the highest level." 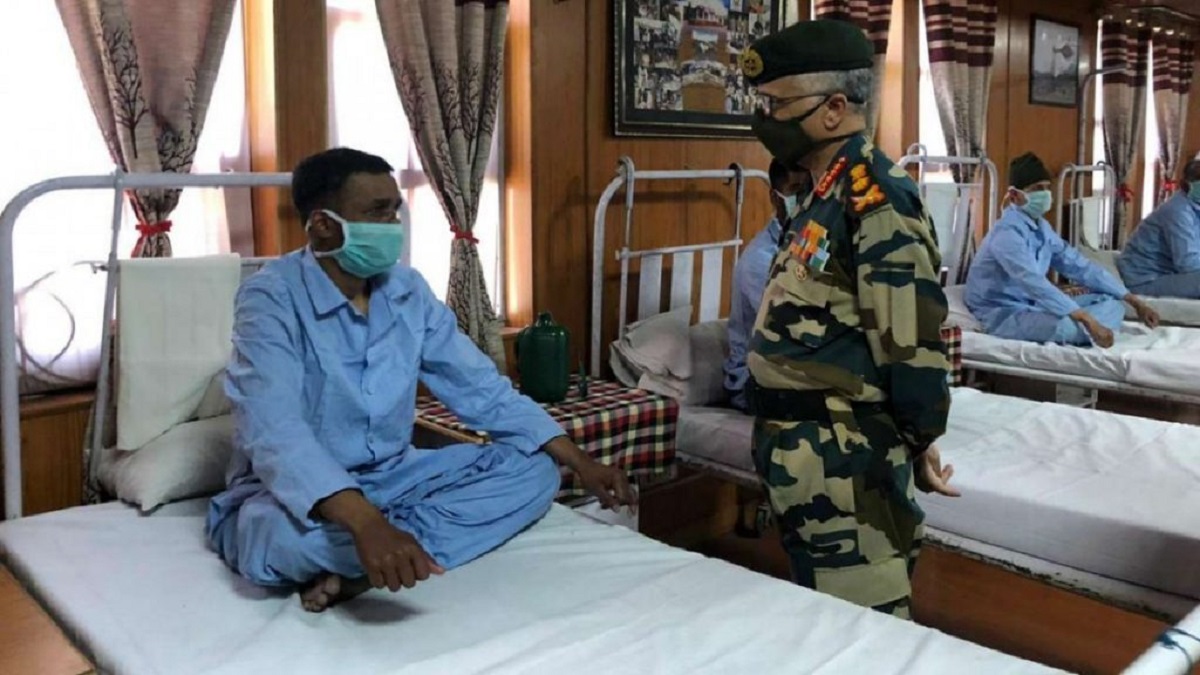