WHAT IS WRONG WITH DIPLOMACY THESE DAYS?

New style of diplomacy does not resolve issues

An extra-terrestrial being (ETB) observing our world for centuries might wonder whether the pandemic has diminished diplomatic skills of the professional diplomats and their political bosses. She might take note that starting from the dawn of the 21st century, if not from the collapse of the Cold War in the early 1990s, diplomacy as practiced has been proving itself less and adequate to the resolution of problems in inter-state relations. Often the new style of diplomacy has aggravated the disputes, instead of resolving them.

Permit me to give an example of the old diplomacy. In the early 1970s, I was First Secretary in Vienna. I remember even today, after more than 50 years, Australia’s coming out with a proposal at the Board of Governors of the IAEA (International Atomic Energy Agency). India had not signed the NPT (Nuclear Non-Proliferation Treaty) and Australia’s intent was to reduce the role of the non-signatories in the IAEA.

India too was on the Board, with my Ambassador V.C. Trivedi (VCT) as governor. As soon as the Australian Ambassador had finished, VCT took the floor; he felicitated his ‘distinguished Australian colleague’ for the thoughtful proposals made; talked about the democratic values and the Commonwealth links that bound the two countries, even sharing their national days. (Australia Day falls on January 26, our Republic Day. Diplomats used to come to the Indian Reception first and then rush to the Australian function for a drink.)

VCT would seek permission of the chair to make a few, stray, observations on the matter under discussion… By the time VCT sat down he had demolished the Australian proposal.

When the Board rose, VCT was the first to get hold of the Australians for a chat till the cars came.

Do we find anyone taking a leaf from VCT’s book these days?

Let us not confine ourselves to India.

The United States has one of the best diplomatic services. In India, the Union Public Service Commission spends half an hour or a little more to interview each candidate and assess her suitability for the higher civil service. The U.S. does not have a service corresponding to the I.A.S. The Department of State is in charge of recruitment to the foreign service. The interview lasts for hours.

Recently, after Biden took over as President, Secretary of State Antony Blinken had his first physical meeting with his Chinese counterpart at Anchorage, Alaska. The meeting commenced on March 18, 2021. We may note how Blinken prepared for the meeting:

The State put out signals days before the meeting that it had ‘low expectations’ from the meeting.

The day before the meeting Washington announced sanctions on Chinese officials, and China retaliated in kind.

Let us look at what happened at the meeting. It is customary for the media with camera to be invited to listen to the opening statements of the two leaders. Such statements are supposed to sum up the basic approach and to express the hope for a successful discussion. Instead, the American side chose words that offended China which gave it back in the same coin. In fact, this public part of the talks, the public spat, lasted for an hour, including time for interpretation.

Let us look at one or two samples.

U.S.- accused the Chinese of "threatening” the rules that maintain global stability

China –charged the US with “condescension and hypocrisy”

Blinken is in high company. His President was asked in public whether he saw a ‘killer’ in Putin. Biden said yes, and days later said in public that he wanted to have a meeting with Putin.

According to the old diplomacy, Biden should have said that he would not make any personal remarks about another head of state in public.

Even President Barack Obama had made a cardinal deviation from the old style of diplomacy. 2014 was the 70th anniversary of the Normandy Landing. Obama and others were hosted by the French President Francois Hollande. Obama refused to sit for dinner at the same table as Putin. (Putin had annexed Crimea.) The host was compelled to eat two dinners that evening.

Obama deviated unwisely from diplomacy. It is the cardinal rule of diplomacy that you deal with the person in office whether you love or hate that person. You speak in private as tough as needed.

Let us come nearer home. When India took the hard line with Pakistan saying that there would not be any talks till India is satisfied that Pakistan had stopped sending terrorists to India, that reminded me of the Obama line towards Putin in Paris. Fortunately, India has changed that policy. I was personally rather intrigued that India needed the U.A.E. to mediate with Pakistan. Was it necessary or, even desirable?

The recent protest note sent by the Indian Deputy High Commissioner to an Australian daily was avoidable. The language used was undiplomatic. Of course, the daily had used rather colorful language. A good diplomat does not get provoked.

The purpose of diplomacy is to persuade the other to accept your point of view. If one starts being aggressive, one ceases to be persuasive. The DHC could have asked the editor for a drink or a meal and put across the Indian point of view and then sent a letter or, better still, sent an article.

I was amused and upset alike to see the twitter war between the External Affairs Minister and Dr. Jairam Ramesh. The New Zeeland mission urgently needed oxygen. The Youth Congress delivered it, and predictably let the world know that it had done it. The Ministry of External Affairs need not have taken note of it in a manner giving the matter such wide publicity.

Incidentally, the New Zealand High Commission did not break diplomatic protocol in accepting and paying for oxygen delivered to it. It is only when a mission imports alcohol and other such items from abroad that Protocol’s clearance is required at the customs. Suppose there is shortage of sugar. Is the diplomatic mission obliged to approach Protocol? Technically, it is entitled to seek assistance. It is not obliged.

However, New Zealand’s Prime Minister Jacinda Ardern handled the matter with admirable diplomatic finesse. She said that her High Commission had apologized to the Indian Ministry of External Affairs, adding that the oxygen was urgently required.

The MEA has now firmed up arrangements to assist the diplomatic missions in such emergencies.

Ambassador K P Fabian served the Indian Foreign Service from 1964 to 2000. Currently, he is Distinguished Fellow at Symbiosis University. 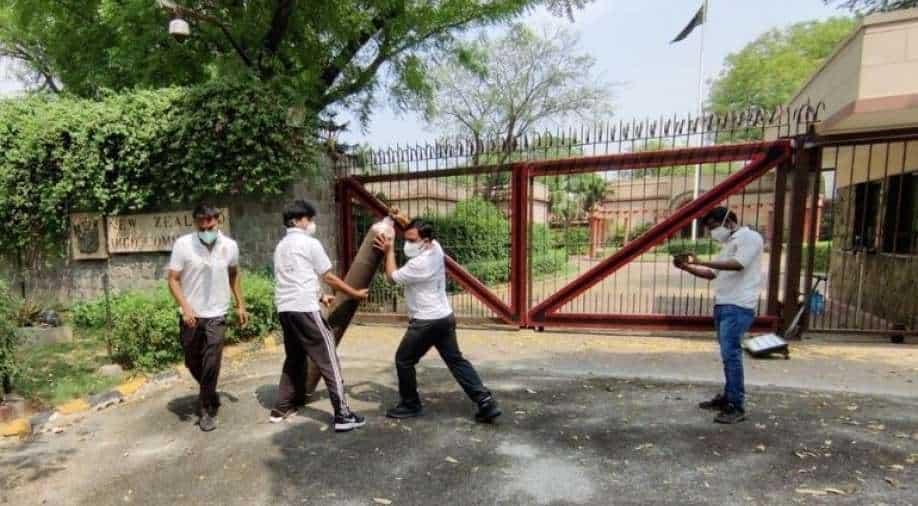