Gross mismanagement of the pandemic

The results of the just-concluded Assembly elections give us an indication of ground-level political changes in the key states of Assam, West Bengal, Kerala and Tamil Nadu.

While it's important to understand the results in terms of state-specific factors, the overall political outcome indicates a successful assertion of local/regional politics against the majoritarian-authoritarian politics of the BJP.

The centrality of the local is visible from the Lokniti-CSDS survey which underlines the primacy of local factors and state leaders with a mass base in determining the choices of voters. The reasons for this vary from state to state but the limits of Hindutva's expansionist politics and its agenda of polarisation are apparent. This has decisively dashed the BJP’s avaricious plans of conquering new territories.

These setbacks suggest that the polarising rhetoric of Hindu nationalism doesn't thrive everywhere in India, especially in regions with a distinct culture, a history of social movements, strong secular tradition, and where vernacular languages hold primacy instead of Hindi.

It showed how stunningly out of touch the BJP is from the political reality in these states where it was holding Uttar Pradesh (UP) Chief Minister Yogi Adityanath’s road shows, chanting slogans of Jai Shri Ram, talking love jihad and trying to excite Hindus with anti-Muslim dog whistles. None of this seems to have worked.

The BJP lost decisively in Kerala (not winning a single seat), its alliance lost in Tamil Nadu (BJP won only four seats), and it lost spectacularly in Bengal (winning 77 seats, way short of 200 it boasted). The central point of the election outcome is that the majority of Hindus voted against the BJP to keep it out of power in three important states.

But this rebuff did not occur in the core areas of BJP's support base in northern and north western India and these will be tested in the polls in 2022. The RSS has changed the political discourse in these states, especially in UP. But it would be a mistake to presume that issues of unemployment, jobs, farmers’ distress, regressive farm laws and the massive Covid mismanagement will not matter in India’s most significant state.

In addition to Covid, the continuation of the farmers’ revolt, which began in November 2020, is likely to shift the balance of forces in many of these northern states, from Haryana to UP to Gujarat.

The gross mismanagement of the public health crisis in UP makes it one of the worst hit states with high caseload and fatalities. UP has an archaic and creaky medical infrastructure which is collapsing as Covid rages unchecked through the state with people running from pillar to post in search of hospital beds, including in the big cities of Lucknow, Kanpur, Allahabad and Banaras. The situation in villages and small towns is much worse. The virus has now reached rural parts where people are struggling to breathe.

However, the state government is claiming that it has the situation under control. This shows how completely unmindful it is of human suffering. Amid the surge of the virus, the Chief Minister has issued orders to set up help desks for the protection of cows in each district of the state and has directed that Covid-19 protocols are maintained at all cow shelters, including stocks of equipment like oximeters and thermal scanners “for cows and other animals as well”.

The order comes while UP suffers from a crippling shortage of medical supplies and oxygen. Instead of tackling oxygen shortage, the government has slapped an FIR on a Lucknow city hospital, accusing it of spreading false rumours of shortage.

While people in the state are desperate for oxygen, its Chief Minister denies there's even a problem. The denialist rhetoric and the government’s indifference to the crisis will impact the BJP’s popularity in UP. A report in Mint pointed out that even hardcore BJP supporters and party workers are sharply criticising the government’s maladministration in WhatsApp groups in UP.

The growing anger against the BJP leadership's handling of the Covid crisis has found resonance in the panchayat polls. Opposition parties have won close to 50 per cent of all seats contested and swept districts which are BJP strongholds. The BJP is losing ground in Ayodhya, Varanasi, Mathura and Gorakhpur which is an important development given how much political attention has been showered on these cities by the government.

But let’s not forget that Modi and the BJP have the ability to turn things around. They did it after demonetisation, sweeping UP in the 2017 Assembly elections even though everyone had predicted an adverse fallout for the party. However, the post-Covid situation is different. What the pandemic has done, unlike the disaster of demonetisation, is bring to the fore the BJP’s incapacity for governance.

It has shown the sheer incompetence of the majoritarian model of governance based on a politics of hate and obscurantism which is just not suited for running a modern state. It’s not simply a failure of the Indian State but a failure of the BJP model of the State. The administrative ineptitude and the government’s insensitivity are impossible to ignore even for those intoxicated by the right-wing’s electoral successes.

The huge governance failure in UP, in contrast to Kerala, for example, reminds us during the worst crisis, that a governance model can make the difference between life and death, and the absolute criticality of a politics based on empathy, concern, planning and human development in comparison with one based on building religious places of worship and vanity projects such as the Central Vista in the Capital in midst of the calamitous second wave.

The BJP’s defeat in West Bengal, Kerala and Tamil Nadu shows the limits of Hindutva. It shows regional parties can overpower Hindutva at the state level and hence the BJP cannot assume a natural monopoly over state politics. However, regional politics cannot counter the hold of Hindutva in UP which has been the BJP’s pathway to power in 2014 and 2019.

The Hindutva project has built an enduring communal majority in the Hindi heartland. Its overwhelming size and support in this region give the BJP an overwhelming advantage over its rivals. Therefore, majoritarianism and the claim of the majority to dominate have to be challenged in these states.

The most effective way of doing this, apart from building big-hearted alliances, is to claim greater equality of rights of every section of the people and region, and not simply the inclusion of minorities through the revival of pluralism.

This article is also published in The Tribune, Chandigarh. 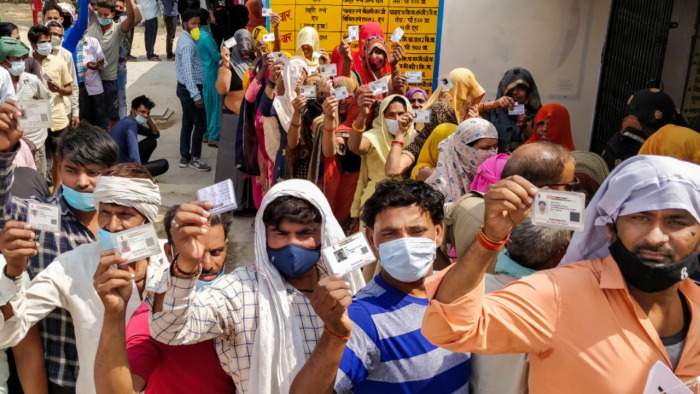