Gaza- A “Cash Cow” For Netanyahu and Israeli Arms Industry

Over 119 Palestinians dead, including women and 39 children

“Both sides need to de-escalate.”
“No one benefits from this. ”

You’ll hear a lot of statements like that from pundits, elected officials, government spokespeople, and mainstream media anytime there’s violence in Israel-Palestine.

In the last few days, Israeli war planes, armed drones, and artillery mounted on tanks have killed more than 119 Palestinians in the besieged and blockaded Gaza Strip. Thirty-one of them were children. Rocket fire from Gaza left eight Israelis, including one child dead.

It’s easy to say no one benefits. But it’s not true.

Binyamin Netanyahu, Israel’s prime minister, has a whole lot to gain from this assault — among other things, it may keep him out of jail. More broadly, Israel’s strategic military planners have been waiting for another attack on Gaza. And for Israel’s arms manufacturers, assaulting Gaza is what the leading Israeli daily newspaper Ha’aretz has called “a cash cow.”

It’s important to understand the specific factors that led to the current escalation in Israel’s horrific air war against Gaza.

The Hamas rocket fire that began on May 10 did not come out of nowhere. It was a response to Israeli police and settler attacks against Palestinians in Jerusalem, indeed across much of the West Bank as well.

Those attacks included demolitions to force Palestinians out of their homes and the continuing threat of eviction for families in the Sheikh Jarrah neighborhood of occupied East Jerusalem. They included police denying Palestinians access to the steps of the Damascus Gate of the Old City, their traditional gathering place to share iftar (sunset) meals during the fasting month of Ramadan.

And they included the deliberate provocation — not only to Palestinians but to Muslims everywhere — of Israeli police raiding the al-Aqsa Mosque, the third holiest site in all of Islam, shooting stun grenades, tear gas, and rubber bullets at worshipers at morning prayer in and around the mosque.

Meanwhile, given the experience of Gaza’s 2 million people — half of whom are children and around three-quarters of whom are refugees, who have lived through 14 years of a crippling Israeli blockade of the over-crowded, impoverished strip — it was hardly a surprise that such provocative actions would lead to a military response from Hamas.

But these actions don’t explain Israel’s choice — and it was certainly a choice — to immediately escalate its military assault to the level of full-scale war. So what does explain it?

Prime Minister Netanyahu is on trial and facing years in jail for a wide range of corruption charges. As long as he remains prime minister, he can’t be jailed — but if he loses his ruling coalition, as he was on the verge of doing just before this crisis, he could go to prison.

So for Netayanhu, maintaining public support is not just a political goal but an urgent personal necessity. The mobilization of troops and the sight of Israel’s military in action allows him to reprise his longstanding role as the ultimate “protector” of Israel against its “enemy” — whoever the chosen enemy du jour might be.

It might be Iran (which, unlike Israel, does not have a nuclear weapon or a nuclear weapons program). It might be the non-violent BDS (Boycott, Divestment & Sanctions) campaign, which leading Israeli leaders equate with Iran as an existential threat. Or it might be Gaza — as it was in 2008-2009, 2012, and especially for the 50 days of Israeli bombardment in 2014 that left 2,202 Palestinians, including 526 children, dead.

Netanyahu’s political capital is also bound up with his claim to be the only Israeli leader who can maintain the key levels of absolute impunity and uncritical economic and political support from the United States. Certainly the Trump years were characterized by Washington’s warmest embrace of Netanyahu’s right-wing government and the most extremist pro-Israel policies to date. But so far President Biden, presumably convinced that moving to restore the Iran nuclear deal means no other pressure on Israel is possible, has recalibrated only the rhetoric.

Washington’s actual support for Israel — including $3.8 billion in military support every year and the one-sided “Israel has the right of self-defense” rhetoric that refuses to acknowledge any such right to the Palestinians — remains in place. And history shows us that direct U.S. backing — in the form of additional cash and weapons as well as effusive statements of support — rise when Israeli troops are on the attack.

Beyond the political advantages, there are strategic advantages for Israel to go to war against Gaza. Despite the withdrawal of Israeli settlers and troops from inside the Gaza Strip in 2005, since 2007 Gaza has remained under an Israeli-imposed blockade and siege. It is, under international law, still occupied.

And for years, Israel’s strategy towards Gaza and the Palestinians who live there has been one of absolute control. Israel controls who can enter or exit Gaza, which means control over people’s lives — and deaths. In the past, Israel has determined exactly how many calories Gazans should be able to eat each day — to “put them on a diet,” as Israeli military officials said in 2006.

And not surprisingly, Palestinian resistance to the years of siege and occupation in Gaza has at times included military resistance.

During the 2014 war, the influential Begin-Sadat Center for Strategic Studies issued a report endorsing what had already become a standard approach for Israel toward Gaza. It was called “Mowing the Grass in Gaza,” and it described the lethal military assault as being “in accordance with a ‘mowing the grass’ strategy. After a period of military restraint, Israel is acting to severely punish Hamas for its aggressive behavior, and degrading its military capabilities — aimed at achieving a period of quiet.”

The report ignored the fact that Israel is an occupying power, that the people of Gaza are protected civilians, and that collective punishment, the destruction of civilian infrastructure, and the use of dramatically disproportionate levels of violence are all violations of international humanitarian law, the Geneva Conventions, and more. The report’s author was unequivocal that “a war of attrition against Hamas is probably our fate for the long term, and we will quite frequently need to strike Gaza in order keep the enemy off balance.”

Initiating periods of intense violence in Gaza, even when the resistance was non-violent such as the 2018 Great March of Return, has been Israel’s approach ever since.

Finally, these frequent attacks on Gaza have provided a critically valuable testing ground for the Israeli weapons manufacturers whose export deals — worth $7.2 billion in 2019 — represent a huge component of Israel’s GDP.

During the height of the 2014 assault, Ha’aretz reported that the company’s factories “worked around the clock turning out munitions as the army tested their newest systems against a real enemy. Now, they are expecting their battle-tested products will win them new customers.”

“Combat is like the highest seal of approval when it comes to the international markets,” explained Barbara Opall-Rome, the Israel bureau chief for Defense News told Ha’aretz. “What has proven itself in battle is much easier to sell. Immediately after the operation, and perhaps even during, all kinds of delegations arrive here from countries that appreciate Israel’s technological capabilities and are interested in testing the new products.”

“From a business point of view,” concluded the editor of Israel Defense, “the operation was an outstanding thing for the defense industries.”

As I write this seven years later, Israel’s latest air war against Gaza continues. Ground troops are massed outside the Strip, with tank-mounted artillery weapons aimed at 2 million people crammed into one of the most crowded territories on the earth. Half an hour ago a family of six was killed in their home as tank and air strikes continue.

Far beyond some claim of “self-defense,” are there other reasons Israel might once again be on the attack? When you look at who benefits, the answer might not be so complicated after all.

Phyllis Bennis directs the New Internationalism Project at the Institute for Policy Studies. 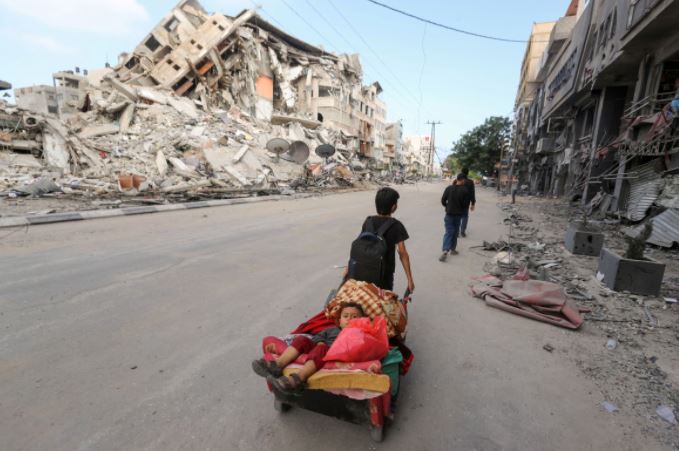