A few hours before being discharged from a Delhi hospital forenoon today — yes, Covid or its variant/mutant put me there for the last nine days, despite my having taken the Astra-Zeneca double shot few weeks previously, so effects of this strain were, mercifully, relatively mild, which hints at just how relentlessly dangerous this virus is, but ‘am back online — I heard our esteemed External Affairs Minister (EAM) S Jaishankar on CNS-News18.

I am not any more surprised by anything the MEA minister says or does. I am beyond that and fully into being simply appalled instead.

With cremation fires lighting up the cityscape, mofussil areas, and the countryside alike, and graveyards everywhere full to bursting and unable to accommodate the dead, a suited-booted Jaishankar, staring into the TV camera, unctuously mouthed inanities.

Firstly, he informed the viewers that the covid pandemic was a global thing — shades of Indira Gandhi –or was it Rajiv Gandhi? — defending herself against charges of corrupton by saying corruption was a global affliction, remember that! — the easier it’d appear for the Modi sarkar to disavow any responsibility for the unfolding public health catastrophe.

Incidentally some projections show the Covid surge is yet to peak, or that there is another Corona tsunami in the offing, in any case, it is something the Modi regime is singularly responsible for.

And because it was a global phenomenon India, Jaishankar implied, would be part of a global solution with every country pitching in to help. If that help doesn’t come– and there’s every reason to expect it won’t materialize anytime soon, what will the Modi regime do? Sit on its hands? Make a beggarly nuisance of India?

With every major country scurrying to mobilize its own national resources to meet its Covid requirements — the demand for which cannot easily be estimated, depending as it is on the estimated population size and receptivity curve, and thus only able and willing to render mostly symbolic assistance — cryogenic oxygen chambers, O2 concentrators and the like, massive offloading of rawmaterials for vaccine manufacture in India, is unlikely.

As I have written earlier, it’ll be months before Indian vaccine factories actually begin humming. Meanwhile, the Indian government will have to make do with palliatives, like maxing oxygen industrial scale production and delivering oxygen cylinders to hospitals, etc.– which activity, thanks primarily to the Indian private sector, the country has less to worry about. So, what else does Jaishankar expect the rest of the world to do?

In this respect he mysteriously mentioned the cabal of G-7 and the trio of India, South Korea and South Africa as a special group concerting, he hinted, to resolve Covid issues whether specifically in India or in all these other countries as well, he didn’t say. That wasn’t helpful.

Secondly, and this was even more troubling because it indicates just how deep down the dependency complex is now rooted in the thinking of the Indian policy establishment, he equated — and did so, oh, so, smoothly — the pandemic situations in the United States and in Western European countries who had suffered badly from the pandemic and came out of them, with India’s present condition. He said, by implication, that the governments in these countries know what’s best for India to do in its present circumstances!

Has Jaishankar not been watching the TV screen and CNN this past year and not seen there’s a universe of difference between the Covid crises in America and in the West, generally, and the one India is enmeshed in right now?

Hasn’t he looked at wailing men, women and children in thousands daily on television, people begging for puffs of life-giving O2, and the macabre scenes being played out all over of dead bodies being lit up wherever they can be — any vacant roadside spot will do — because the cremation grounds are piled thick and high and cannot take any more custom?

Does this self-consciously clever EAM not see the manifest, obvious, absolute chasm in SCALE and DEGREE of the problem India is facing, and the depressing quality of his government’s ameliorative efforts when compared to the problem the US and Europe faced with the spiking pandemic and how they dealt with it?

This is a country with 1.3 billion people — nearly a billion more than America, with a public health infrastructure at a small fraction of the US’. What the heck can the Biden Adminstation advise Delhi to do that it doesn’t already know it should have done, And considering Modi isn’t inclined to do the one thing Anthony Fauci, President Biden’s chief medical adviser, has suggested he do — order a full lockdown, again, for fear of bringing the stuttering Indian economy to a grating halt. What’s there to listen to?

Sure, even otherwise in general terms what the Indian government should have done is known to everyone in the Health Ministry at the centre and in the state governments. Indeed, all those responsible are only too aware of how badly they have fouled up every which way and are left scrambling to make excuses when not, like the UP chief minister, Adityanath, threatening to take people to court for claiming oxygen shortage!

As mentioned in an earlier post, Prime Minister Narendra Modi got complacent too quickly and once the Kumbh Mela and state elections in particular rolled around, he couldn’t summon the political will to at least call off his campaigning in West Bengal — the real pandemic facilitators, And now finds that the Indian system cannot cope with real adversity when it has come acallin’.

How concerned Modi is with the ravages of the virus on the society, economy, etc and with how badly large masses of the Indian people are being impacted by this unmitigated disaster of his making, is hard to speculate.

But there’s little doubt why he wheeled out Jaishankar before the media: It was to try and prevent an already humungous personal public relations calamity for Modi from snowballing into something lot worse- being perceived by the West whose regard and attention as no more than a run-of-the-mill showy incompetent Third World head of government. Whatever the positive aura he tried to create for himself over the past 6-odd years is now dust, especially abroad.

In the event, Jaishankar sought hard and predictably failed to do what his boss had asked him to do: Somehow cover up for Modi’s Covid mismanagement and the sense of desperation it has spawned by mooting a global solution for a seriously, strictly, Indian problem that the government cannot avoid taking the blame for.

Bharat Karnad is an independent commentator on defence and foreign policy. 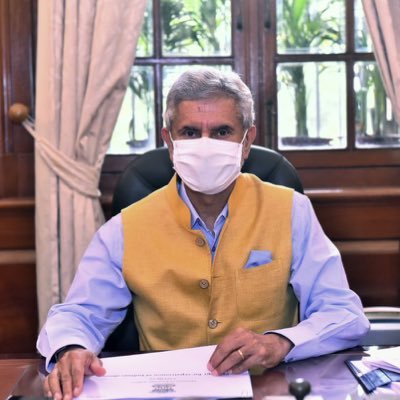 Will All Soldiers Vote?

America Wilts Under the Impact of Bin Laden and Trump

There Is No Plan(et) B Folks

The Opposition in UP