The world, including India, has let the Palestinians down

There has been no word of condemnation from any government, in the Arab world, in the West, or the rest of the world, including India.

At the time of writing, the carnage continues: Israel has killed 220 human beings—we say human beings as nobody takes his passport to the next world-- injured 1400, rendered homeless 40,000, and destroyed educational institutions, media facilities, and much else.

The rockets fired from Gaza have killed 9 human beings in Israel.

Prime Minister Benjamin Netanyahu has out-princed Machiavelli’s Prince in deceiving the world and most of the governments, including the United States. His thesis is that he started bombing in response to rocket attacks.

The obvious question that arises is: Why were the rockets fired? Was Netanyahu doing anything that provoked, and left Hamas with no other choice?

Essentially, Netanyahu finding himself unable to cobble together a majority, even after four general elections within a space of two years, reckoned that once he leaves office he will be heading to jail as his trial proceeds. He figured that a crisis that appears to threaten Israel’s security needed to be fabricated.

The best recipe to create such a crisis is to raise tensions in Jerusalem by using the state machinery to harass and humiliate the Palestinians. This time in and around the Al Aqsa mosque, one of the holiest shrines of Islam. And thereby provoke Hamas to fire rockets into Israel, and thereby open the doors for the entire world led by US President Joe Biden to rush in to support Israel.

Netanyahu calculated that the plans of the opposition in Israel to forge an alliance and form the government would thus, collapse. And he will emerge as the uncontested savior of the nation, certain to gain majority in the current Knesset during which he would be in office, and, therefore, out of jail.

The annotated chronology below will corroborate this assessment:

Netanyahu is asked by President Rivlin to form a cabinet in 28 days.

Rivlin was reluctant to ask Netanyahu whose party had only 30 seats in the house of 120.

Rivlin departed from custom and denied Netanyahu a coveted photo opportunity by not inviting him to receive the letter in person.

Ramadan begins, coinciding with Israel’s Memorial Day honoring the heroes who sacrificed themselves for Israel.

(The reader might note the linkage between terrorism and Israel. The bombing of the King David Hotel, housing the British Mandate Administration on July 22, 1946, killed 91 human beings. Prime Minister Attlee called it an ‘insane act of terrorism’.

Irgun begat the political party Herut which begat Likoud, the party of Netanyahu.)

The security forces enter Al Aqsa mosque and cut the cables so that the worshippers outside the mosque cannot hear the prayers.

Ben Givr, a member of Knesset, arranges a demonstration of extremist Jews chanting “Death to Arabs” with the silent permission of the police.

Ben Givr is a follower of Baruch Goldstein, a mass murder, who in 1994 killed 29 Palestinians and wounded 125.

Netanyahu has been after Gvir to get his vote.

Netanyahu fails to cobble up a majority. However, he decides to continue fighting.

56 legislators had told the President that they would support him.

Lapid and Naftali Bennett of the Yamina party agree to rotate the office of Prime Minister.

Netanyahu gets worried. He might have correctly assessed that if he can provoke the Hamas to fire rockets into Israel, President Biden will be compelled to come out in support of Israel.

U.A.E. and Saudi Arabia condemned Israeli action. (In fact, unwittingly or not, they were acting to Netanyahu’s script. The Hamas will be compelled to act.)

Netanyahu reaffirmed that Jerusalem was Israel’s capital implying that Palestinians would be evicted from East Jerusalem.

Lapid and Benett meet the Arab party chief Mansour Abbas and get a majority of 61.

These clashes should make it difficult for Mansour Abbas to work with Lapid-Benett and vice versa.

The Hamas issues an ultimatum to remove the police presence at the mosque and to stop the attacks on Palestinians in East Jerusalem. The deadline was 6P.M.

It was not difficult for Netanyahu to ignore the deadline and to welcome the rockets.

He had prepared the Israeli Air Force to start bombing after the rockets came.

We should note the diabolical cleverness of Netanyahu. He struck at Gaza after the rockets came.

The naïve West did not want to ask: Who provoked the Hamas?

Or is it naiveté? We shall see.

Is it correct to demonise Hamas as Terrorists?

The Hamas is a resistance organization.

Was the French Resistance in World War 2 a terrorist organization?

Israel has practiced state terrorism consistently for decades, ever since its birth, and as we have seen some its leaders were terrorists before its birth in 1948.

The Hamas won the election in Occupied Territories in 2006 January.

The voting was under international supervision. The European Union observed that it was a free and fair election, even better than the ones in some of its member-states.

The Hamas won 74 out of the 132 seats defeating the Fatah of Mahmud Abbas. The Hamas invited the defeated party to form a coalition.

The Fatah supported by Israel and U.S.—it had given$2.3 million to support Abbas’s campaign--- rejected the invitation. Abbas reluctantly appointed Ismael Haniyeh, the leader of the Hamas, as Prime Minister.

The Israeli intelligence had miscalculated that the Fatah would win the election.

Such is Israel’s hold on the West that soon the Hamas-led government was starved of funds by the West.

After a while, Abbas sacked Haniyeh. However, in Gaza the Hamas took over the administration by force.

The divide between Gaza and the West Bank got wider to the delight of Israeli secret service.

Those who brand the Hamas as merely a terrorist group are ignorant of the projects it has been carrying on in Gaza for the underprivileged. They should also tell us how else the state terrorism of Israel can be addressed without resorting to acts of violent resistance.

Of course, Gandhi’s on-violent fear-free struggle is an option. However, it is not impertinent to ask whether even Gandhi would have lasted in the Occupied Territories? Did not Israel poison Yasser Arafat?

Netanyahu started killing children and other civilians by indiscriminate bombing in the night of May 10.

Biden in his first call to Netanyahu said that his Administration recognized ‘Israel’s right to defend itself’.

Biden had nothing to say about the children and women killed by Israel.

Obviously, for Biden the Palestinians do not have a right to defend themselves. Nor do they have human rights, the most basic being the right to life. One wonders whether Biden considers the Palestinians as human beings.

Later phone calls by Biden are rather intriguing. In one, he expressed ‘support’ for a cease-fire. What humility! The sole superpower whose president claimed that America is back to lead the world to a rule-based order that upholds human rights ‘supports’ instead of demanding a cease-fire.

Why? Biden had sought permission from Netanyahu for the call for cease-fire. Netanyahu rejected it.

It passeth one’s understanding that Israel which is using American arms to kill the Palestinians, Israel the largest recipient of American support--financial, military, and diplomatic-- should be able to have a stranglehold on American policy to the region.

Israel has a population of 8.77 million out of which the Palestinians account for 20%, equal to 1.75 million. The number of Jews in Israel works out to 7.02 million. The population in the so-called State of Palestine is 5.2 million. (We say the so-called, for in reality it is only a municipality.) Adding up, Israel plus the Occupied Territories have 7.02 million Jews and 6.95 million Palestinians.

In 2014, Israel started a war that raged for 50 days. The toll was 2251 Gazans, including 1462 civilians, and 67 Israelis. The Palestinians in Israel or the West Bank did not rise up in solidarity with the Gazans.

This time it has been different. The Netanyahu regime had failed to foresee this. There was a successful general strike on May 18.

Anti-Israeli and pro-Palestine demonstrations taking place across the world tend to be underreported in the Indian media. Biden visiting Michigan to promote electric cars got a taste of it at Dearborn, home to 40,000 Arabs.

In the first Security Council meeting on May 12 India ‘condemned’ all acts of violence, especially the indiscriminate firing of rockets targeting Israel. India failed to call for an immediate cease-fire. It wanted only ‘de-escalation’.

The reader might ask: Is Israeli bombing less ‘indiscriminate’?

Diplomacy, if correctly practiced, enables a country to take care of its interests without embracing moral bankruptcy. India could have and should have displayed moral maturity.

However, this trend to divorce ethics from policy is visible in the case of Myanmar too.

Relationship is not a way one-street. Israel is not exercising charity when it sells defence technology to India.

However, we should note that India is not the only country that has not found the courage to stand up for the human rights of the Palestinians. But those of us who expected India to be a Vishwa Guru have been sorely disappointed.

Netanyahu has got what he wanted. It does not follow that he would immediately agree to a cease-fire. That way he runs the risk of being exposed to the charge that he acted like Machiavelli’s Prince.

The goal of Netanyahu and that of the Israeli military might not coincide. The military believes that ‘the lawn has to be mowed from time to time’. It will stop only when the mowing is complete, knowing well that a repeat might be required later.

Even for Netanyahu a total destruction of Hamas as Rome did to Carthage is not desirable. By projecting that Israel is in danger from Hamas and even the Palestinians in Israel and the Occupied Territory can he get votes from the easily gullible Israeli voter?

Dear reader, do you think that any intelligent voter should support a man who has served 15 years as Prime Minister resorting to baseless arguments in his defence against charges of corruption and bribery?

There is speculation that Netanyahu will agree to a cease-fire only after June 2 when the deadline for his rival Lapid to form a government will expire.

Another question: How long can Biden resist the pressure to use his powers and demand a cease-fire? Please note that the ‘peace-loving’ Biden is delivering ‘precision-guided weapons’ worth $ 735 million to Netanyahu who will promptly deliver them on Gaza.

Morally, dear reader, is there any difference between what Hitler did to the Jews with his gas chambers and what Netanyahu is doing to the Gazans with the ‘precision-guided weapons’ supplied with alacrity by Biden? 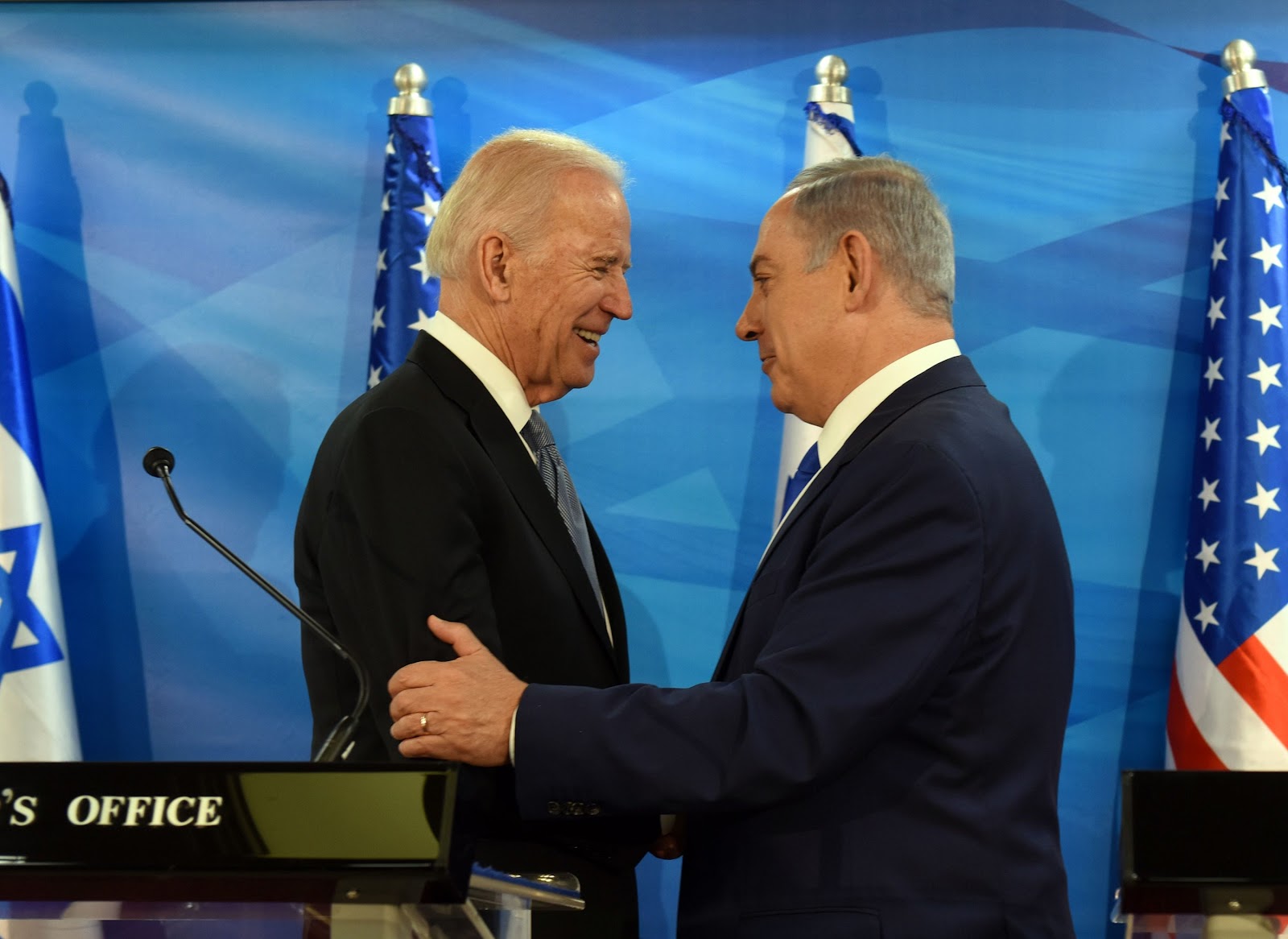