Biden Under Pressure to Harness Israel

The well-known French philosopher, writer and political activist, late Paul-Michel Foucault has written about a conversation he had with an Iranian during his visit to Tehran in November 1978 on the eve of the Islamic Revolution. The stranger remarked, “They will never let go of us of their own will. No more than they did in Vietnam.”

Foucault wrote later, “I wanted to respond that they are even less ready to let go of you than Vietnam because of oil, because of the Middle East. Today they seem ready, after Camp David, to concede Lebanon to Syrian domination and therefore to Soviet influence, but would the United States be ready to deprive itself of a position that, according to circumstance, would allow them to intervene from the East or to monitor the peace?”

These words capture the geopolitics of Israel. West Asia has been the fulcrum of the world order for more than century — that is, if one were to take into account that the colonial rule was part of a broader pattern of intervention that went back to the era of Disraeli and Gladstone, when the European powers picked at the decaying corpse of the Ottoman Empire in the mid-18th century.

In yesteryears we were told that with self-sufficiency in oil, the US has no more need to depend on the Persian Gulf region. Of late, there is talk about a refocusing of US global strategies on the Asia-Pacific. But in reality, a US retrenchment in West Asia is inconceivable.

Even if the US is no longer dependent on Gulf oil, other countries are, including China. The US would still want to calibrate the oil market. Besides, control of the sea lanes of the Indian Ocean remains a core template of the US’ Indo-Pacific strategic concept.

Above all, the petrodollar is a pillar of the dollar as world currency since 1979 when the US and Saudi Arabia agreed to use dollars for oil contracts. Petrodollar recycling creates demand for US assets and any move away from it could potentially increase borrowing costs for the USG, companies, and consumers if sources of money become scarce.

Suffice to say, to counter China’s rise as a rival power, the US must guard its gates in West Asia. All this makes Israel the lynchpin of the US’ West Asian strategy.

Meanwhile, the West Asian situation is radically transforming. The four main trends are: One, Abraham Accords has lost momentum. Clearly, the unrepresentative Arab regimes do not speak for the ‘Arab Street’. No Arab stampede to establish relations with Israel needs to be expected. Even Saudi Arabia will take time.

Two, Saudi Arabia is in transition. A reset in the US-Saudi relations is under way. In turn, uncertainties in the US-Saudi relations have prompted Riyadh to reach out to normalise ties with Qatar, Turkey, Syria and Iran. It is looking for ways to extricate itself from the quagmire in Yemen. The Gulf Cooperation Council no longer serves as a regional forum to exercise Saudi leadership.

Three, the US’ credibility as provider of security is eroding. In varying degrees, the regional states have begun diversifying their relations — gravitating towards Russia and China. Not a single West Asian country chose to identify with the US tirade on Uighur problem or with the sanctions against Russia.

Finally, Iran is on the cusp of change. The lifting of the US sanctions, which is widely expected, can only shift the regional balance in Iran’s favour. Iran’s surge adds to the gravitas of the Palestinian resistance movement.

It is against the above backdrop that the conflict in Gaza, Jerusalem and Israel erupted.

- Inter-communal riots within Israel do not augur well for national unity and stability;

- The international opinion is turning against Israel;

- Within Palestinian camp too, the leadership of Mohammed Abbas is ending while Fatah grapples with a 3-way split;

- The US-Israeli-Emirati plan to take control of the Palestinian Authority leadership has suffered a setback, while Hamas rises as the dominant force within the PLO, be it in war or peace;

- Hamas has tasted the power of deterrence; a Hizbollah-like situation is entirely conceivable where Israel’s use of force would trigger retaliation at unacceptable costs.

In this dramatic setting, the Biden Administration has begun reviving the old links with Palestinians. The US has resumed aid for Palestinians. Surely, the US has no stomach to intervene militarily. The domestic opinion strongly militates against any new Middle Eastern interventions. The emphasis is on the diplomatic track.

Meanwhile, there is a groundswell of opinion within the Democratic Party, which refuses to condone or quiesce to the Israeli behaviour toward the Palestinians. At some point, the Biden Administration may reshape US-Israeli-Palestinian relations.

The New York Times columnist Thomas Friedman recently wrote that the Biden Administration should signal to Israel that “we will be treating the Palestinian Authority in the West Bank as a Palestinian state in the making, and we will be taking a series of diplomatic steps to concretise Palestinian statehood in order to preserve the viability of a two-state solution…”

On the other hand, the blacklisting of Hamas as “terrorist” group is becoming untenable. There are red lines within Hamas too. Indeed, its view of political Islam is far from that of the Emirate. To quote from a commentary by the International Crisis Group,

“While Hamas has indicated its readiness to de facto accept Israel (notably in revisions to the Hamas charter in 2017) and to work in a government that affirms the PLO principles (which include accepting previous agreements and non-violence), it will not explicitly endorse these stipulations, which remain controversial in the movement and are considered relevant only in the context of any potential comprehensive deal and regarding which there are no reciprocal demands on Israel.”

The Hamas wants the current ceasefire to hold. But so long as Israeli policies of annexation of Palestinian territories and ethnic cleansing continue, violence continues and resistance will only harden.

Aaron David Miller, former US diplomat who has advised Republican and Democratic administrations on Middle East issues, was quoted recently as saying, “The greater irony is yet another wash, rinse and repeat cycle. Millions for Gaza reconstruction only to see it levelled in the now all-but-inevitable next round.”

Israel’s left stands greatly weakened under Netanyahu’s watch. Yet, the Biden administration has returned negotiations with the Palestinians — with the goal of achieving a two-state solution — back to centre stage after a hiatus of seven years.

But then, arguably, the US has been here before. Herein lies the paradox. The Biden administration’s shielding of Israel at the United Nations is consistent with the past US role in underwriting the Israeli occupation of Palestinian lands for decades. Yet, it is only Washington that can do the harnessing of Israel. 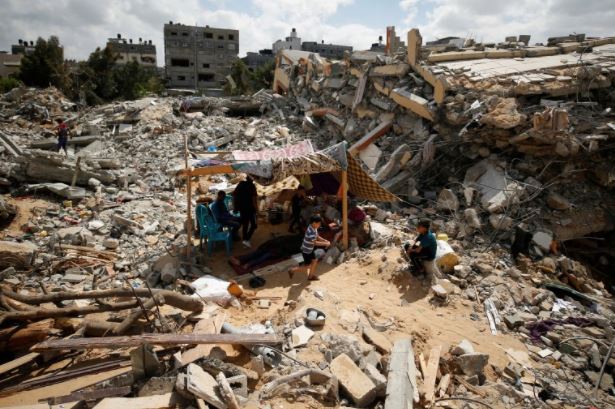