The Romance of the Highway Dhaba

Super highways are killing the dhabas

I am essentially a " dhaba " man. Give me a choice between a good, clean dhaba on a highway and a fancy restaurant and I shall plump for the former every time, even if you are paying the bill! This is not a reverse snobbishness, or my inability to decipher "Potatoes Dauphinoise" or " Coq Au Vin", but a conviction that there is no better return on culinary investment than what a genuine dhaba can provide.

I think I've acquired this trait from my dad, a rugged travelling sales executive, who had bookmarked a dozen dhabas between Hazaribagh and Kanpur when we would drive all the way in his Landmaster on our annual winter vacations.

The family would stop only at these places for breakfast and lunch, sometimes sprawling out on string charpois laid out by mine host to beat the afternoon heat. Though I must state that neither UP nor Bihar have developed the dhaba culture to the level of Punjab, Haryana and the NCR.

The role of the dhaba in my life was further reinforced during the three years I spent in Timarpur, just outside Delhi university, while studying what our Prime Minister would no doubt call " Entire English Literature."

Even back then it was not easy to get lodgings in Jubilee Hall, Gwyer Hall or Hindu college hostel and after six months of being booted out of their terraces and verandas at the midnight hour by vigilant wardens, I along with a handful of friends took refuge in the "barsatis" and servant quarters of Timarpur, at rents which the beggars outside Khan Market would spurn. One continued to stay on there after passing out of the university, even after we had all become Lecturers at the unbelievable salary of Rs. 700 per month.

Most of us were preparing for the UPSC exams- Pullock Chatterji, Anil Pradhan, Sandip Maiti, Nikhilesh Bannerjee ( he wasn't interested in the IAS or IPS, he preferred his guitar), Vinay Shukla, Rupen Guha Mazumdar, Gautam Bannerji. There were other disreputable characters too, but I can't remember their names now. During the day we would all attend our classes, and study in the evenings and late into the night.

But one thing was immutable- for dinner we would all collect at a dhaba behind BD Estate market, come rain, shine , or someone's girlfriend. ( I never rated a girlfriend but that's a story for another day, when Neerja departs on one of her trips to Kailash Mansarovar).

Our dinner dhaba was run by this giant of a man, six feet tall and a genuine 56 inch chest. His name was Pahalwan ( I have since discovered that every second dhaba owner is called Pahalwan: it helps to ensure that customers pay their bills). He claimed to have been a cook with Pratap Singh Kairon, one of Punjab's legendary Chief Ministers, and was missing a thumb as proof of it. Pahalwan's wife, equally well endowed, helped him with the cooking.

Our fare was simple- it had to be, on the allowances our dads gave us- and maybe once a week we indulged in a mutton or egg curry. Our host kept our plates filled, while we exchanged notes on our preparations for the exams. But here's the clincher- Pahalwan NEVER asked us for money, he just kept a note and told us we could pay him whenever we were able to, if necessary, after we got a job. His explanation was ( in Haryanvi Hindi, of course): "You boys have all left your homes far away and are all studying to become something in life. Don't worry about money. What kind of a man would I be if I could not feed a few students?"

In modern banking parlance we were all NPAs but, unlike the captains of industry today, not one of us defaulted on our dues to him. We all owe him a lot- cramming is so much better on a full stomach. I have not been to Timarpur again, but I hope Pahalwan has built himself a big, fancy place in Khan Market or Saket and no longer has to give credit to impecunious students.

Other dhabas stick in my mind even after many years. As an officer under training in 1976 at the Himachal Institute of Public Administration near Dhalli, a suburb of Shimla, I used to spurn dinner in the mess, and would walk a kilometer every night in pitch darkness to a dhaba in Dhalli, nodding cautiously to the occasional leopard or jackal.

This dhaba was run by a sardarji who had an auto mechanic garage on the road level and a dhaba in the basement. I am convinced he used the same oil for the car engines and the cooking. But he made the most awesome egg bhurji in mutton curry ( no meat pieces), served with tandoori roti; I had nothing else for three months and never tired of it.

As a probationer in Mandi, I once had to go to Shimla and boarded an HRTC bus. In the front seat was the local MP ( I think his name was Ganga Singh). Those were more honest days when even MPs travelled by public transport, not in lumpenised convoys of doubtfully acquired SUVs. We knew each other and got chatting. By lunch time we had reached Bhararighat, which was ( and still is) a concatenation of about twenty dhabas and sweet shops. ( The public toilet was constructed only in the eighties as an after-thought).

Ganga Singh took me to a medium sized establishment and ordered that most iconic of Himachali dishes- " kadhi chawal", Rs. 2.50 for a plate. And what a dish it was! Ever since then ( it's been 45 years) whenever I pass through Bhararighat I just have to stop and do an encore. It was a bit awkward when I was DC of the district some years later, but I used to cover up by parking my official car near the public toilet ( even DCs have bladders) and casually walking over to the dhaba incognito for my plate of kadhi chawal. 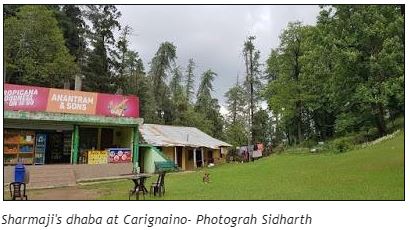 And then, nearer in time and space, there is the wonderful dhaba of Anantram Sharma at Carignaino in Mashobra. Situated in an idyllic glen five kms from my home, I discovered it only recently but it more than makes up for the absence of Food Panda, Swiggy and Zomato in these regions. The house speciality is poori- chhole, poori-aloo matar and atta halwa, all well worth a leisurely drive. Sharmaji, I'm told, is a school teacher and if he teaches half as well as he cooks his students have a bright future!

The real valhalla for dhabas, however, is the GT road, the Delhi- Chandigarh highway which I have been travelling now for almost 50 years. There's a dhaba every hundred meters, with coloured flags outside and a bloke waving you in with a flourish, not unlike Suvendhu Adhikari being welcomed into the BJP.

But here's a tip which one of my HRTC drivers gave me a long time ago- don't get taken in by fancy furnishings and hoardings, go to the dhaba which has the maximum number of trucks ( not cars or buses) parked outside it. Truck drivers spend most of their life on the road, and the one thing high on their list is good food, so where there are trucks there will be good fare ( and a surreptitious bottle of hooch, if you are so inclined). Most of these joints serve vegetarian fare, or " Vaishno" food, as they like to announce in bold letters.

I always stop at only one joint- JHILMIL DHABA just after Karnal. It's more like a desi food court with four dhabas and a number of factory outlets selling everything from shoes, gift items, pickles and home appliances. One can sit outside under a huge awning or in air-conditioned rooms inside. It has spotlessly clean washrooms. Being a creature of habit, and adventurous only when it comes to writing about Mr. Modi, I always order the same cuisine- stuffed tandoori parathas and sweet lassi: two of the former and one of the latter see me through all the way to Puranikoti, still six hours away. 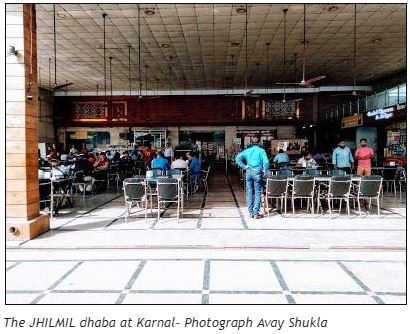 But the traditional dhaba is now facing stiff competition from more fancy variants, glitzy buildings with huge car parks of the Mehfil and Haveli variety, and branded chains like MacDonalds, Sagar Ratna, Haldiram and Bikanerwala. The GT-Karnal road ( or NH 1 ) is a gold mine for restauranteurs, with 150,000 PCUs ( Passenger Car Units) of daily traffic volume or about 600,000 folks looking to eat and powder their noses.

But I personally can't see any sense in eating the same kind of urbanised, branded stuff we eat in our cities twelve months every year- the uttapam or burger on GT road tastes no different from what it does in Defence Colony or Saket. When on the highway, why not try the highway stuff and keep alive this distinctive cuisine?

But I have a sneaking feeling that Mr Gadkari and NHAI are of a different bent of mind. Because the new fangled toll roads, expressways and super highways are killing the traditional dhaba. With these roads being made for the prime purpose of extorting as much money as possible from the hapless motorist, access to them is tightly controlled and it is no longer possible for dhabas to spring up along them.

At the most, space is ear-marked for one or two "plazas" every hundred kms or so, but these are auctioned to the highest bidder, which can only be chains with deep pockets. They serve the same stereotyped bilge they dish out in the cities but at even higher prices since now they have a literally captive clientle. So, regardless of which end of the alimentary canal is crying out for your attention, you have no option but to stop at these joints and get ripped off.

On the Yamuna Expressway there are only two such plazas between Delhi and Agra, on the Eastern Peripheral there is not a single one between Rai and the Ghaziabad/ Ghazipur exit. Ditto for the Western Peripheral.

These toll roads are featureless conveyor belts intended to transport us from one end to the other in the quickest possible time like motorised sausages. Their specs have no place for the romance of travel, for the typical highway cuisine, for the choice between a tandoori paratha and a genuine " tadka dal. "

The dhaba may, in another decade or so, go the way of A.H.Wheeler in our railway stations. But of course we'll be shaving an hour off the travelling time and that's what matters, doesn't it? 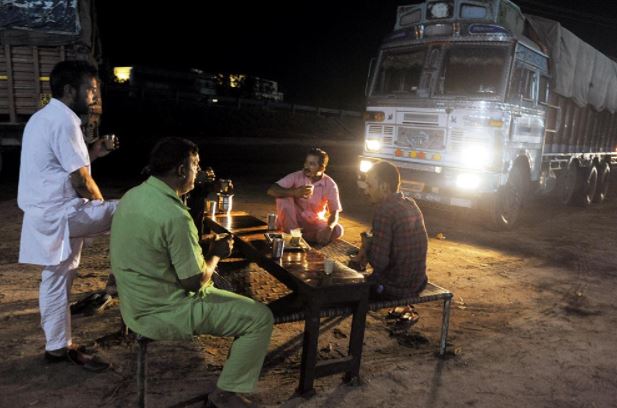