‘There Is No Alternative’

Mythology forms a large part of the current dispensations world view , and the TINA (There Is No Alternative ) myth is an important part of it. TINA is, predictably, the last refuge of the government's supporters who have now run out of money, oxygen, jobs, Remdesiver, vaccines, doctored statistics and hollow excuses to shore up their claim to continuing in power.

This is, however, as much of a fairy tale as the claims of Baba Ramdev and the sermons of Saint Jaggi of encroached tribal lands fame. Incidentally, here's something most of us are probably not aware of: TINA was not coined as a political acronym but as an economic one.

It is famously ascribed to the supporters of Margaret Thatcher's market capitalism, when she started dismantling the socialist structure of the UK economy: There is no alternative to market reforms, they said, hence TINA. The pandemic, of course, has revealed how wrong the Thatcherites and Reaganites were, just as it is now exposing how wrong the BJP acolytes are in repeating it ad-nauseam, albeit in a political context.

The first, and obvious response to the TINA argument is: any alternative is better than the present dispensation. Because, in these seven years, the entire edifice of the country has been dismantled and the gains of the last seventy years frittered away. In just about every internationally accepted parameter of good governance and economics the decline has been precipitous; here are some of the most recent global rankings of India:

Every single indicator has declined since 2014. And it would not be correct to blame the pandemic alone for this consistent decline, for the slide had started in 2016 itself. Add to all this the shrinking of the economy by 7.3% in 2020, the highest unemployment rate in 45 years, the 200 million people pushed below the poverty line, the 32 million who have exited the middle class.

I am not even going to speak about the social unrest, the gutted institutions, the collapse of federalism, the handling of the pandemic, our relegation to a " partly free democracy " by respected international monitors, for these are well known. We cannot do any worse, no matter which alternative regime comes to power at the center. As a democracy, at least.

Secondly, democracies are not suited for self- anointed "strong men" who take pride in being obstinate, contemptuous of science and learning, feel they are omnipotent and omniscient, do not tolerate dissent or criticism, and are insensitive to public opinion. Their macho image does initially appeal to the electorate, and they perpetuate it by creating a constant churn, keeping the populace unsettled, stoking all kinds of fears and imagined threats.

An apprehensive populace then looks for a "strong" leader to protect them, an instinct handed down to us from our monkey ancestors. We look for the "alpha male" to protect the clan, and who better than the Superman or Homo Deus we mistakenly elected ? It is this basic humanoid trait that autocrats exploit to rule, but its downsides soon become apparent and the disillusionment sets in.

Of the world's four larger-than-life leaders in democratic countries - all in this alpha male mode- two have been consigned to history- Trump and Netanyahu-, one ( Bolsanaro of Brazil ) has reached the end game of his rule , only Mr. Modi is still ensconced in power. In those three countries also the TINA factor was trotted out by supporters, to be proved wrong in the face of disastrous governance. It's not certain that India will buck this global trend in 2024.

The next specious argument advanced by the TINA supporters is the " After me, the deluge" chestnut, viz. that Mr. Modi is indispensable, that without him there would be complete chaos, a balkanisation of the country, a threat to our borders. The opposite, in fact, is true.

This government has already handed over thousands of sq. kms of territory in Ladakh to the Chinese with barely a whimper. We are at loggerheads with all our immediate neighbours, and now even Nepal has raised a border dispute with us! The federal structure of the country today is under unprecedented strain, with the Center refusing to accept that under the Constitution we are a union of states, in which the latter are equal partners.

The latest confrontation over the Chief Secretary of Bengal has opened another dangerous chapter in the usurpation of powers of the states- the brazen attempt to convert the very character and charter of the All India Services ( the IAS, IPS and Indian Forest Service). These services are unique, they are the only civil services in the world that have been given a constitutional status , with dual and pari-passu control by the Center and the states.

Sardar Patel's vision was that they would act as a bridge between the Union and State governments, as a unifying force between the states. And this vision has worked very well for the last 70 years. Even at times of political differences between Delhi and the states, the respective bureaucracies have ensured that coordination between the two was maintained and the system has worked.

No more, however : increasingly, Mr. Modi's over arching and autocratic government is trying to establish exclusive and over-riding control over these services. This can only be a recipe for balkanisation and the last nail in the coffin of the federal character of the country.

India does not need a " strong" central government on a constant overdose of steroids, it needs one which cooperates with the states and is sensitive to their concerns, one which provides leadership through consultations and mutual respect for the Opposition, not through midnight diktats based on pique and vindictiveness. In fact, what suits our country best is a coalition government at the Center, not a single party one with a brute majority which can be misused. The country's governance has suffered both times a single party has come to power with its own over-whelming majority - Rajiv Gandhi in 1984 and Mr. Modi in 2016/2019.

The most productive and successful regimes in the last thirty years have all been coalition governments- those of Narasimha Rao, Atal Bihari Vajpayee and Manmohan Singh in UPA-1. All three governments did well by the country in every important sphere- economy, welfare, environment, center-state relations, human rights of the people, social integration, even external relations. By contrast, Mr. Modi's majority government has been an unmitigated disaster; even worse, it has undone a lot of the good work of the previous dispensations and set the country back by decades.

It cannot be denied that no single political party can provide a national alternative to the BJP. The only one which could have done so - the Congress - is in self-destruct mode and will take a long time, if ever, to come in from the cold. The answer to TINA is a coalition of strong regional parties. Only a coalition can work in a country with 29 states, 22 languages ( as per the Eighth schedule of the Constitution), 19500 other languages, 6 major religions ( not counting the faiths professed by 6 million tribals). In one respect at least India is a unique global miracle- as Ramchandra Guha has pointed out in INDIA AFTER GANDHI, all other countries are based on, and defined on the basis of, their ethnicity, religion or language. India is the only major nation which is defined by multi-ethnic, multi-lingual and multi-religious values.

This diversity in one nation is indeed nothing less than a miracle. And that is why only a multi-party government- a COALITION government- can do justice to this diversity. No one political formation can capture, and serve, the splendour of this diverse civilisation. A coalition of parties also provides the checks and balances, the regional voices, the representation to diverse interests without which a democracy cannot function. It provides strength, not weakness.

It can work ( it has in the past) if only these regional satraps can recognise the common enemy and subjugate their individual egos and agendas for a larger national good. If the voter can free himself from the web of lies, false promises, majoritarian paranoia and the mirage of religio- cultural domination. The choice exists and it is for us to grab it with both hands. If we still refuse to see the writing on the wall then one will have to agree with Ernest Hemingway:

" And in the end the age was handed
The sort of shit that it demanded." 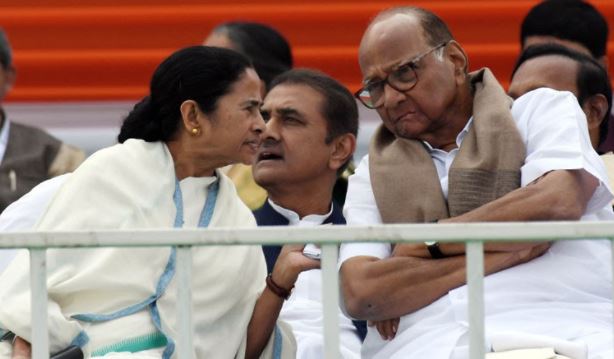