An Extraordinary Passing Out Parade

The month of June in Northern India is well known for its heat and dust. The enervating climate tends to sap one’s energy. However, Dehradun, nestled in the foothills of the Shivalik Ranges was not so bad back in the early Sixties. Global warming had not been heard of in that era and the hill effect did wonders in keeping the temperatures down.

Not that it would have affected the enthusiasm of the Gentlemen Cadets (GC’s) of the 27th and associated Courses that was scheduled to pass out of the portals of the Indian Military Academy (IMA) on Saturday June 11 1961. Rehearsals for the Passing Out Parade (POP), the biggest and most important event in the busy calendar of every term of six months duration, had started in late April and their frequency and intensity was increasing as the big day approached.

Much was happening off the drill square too. Anticipation and despondency jostled for space in everyone’s mind and could be palpably felt. Everyone was ruminating about how he had fared; where one stood in the merit; and was one getting the regiment of one’s choice.

There was great speculation about who will receive the sword of honour from the reviewing officer and the instructors were not telling! Above all, there was the nagging doubt about the post-POP life when the shoulders would bend slightly with the weight (!) of the lone star of a second lieutenant or a ‘one pip wonder’ as was the colloquial expression.

Yet there was pride at one’s achievement of having reached so far despite the tough training and many ups and downs.

The reader may well ask what was so special about this particular course, as many earlier courses had passed out before us and many more would do so in subsequent years. There were many reasons, but mention of just two would suffice. The first was the worsening security situation on the northern borders.

The earlier Hindi-Chini-Bhai-Bhai phase had ended and we could sense that we would inevitably get involved in active operations sooner than later. This was in fact welcome as we had been trained for war fighting and here was an opportunity to prove ourselves. We were far too naïve to understand the adverse repercussions of a war, but in our hearts of hearts there was that nagging suspicion of what we call the ‘fear of the unknown’ in the army.

We had no inkling about the second reason, as it was still in the future. It emerged later, on the day of the actual POP and thereafter we were known throughout the army as the course which never entered the hallowed precincts of the Chetwode Hall during their passing out parade! I am perhaps running ahead of my narrative as this was an event neither anticipated nor planned for. The reality sometimes surprises even the army, which is well known for covering all contingencies. To the best of my knowledge, this has not been repeated.

Many of our course mates did fight in the Conflict with China in 1962 and many sacrificed their lives and limbs up in the formidable Himalayas. The Conflict was undoubtedly a debacle for the nation and the Indian Army but individual soldiers and officers fought bravely and our course mates lead from the front in many areas. Prior to this, some of us were blooded in Operation Vijay, when the military was tasked to get rid of the Portuguese by force of arms in their three enclaves of Goa, Daman and Diu.

Ours was also the first course that had been split in two parts in our living accommodation, as some of us were located at Clement Town, while the bulk were at Prem Nagar, the traditional abode of IMA since its inception. I was one of those whose company (Naushera), along with two others, Kohima and Meiktila, which comprised our battalion, was located at Clement Town, in temporary accommodation, while the rest of our course mates were ensconced at Prem Nagar.

One drawback for us was that for all POP rehearsals, we had to get up earlier than usual and travel in open trucks to Prem Nagar while our colleagues enjoyed the luxury of an extra 30 minutes of sleep, as they did not have to commute. You may well ask – why open trucks? The reason was that we had to travel standing up so as not to spoil the creases of our starched trousers, lest we present a slovenly appearance and face the ire of the formidable drill instructors!

Eventually the big day came and we were turned out in our best uniforms. We formed up for the parade in our respective company formations, turned out in our best uniforms, with all brass items shining to perfection and boots and belts polished as never before. The parade commander, V P Singh, a great horseman and polo player, took his position and we waited for the Reviewing Officer to arrive.

The parade was being reviewed by Lt Gen LP (Bogey) Sen, GOC-in-C Eastern Command, a highly decorated and a very well-regarded military leader till then (His book ‘Slender was the Thread’ about the Kashmir War of 1947-48, covers his exploits when his brigade threw the Pakistanis back on the Uri Axis; but alas he was far too laid back in 1962 when China attacked in then NEFA and pro-active leadership was needed).

The spectator stands in front of us were full with senior military officers, parents of those passing out, other relatives and friends and even sweethearts of some GC’s. Although we were standing unmoving, we did savour the colour and oomph before us, at least for a few minutes, knowing well that we would be fully engrossed with the parade as soon as the reviewing officer arrived.

The reviewing officer, with the stick orderlies preceding his entry, and the buglers sounding the fanfare took his position on the dais, along with the commandant Brigadier Nanavati (later as a major general he was in the ill-fated helicopter that crashed near Poonch and we lost five very senior and upcoming Generals).

While the parade commander was reporting the parade to the reviewing officer, we heard the first ominous sound of thunder. Everyone muttered under his breath that even the Gods had taken cognisance of the big day. However, such euphoria was short-lived as it started pouring as soon as the reviewing officer commenced his inspection. The gabardine service dress of General Sen was soon soaked as were our uniforms, but not a soul moved or wiped the raindrops; our drill instructors must have been delighted, if not thrilled! 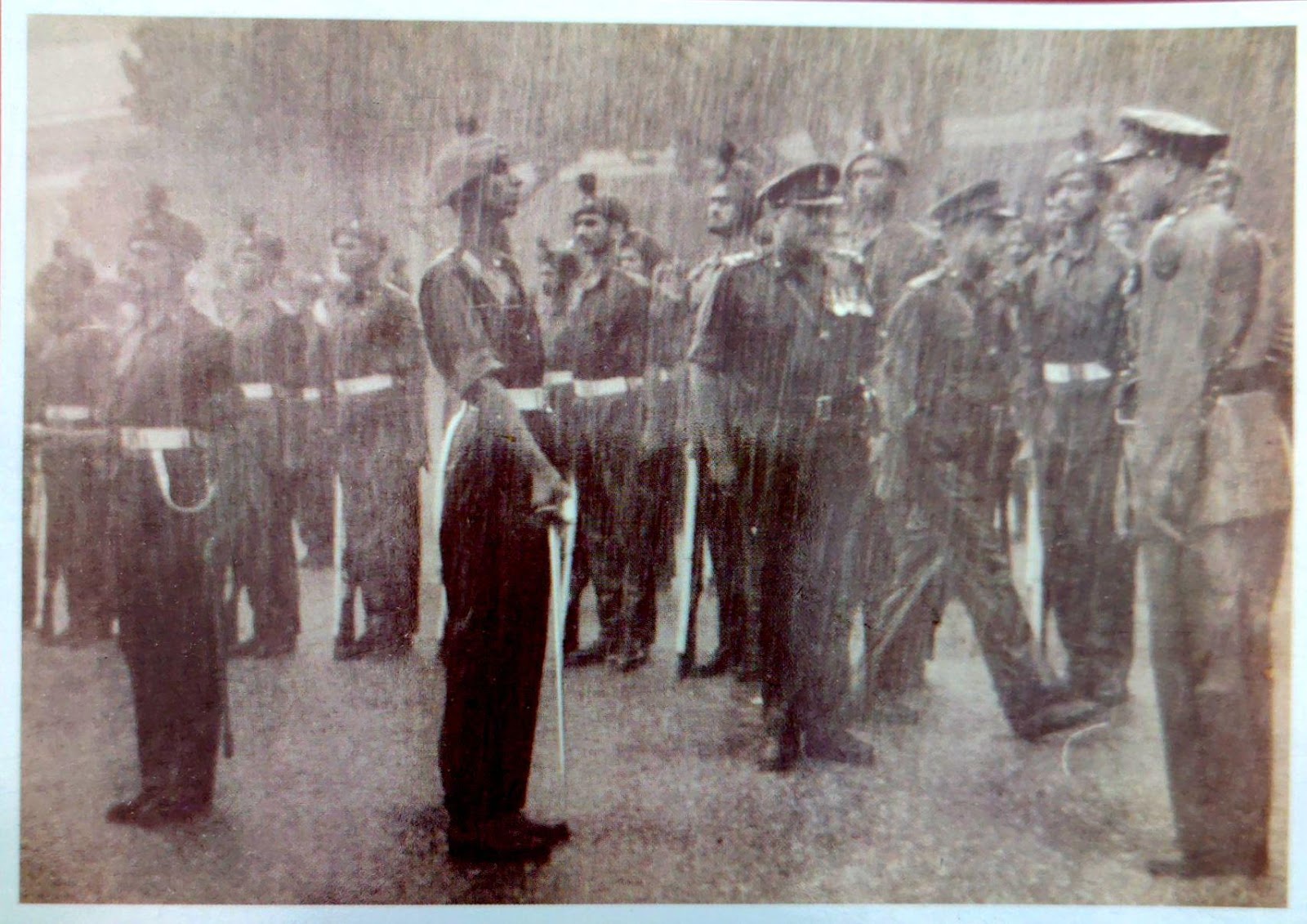 End of Inspection by the Reviewing Officer

The parade was then called off and we were marched out of the drill square in our sloshing drill boots, without taking that final step (called Antim Pag now) through the central door of the Chetwode Hall. We did become officers of the Indian Army, but felt we had missed out on something special! Other formalities of the POP, including the Pipping Ceremony, were rescheduled.

I must add that our not taking the ‘Antim Kadam’ or getting soaked in the rain had no adverse repercussions on our collective and individual fortunes in later years, as our course did splendidly in the future wars of the nation. During the 1965 War with Pakistan, Capt Chandra Narain Singh of 2 Garhwal Rifles was awarded the Maha Vir Chakra (MVC) posthumously, while Maj Manjit Singh Dugal, Artillery and Ganapathy Anjaparavand Thimaiah, 6 Sikh Light Infantry had won Vir Chakras in the same war. Earlier, 2nd Lts SD Goswamy, Artillery and SN Tandon, 4 Garhwal Rifles had won Vir Chakras in the 1962 War with China.

Our course was also well known for the very large number of flag rank officers it produced! For those who like statistics, ours was the best course to pass out for many years! As an example, when the Promotion Board from Major General to Lt General for the General Cadre was held, all ten contenders were selected and became lt gens in due course. This was in addition to those who were promoted in the non general cadre list, as well as in the Technical Graduates list.

On June 11 2021, when we would reminiscence of the 60 years of that day and the extraordinary POP of ours, albeit virtually, we will also remember our comrades who are no more, having reached their Happy Hunting Grounds while serving the nation.

The bonding of our course can be appreciated by regular get-togethers we had organised over the years. The first two were in New Delhi in 1993 and 1994. The next was on 11 June 1995, when our course mate, Lt Gen Inder Verma was the Commandant of IMA.

On this occasion, we made it a point to arrange a mock POP that was ‘reviewed’ by the senior most Naval course mate while the army course mates marched swiftly but smartly and did take the last step in slow march to enter the Chetwode Hall to the strains of that haunting melody – Auld Lang Syne!

When I was the Army Commander of Western Command, I had invited all course mates of NDA and IMA for the Millennium Get Together on June 11 2000, which was well attended, as can be seen by the signatures of the attendees on the enlarged menu below.

There were other get-togethers too by chapters at various places where course mates have settled after retirement. One of the biggest was in the Tri-city (Chandigarh, Panchkula and Mohali) that brought in a large number of course mates from Northern India

The most important get-together was perhaps the Golden Jubilee of our unique POP on June 11 2011, which was organised by the Dehradun Chapter, under the leadership of Lt Gen VK Sharma, when we had the maximum participation. We had gathered at Dehradun, along with our wives, children and even grandchildren, as one can see in the two group photographs.

As we end the ‘virtual’ Diamond Jubilee celebrations, we need to continue to look forward to future events, keeping in mind the old adage “hope sustains life”. What better to look forward to than another round of sharing experiences, including the aches and pains of the advancing years; after all, ‘virtual meetings’ are now part of life!

Let me end by a quote from Vivian Y Laramore, which goes thus:

“I have shut the door on yesterday
And thrown the key away, t
Tomorrow hold no fears for me,
Since I have found today.