The Farmers’ agitation starting November 26 2020, was against three Farm Laws. The Essential Commodities Amendment Act, 2020, (ECA Act) is one of them.

ECA Act amends the Essential Commodities Act, 1955, (EC Act) enacted “in the interest of the general public, for the control of the production, supply and distribution of, and trade and commerce”, and more precisely, “for controlling the rise in prices or preventing the hoarding of any food-stuff”.

The “general public” envisaged in the 1955 EC Act is every person who purchases food to eat, noting that farmers are also food consumers and members of the general public. Rise in food prices not only affects the lowest economic sections but also the lower middle class, together over 80% of our population.

Between the food-producing farmer at the start of the food chain and the consumer at the end of the food chain, is the “market” – credit-providers (moneylenders and banks), traders, stockists, wholesalers and retailers. The food price paid by a consumer depends not only upon how the market operates, but also upon how the government regulates it in the public interest.

Hoarding agri-produce for profiteering has been there for decades. Knowing this, the government enacted the 1955 EC Act, to protect the public from hoarders. It regulated seven essential commodities, especially foodstuffs, including edible oilseeds and oils, in times when India was importing food, because of insufficient food production and widespread hunger.

In the decades since then, although India’s food production has increased manifold, so has its population. Hunger and malnutrition are still realities for a majority of our population, mainly because of rising food costs.

The ECA Act removes cereals, pulses, oilseeds, edible oils, onion and potatoes, from the list of essential commodities. However, Section 2 of ECA Act amends Section 3 of the EC Act, permitting regulation of foodstuffs (cereals, pulses, potato, onions, edible oilseeds and oils),“only under extraordinary circumstances which may include war, famine, extraordinary price rise and natural calamity of grave nature”. The central government decides and declares one of the four circumstances.

War is undoubtedly an extraordinary circumstance. However, declaring famine is a political issue. This is demonstrated by the word “famine” being deleted from all the laws of Maharashtra, by the “Maharashtra Deletion of the Term "famine" (From Laws applicable to the State) Act, 1963”, thus ending famine forever, without providing even one kilogram of food for any person in Maharashtra. Thus, it is more than likely that for political reasons, the central government will never invoke ‘famine’ as an extraordinary circumstance of the ECA Act.

The on-going Covid crisis began in January 2020, and rapidly developed into a grave national calamity due to natural causes. Yet, the Essential Commodities (Amendment) Ordinance, 2020, was promulgated in June 2020, and the ECA Act 2020, received the assent of the President in September 2020, both well into the natural calamity of the Covid crisis. Thus, it is certain that the government will not invoke the extraordinary circumstance of ‘natural calamity’.

That leaves the extraordinary circumstance of “extraordinary price rise” that may justify imposition of limits. A whole subsection in ECA Act Section 2 is dedicated to stating what “trigger” of retail price rise is considered “extraordinary”: For Horticultural produce, 100% increase, and for Non-perishable agri-foodstuffs, 50% increase, “over the price prevailing immediately preceding twelve months, or average retail price of last five years, whichever is lower”.

The corporations which control the market can avoid the government imposing stocking limits, by raising prices without exceeding the trigger retail price.

Effectively, ECA Act deregulates foodstuffs including cereals, etc., leaving traders and stockists free to increase inventory (aka hoarding) and control the wholesale and retail market price of food for consumers. Those with the largest capital and storage/transportation infrastructure will profit the most, through consumers paying more for their food.

Wholesale traders and stockists in Karnataka have raised the retail tur price from Rs.100/kg to Rs.125/kg, and 5-ltrs sunflower oil from Rs.680 to Rs.800. This 20-25% increase is rightfully cause for concern to the Government of Karnataka (GoK). Although the ECA Act trigger for these items is 50%, GoK has sought Centre’s approval to impose stocking limits of some food commodities, to prevent hoarding and artificial price rise.

GoK may have inadvertently exposed the pro-corporate and anti-public bias of the ECA Act. Will the central government accept this price rise as extraordinary? Watch this space!

Almost 90% of India’s farmers are small farmers. They cannot store harvest for want of storage space, leave alone stocking it. The ECA Act does nothing for them. They have to sell as soon as possible, to repay the loans taken to begin farming operations, and usually sell to the trader (often a creditor) who comes to the farm-gate.

They get a price far below government-declared MSP. They have no physical or financial means to transport produce to a distant market for sale, so farm-gate sale is the best bet. Their pathetic financial and economic situation works to their disadvantage and to the advantage of traders and stockists. This is the ground reality.

Medium and big farmers, themselves sometimes also traders and credit-providers to small farmers, have both storage space and financial cushion to hold harvest until they can get a good price. It is the wholesale traders and stockists who benefit from ECA Act, because they buy cheaply – including farm-gate purchase from small farmers – and hold or hoard stocks to influence food grains price in the market.

Thus, ECA Act favours wealthy traders/stockists, does nothing for small farmers, and hits the retail urban and rural consumer by price rise.

Farmers demand MSP to be guaranteed by law, with MSP computed per the Swaminathan Commission recommendation, and combined with assured procurement. One without the other would have little meaning.

Farmers demand legal guarantees of MSP because of the constraints of farm-gate sale, and governments’ reluctance to procure at MSP. The latter reason is substantiated by a recent report from Telengana.

The Telengana government ignored the distress of farmers of Adilabad and Kamareddy Districts unable to sell their harvest of 4.5-lakh quintals of jowar at Rs.1,000/quintal offered by traders, when MSP was Rs.2,620/quintal.

The unsold harvest was rotting due to rains, since farmers had no storage. When Telengana government continued to ignore farmers’ protests and suicides, Rythu Swarajya Vedika (RSV) filed a PIL on 01 Jun 2021 before Hon’ble High Court.

On June 9, the CJ expressed “extreme displeasure” at government’s inaction and ordered purchase of jowar at MSP. In the meanwhile, distressed farmers suffered harvest loss and face produce-rejection due to deterioration caused by the government's inexcusable delay in procurement.

The High Court ordered the Telengana government to procure at MSP from farmers following their suffering and losses, and weeks-long protests, based upon public interest litigation. It shows the government as callous and uncaring of the public interest, because it is duty-bound to ensure that the farmers are not compelled to sell their produce below MSP. Who will compensate farmers for their distress, and how can government bring back a farmer who committed suicide, because of government’s inaction?

Governments avoid procurement at MSP because they are “influenced” by the deep pockets of stockists and traders who reap huge profits from buying agri-products cheaply, and stocking without limit to control the market. The link between the Central government’s reluctance to guarantee procurement at MSP by law, and its enacting the Ordinance and ECA Act to remove stocking limits, is obvious to all except the deliberately blind.

Some issues arise incomputing COP and paying MSP to farmers:

# Farmers demand that COP should be Swaminathan Commission’s “C2” – complete costs – which is the sum of paid out costs, imputed value of family labour, interest foregone on the value of owned capital assets, rent paid for leased-in land, and the rental value of owned land.

# COP varies from State to State for the same agri-produce. Thus, although FCI is a central procurement agency, State governments need to compute COP, since agriculture is a State subject.

# The Swaminathan Commission listed lack of “assured and remunerative marketing“ among the causes of farmers’ distress. This is nothing but governments assuring procurement at MSP, timed with the harvest. Guaranteeing MSP by law will obviate farmers having to suffer financial and other troubles in seeking justice for their rightful due from High Courts, as in Telengana.

It is encouraging that Agriculture & Farmers Welfare Minister Tomar affirmed that the government was open for talks with farmers, regarding the agricultural reforms. However, it is difficult to understand his saying, “We urge farmers’ leaders to point out flaws in the three farm laws and we are ready to address their concerns”, because detailed reasons for opposing the farm laws have been made public, and farmers’ leaders would have given them during their 11 meetings with government.

The Farmers’ agitation against the three Farm Laws continues past the 200-days mark. The stand-off between farmers determined for a long haul, and an obdurate central government, continues. Meanwhile, the farmer-consumer ramifications of the ECA Act and MSP argued above, bear consideration.

Major General S.G.Vombatkere is retired from the Indian Army. 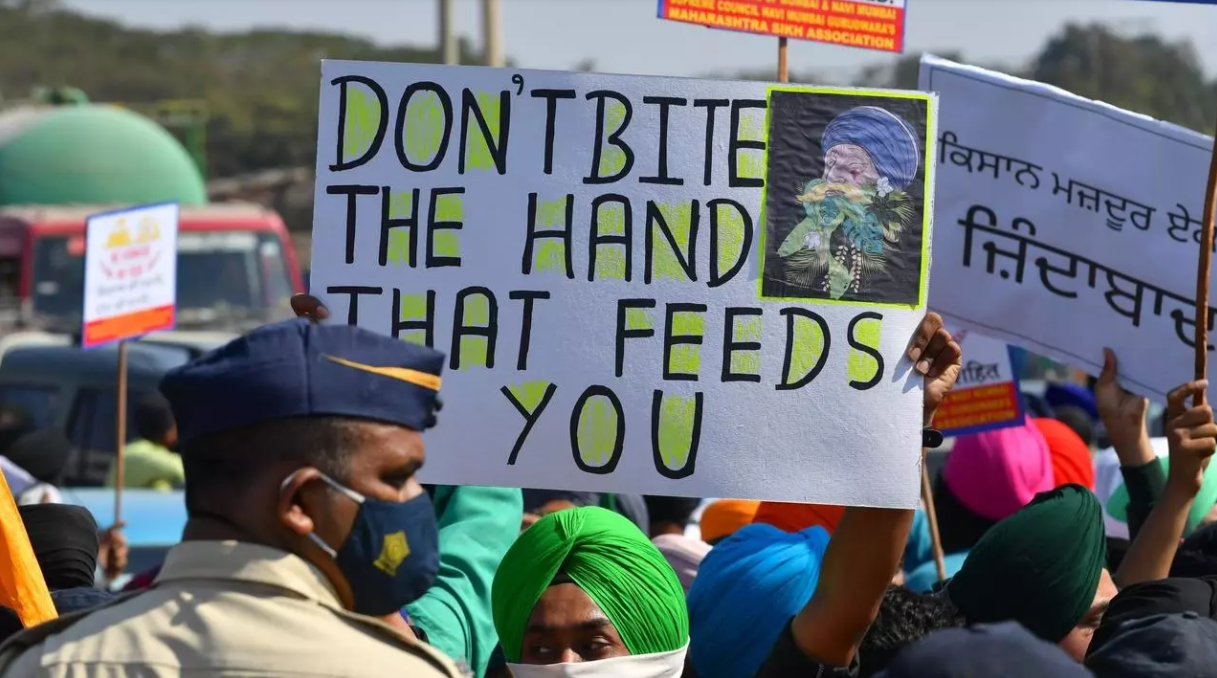 Major General S.G. Vombatkere, VSM, retired in 1996 as Additional DG Discipline & Vigilance in Army HQ AG's Branch. He holds a PhD degree in Structural Dynamics from I.I.T, Madras. He is Adjunct Associate Professor of the University of Iowa, USA, in international studies. With over 450 published papers in national and international journals and seminars, his current area of interest is strategic and development-related issues.