The Future for J&K Remains Uncertain

The Future for J&K Remains Uncertain

In the heyday of Mughal India, a very presence in the Diwan-i-Khas was an affirmation of fealty to the Badshah and to the Mughal durbar. But Delhi in the 21st century is not the Delhi of the 17th. So we Indians of today are left mulling the meaning of the durbar of June 24, when a gracious Prime Minister, seconded by his formidable Home Minister presided over a meeting of an invited spectrum of political leaders from Jammu and Kashmir.

This array of leaders, said to comprise the entire ragtag and bobtail of Union Territory J&K’s mainstream, included those that had wide demonstrable support in parts of the state, attested to by recent actively contested elections and also included those with none at all.

This is exhibited, if exhibits were needed, in a posed photo of the participants after the meeting, in which some photographed look overjoyed, while others look decidedly glum. But sadly, what remains an enigma is the purpose or outcome of this vaunted exercise.

Reportage of the meeting, both of events leading upto it and its conclusion, has been wide. Grave thought from wise analysts has been voiced and conjecture debated. Post meeting comments of one or the other of the participants, many of whom, including former Chief Ministers amongst whom was Kashmir’s tallest leader, who had suffered from a denial of any legal recourse for months after J&K had lost its statehood, only added grist to the mill.

The statements to the media by participants and authorities thereafter demonstrated only that nobody seemed to have a clue, because, from first-hand accounts, it appears that at no stage did the mandarins declare their hand but only probed the invitees for their views, which were random.

As one respected commentator has written, “the scrutiny of the Modi government’s use of coercive instruments to enforce peace and stability in the troubled region has been under greater and adverse international scrutiny. The Joe Biden administration’s emphasis on upholding democratic values and human rights in its external relations has put the Indian government under mounting political pressure. Both the revival of the ceasefire at the LoC and the attempt to bring about a degree of political normalcy in the Valley may be seen as a deflecting response to these external pressures.”

Was this then simply a Photo Op to allay criticism, or indeed the first step in restoring democracy in J&K?

What emerges is a game of musical chairs on sequencing completion of the exercise of delimitation, now fitfully under way, the holding of elections and the restoration of Statehood-in the last of which the inclusion of Ladakh to the truncated State finds no mention. Assertions have been made to the media that one or the other of the political leadership will or will not allow one to precede the other.

Mehboob Mufti plaintively appealed for a restoration of freedom of the individual’s rights before the state could move forward in any direction, in which she had little hope. Was there any talk of restoration of the total absence of trust, without which it will be clear even to the layman that there can be no political progress whatever let alone towards democratic operation? The discussion did not even address the issue of restoration of the State’s special status, whenever statehood is restored

Fortunately there appears to be consensus on revised delimitation of Constituencies. In the Union Territory of J&K there are 5 parliamentary constituencies, three in the Kashmir Division, two in Jammu. Whereas the first is predominantly Kashmiri Muslim, the second has a majority Hindu but with a substantial and ethnically diverse Muslim population Kashmiri, Pahari and Gujjar, the latter being listed as Scheduled Tribe (ST).

Ironically, the highest population growth rate is in the conflict inflicted districts of Kashmir Division with Anantnag district recording a 38.58 % decadal growth in the last census followed by Ganderbal with 36.50%, then Kupwara in the northwest, followed by the Muslim majority districts of Jammu Division. The largest extant district in population is indeed Jammu, winter capital of the UT, but then follow in succession Srinagar, Anantnag and Baramulla followed closely by Kupwara and Budgam, all within fast growing Kashmir Division.

The population of J&K State was according to the 2011 census 68.31 % Muslim and 28.47 % Hindu, which proportion will hold for the UT. And although this figure is almost identical to the balance post-independence, in 1981 the demographic distribution had stood at 64.19% Muslim and 32.24 % Hindu.

The investment of Sheikh Abdullah’s government in public health and education in the ‘70s and early ‘80s in Kashmir is what brought the turnaround in health and life expectancy amongst Kashmiris earlier among the poorer of J&K’s communities, ridden with infant mortality. Before it's revocation of statehood, J&K enjoyed the lowest poverty line of any state in India.

So what is it that a review of delimitation expects to achieve? Redistribution on the basis of population? Kashmir is a slim densely populated Valley with settlements now scaling rivers and crag up ridges and mountainsides and hence stands to benefit most from such exercise.

If the criterion is to be size, the hill areas of Jammu located in the Pir Panjal foothills of the mighty Himalayas, all primarily Muslim would gain, as it would from consideration of connectivity. A reasoned and fair delimitation can ensure that every section of the J&K citizenry finds representation in proportion to its size.

If this is indeed what the meeting of June 24 has achieved, it will then have had a purpose and indeed a modest success. But the support for delimitation had been voiced sometime ago by Dr Farooq Abdullah. The difficulty arose from the Delimitation Commission, with offices in Delhi, remaining inaccessible to the Kashmiri public. Hopefully, following on the meeting this will now be remedied with the Commission holding open sessions in the UT.

Nevertheless, the critical issue that has led to the greatest resentment amongst the people of J&K is the failure of constitutional mechanisms safeguarding India’s democracy from addressing issues of their concern. With the summary abrogation of Article 370, which defined the standing of J&K in India without any substitute, the constitutional standing of Indians in J&K became indeterminate. This only buttressed the mutterings of “we-told-you-so”s.

June 24, therefore, came nowhere near addressing real issues. It is only by addressing them that we as a nation can win back the confidence of our citizens in what had been the State of J&K, as equal partners in the evolution of the vibrant democracy that is India. 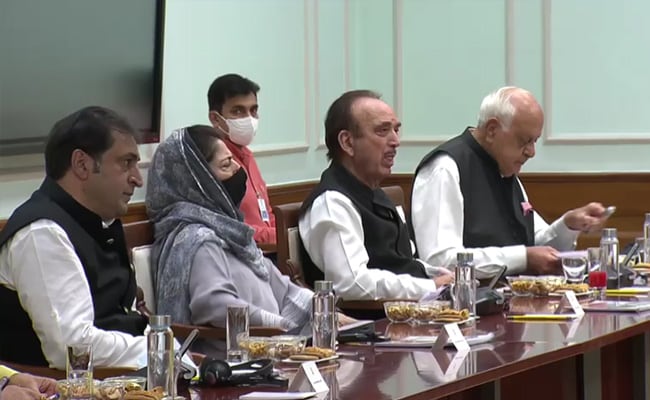 Wajahat Habibullah was the chairperson of the National Commission for Minorities. He was earlier the first Chief Information Commissioner of India and Secretary to the Government of India in the Ministry of Panchayati Raj (Local Government).