‘Owner of the land is also the owner of sub-soil minerals.’

Amidst the outpouring of national and international grief, anger, anguish and condemnation of the ‘institutional murder’ of the 84 year old Jesuit priest Stanislaus Lourduswamy, Stan Swamy, some RSS affiliated ‘intellectuals’ are spreading venom that he was a ‘revolutionary Marxist’ and a preacher of violence against the state.

In support they are drawing on ‘liberation theology’, which according to them is a product of the Roman Catholic Church. To them this theology is ‘profoundly anti-capitalist, anti-markets and justifies violence, using selective quotations from the gospels’.

Father Stan Swamy belongs to the Society of Jesus, Jesuits, the prime religious congregation of the Catholic religion. RSS busybodies allege that because of a ‘liberation theology’ orientation among Jesuits many of them are well disposed to Maoist insurgents, while publicly donning the robes of supporters, helpers and padrones of the supposedly helpless tribal people.

They argue that the influence of the Marxist Latin American liberation theologists has deeply permeated the Catholic Church in India and has impacted the Jesuit order quite profoundly over the last few decades. Their logic is that since Stan Swamy was a Jesuit, he is a proponent of ‘liberation theology’ which promotes tribal insurgency and not welfare!

What a convoluted and hate-filled logic. And to boot some of these worthies, particularly one Jaithirth Rao, claim to have studied in ‘reputed’ Jesuit colleges and have been interacting with ‘older, kinder, more sober, more sensible Jesuits’ who oppose this ‘violent’ liberation theology.

How hare-brained and preposterous can one be?

Let us see the simple definition of ‘liberation theology’. It is a religious movement arising in late 20th-century Roman Catholicism and centred in Latin America. It sought to apply religious faith by aiding the poor and oppressed through involvement in political and civic affairs.

What is wrong with this? Is this not what Jesus Christ himself preached and what Jesuits, who are in the vanguard of Catholicism, are supposed to practice?

Among all the theologies, dogmas and tenets which Catholicism is full of, to me this passage from the Holy Bible forms the essence of Christ’s teachings. Describing the Last Judgement, Jesus tells his disciples:

“Then the king will say to those on his right hand, come, blessed of my Father, take possession of the Kingdom prepared for you from the foundation of the World; for I was hungry and you gave me to eat; I was thirsty and you gave me to drink; I was a stranger and you took me in naked and you covered me; sick and you visited me; I was in prison and you came to me…!

It is this teaching of Christ that launched the massive international infrastructure of love, care and compassion built by the diminutive Mother (Saint) Teresa, of the Missionaries of Charity, whom I had the rare honour of knowing and serving. To her, serving the least of our brethren is the true service to God. And in the Indian context, who could be the least of our brethren but the poor, scantily clad tribal people?

And it is among them that Fr Stan Swamy worked for thirty years. Hailing from Trichy in Tamil Nadu, Stan studied theology and did a Masters in sociology at the University of Manila and had advanced education in Belgium. He was director of the prestigious Indian Social Institute at Bangalore for fifteen years. But his work among the poor Jharkhand tribals of the state kept calling to Swamy, and he came back to take up work among them.

Tribals in India are the worst victims of the corporate driven ‘predatory and repressive development’ agenda and state terror unleashed to implement this agenda. It mainly concerns grabbing millions of acres of forest land that have mining and other resources needed for this predatory development.

As tribal lands were forcibly taken away, Stan started a movement seeking implementation of a Supreme Court order which said, ‘Owner of the land is also the owner of sub-soil minerals.’ He also opposed the setting up of ‘land banks’ to facilitate big industries to gobble-up tribal land.

This made him fall foul of the mining and business barons who have a stranglehold on the state’s economy and politics. Bagicha, the NGO he helped found, took up the case of Adivasi youths languishing in prison for years as ‘under-trials’. This antagonised the state and police authorities.

In 2016, Swamy did a research study titled ‘Deprived of rights over natural resources, impoverished Adivasis get prison: a study of Undertrials in Jharkhand’ and submitted it to the court.

His study found that 97 percent of undertrial ‘links’ to Maoists were based on fabrication, underlining the fact that the poorest and most vulnerable people were among the ones arrested under stringent anti-terror laws.

This study sent shivers down the spine of the tribals’ oppressors.

Stan tirelessly served for tribal upliftment and welfare by taking up issues related to their constitutional rights, land rights, forest rights, labour rights and representation of the community members in the state of Jharkhand.

In a statement given two days before the NIA took him into custody, he described his challenge to the ‘indiscriminate’ arrests of thousands of young Adivasis and Moolvasis with the investigating agencies labelling them as ‘Naxals’.

In short, Stan’s life was a crusade for the protection and upliftment of Adivasis.

For the right wing such selfless devotion and seeking of justice for the ‘least of our brethren’ is an attempt to overthrow Indian society and specifically Hindu society.

For these henchmen of corporate carpetbaggers, Tribals, the original owners of the land and forests, should meekly surrender these to oligarchs and live as subservient slaves without any sense of equity or justice. Or else the predatory state taking orders from these oligarchs will repress and suppress them through all kinds of excesses and draconian laws.

Anyone raising a voice or seeking justice would be branded a ‘violent Marxist’ and given the same treatment. What is worse, highly educated and conscientious activists like Stan would be stamped out with the combined might of the politicians, executive, police and the judiciary!

Returning to ‘liberation theology’. Fr Jon Sobrino of El Salvador is considered the author of this formative concept. He is a Jesuit who teaches at the Universidad CentroAmericana. His theological thinking in his own words is:

‘There is a reality of sin, which has structural causes and kills a majority of the population, and there is evident need to overcome this situation of death. Without doing this, theology was neither human nor Christian.

‘From here I re-thought the reign of God—as justice and fellowship—as the core of Jesus Christ. I re-thought the historical Jesus, and the following of him, including centrally his compassion towards the poor, the announcement of good news to the oppressed and the denunciation of the oppressors.

‘I insisted that for this he died on a cross, and I insisted that the risen Christ is a crucified Christ. The resurrection of Jesus was the reaction of God against the victimizers who killed the innocent.

‘From the love of the crucified and from his rehabilitation on the part of God emerges hope. I also discovered that the massive and materially poor, oppressed and repressed, despised and ignored have also hope and the capacity to save us.’

Ernesto Valiente takes this ideology towards ‘Liberation through Reconciliation’. At the heart of Valiente’s vision of the demands for authentic reconciliation is the triad of truth, justice, and forgiveness. Truth is the first step towards reconciliation. Truth necessarily demands justice. Any call for forgiveness must clearly name injustice and seek the removal of the causes of that injustice; from the other side, seeking justice means naming and confronting the oppressors.

Followers of Jesus, then, seeking the honest truth of reality and driven by compassion, must seek to build the kingdom of God which is the liberating transformation of reality by means of justice and forgiveness.

Jesuits are true followers of Jesus and it is natural therefore that they have adopted liberation theology with three pillars—truth, justice and forgiveness—as their way of serving the materially poor, oppressed and repressed, despised and ignored poor.

Indeed, such a theology is not merely for the Jesuits, but for the entire Catholic Church!

But the RSS acolytes steeped in lie, injustice and hate, who are proponents of ‘repressive and predatory development’ cannot comprehend this. Hence, they brand a martyr like Fr Stan Swamy, who followed the path of this noble theology as a violent ‘revolutionary Marxist’.

What can one say except what Jesus Christ Himself said: ‘Father Forgive Them, They Know Not What They Do.’

M.G Devashyam is a former Army and IAS Officer. He is Chairman, People-First 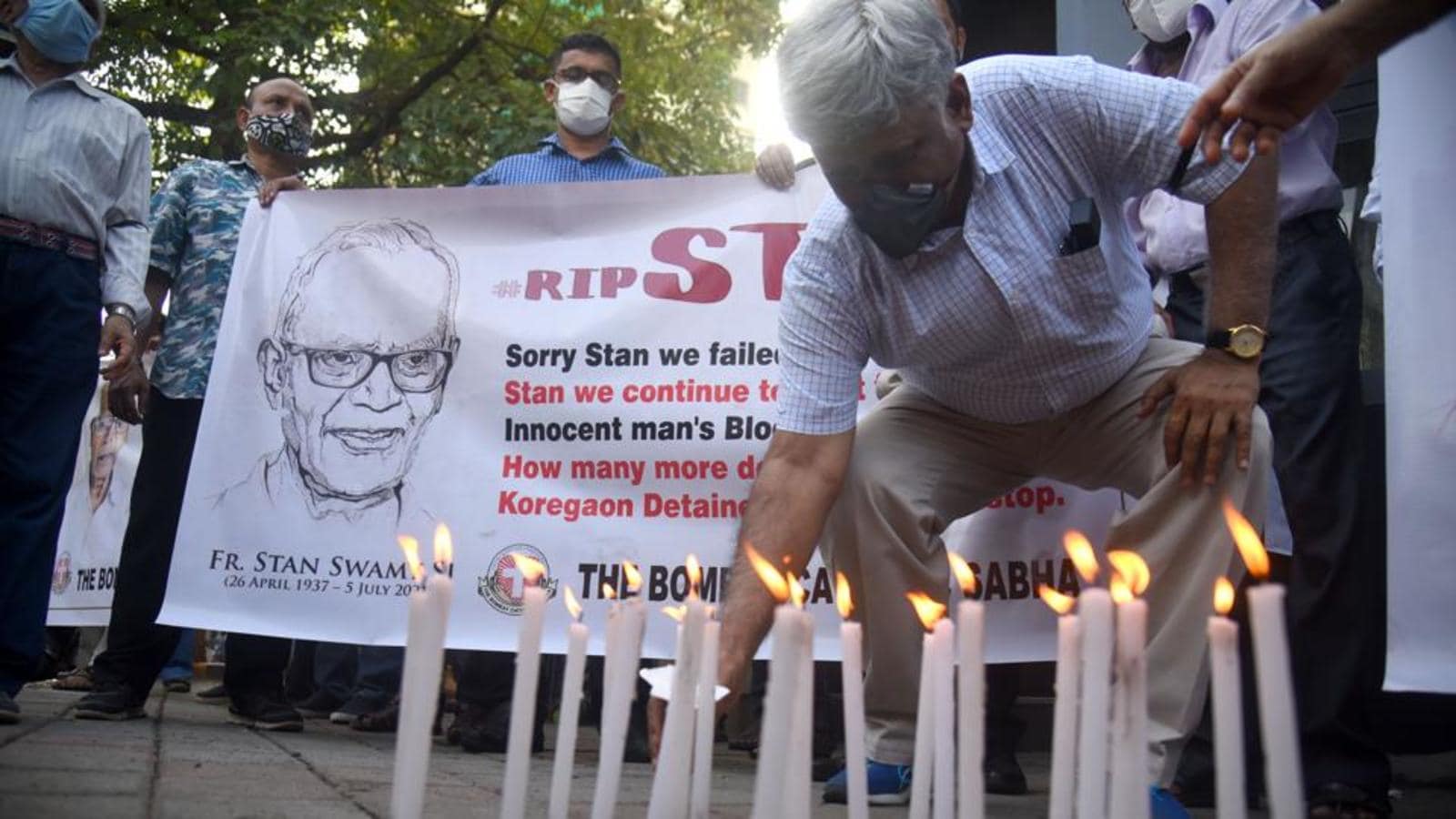