Why the Afghan Army Collapsed

First of a 2-part series

Mohib was the shadow king of Afghanistan. He controlled the country’s defence budget. In the coming year, he would have handled over $3 billion, which the US has earmarked as assistance for the Afghan armed forces. The Taliban spoiled his party.

The mystery of the Afghan armed forces losing the will to fight is actually no mystery at all. The main reason has been the misappropriation of defence budget. In Ghani’s set-up, Mohib, his trusted flunky, controlled the Defence Ministry — not the Defence Minister — and he obviously did well for himself — and probably Ghani too. Time will tell.

The soldiers seldom received their full pay as officers pocketed the money and that explained the high rate of desertion from enlisted men. Soldiers often flogged their US-supplied weapons in the black market to earn a living.

Simply put, the army lost the will to fight for a decrepit government that lacked legitimacy, was inept and indifferent to people’s needs and grievances — and a leadership it held in contempt.

The contrast with the Afghan army built by the Soviets in the early 1980s couldn’t be sharper. Najibullah held out for three years after the Soviet troop withdrawal and stepped down only when Moscow cut off all assistance — even wheat flour to make bread. The army was disciplined, well-trained and politically indoctrinated, and the officer corps trained in the Soviet military academies commanded respect.

The Battle of Jalalabad (1989) stands out as its finest hour when Pakistan masterminded a siege on the city to capture it as seat for the Mujahideen provisional government, but failed.

Over the past twenty years, the US supposedly trained the Afghan army by NATO standards, 300000 strong, but when the battle was joined in May, it began crumbling under Taliban pressure.

When corruption eats into the vitals of a nation, the state structures decompose and collapse. And when the leadership loses respect of the people, the war is lost.

At the famous Mehdi Hasan show on MSNBC today, Afghan ambassador to Washington Ms. Adela Raz said that Ghani and his cronies simply emptied the Afghan Treasury and left with the loot. The Afghan finance minister Khalid Payenda’s resignation and escape from Kabul on August 11 falls in perspective! The poor man feared the day of reckoning. He didn’t even say where he was heading.

India’s policymakers couldn’t have been unaware that a cabal was ruling Afghanistan but deliberately chose to ignore it. This is incomprehensible. India stuck out its neck as recently as last Monday to set the stage for Ghani’s government to project itself to the international audience from the UN Security Council podium. It ignored a formal request from Pakistan to participate in the UN SC discussion so that Ghani’s people had a field day!

The best hope is that no interest groups existed within the Indian establishment, as happened to the US. The Washington Post has exposed that the Pentagon commanders lied and the ‘forever war’ continued. Evidently, a gravy train was running through Kabul.

Such things happen when the covert agencies of the state stand above law. A nexus formed between Kabul bigwigs like NSA Mohib and decrepit rogue elements within the US military and they thwarted all attempts to end this war. The disconcerting fact is, in India too, a determined lobby advocated the ‘forever war’ against all logic, and Mohib was our man in Kabul, too.

Ambassador M.K.Bhadramumar is retired from the Indian Foreign Service. 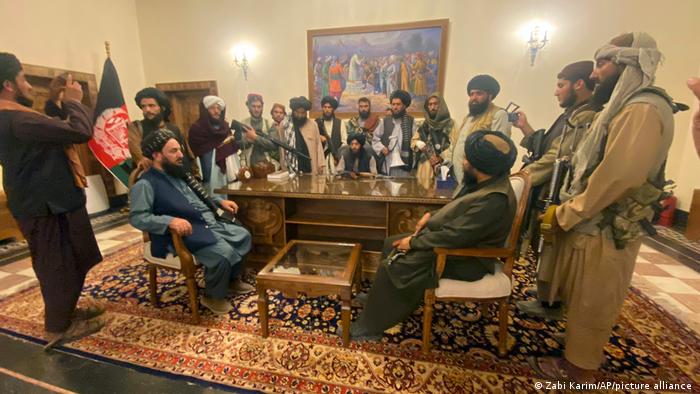 Cover Photograph: Taliban leaders posing for a photograph in the presidential palace, Kabul.