Lessons From the Commemoration Season

It is important to commemorate the sacrifices of soldiers, airmen and sailors in the nation’s wars. However, it is well known in the land of the Buddha that moderation is a value in itself. Overdoing of commemorations, as seems to be the case with periodic commemorations of conflict related anniversaries, prompts the question: ‘Why?’

For congenital cynics, there could be two answers to this. One is that there is something to hide; and second, that other aims are sought rather than the purported honouring of sacrifices.

To begin with the first, the anniversary in the offing is of the post Uri terror attack surgical strikes. The air force has been tasked to conduct air shows across the country, to include one on September 26 over Dal Lake.

The surgical strikes of late September 2016 are advertised as signifying India’s indubitable casting off of its millennium-long Panipat syndrome. It had finally acquired the decision maker in Prime Minister Narendra Modi with the gall to use military power in the avowed national interest, casting into history India’s hitherto reticence to use force symbolized by the syndrome.

Other than the undeniable derring-do depicted in the movie, Uri – The Surgical Strike, there was little to show for the strikes themselves. The strikes gained the largest number of gallantry awards for an episode, surpassed only qualitatively by those dispensed for the counter to the terror attack on parliament.

Pakistan denied the strikes, and no evidence was put out in the open domain of the damage Pakistan managed to hide to contradict Pakistan. The strategic fallout was incommensurate, since surgical strikes were repeated only a few years down the line, this time at an escalated level by using air power and targeting Balakot, within Pakistani territory.

This brings up the second purpose of overdoing commemoration: political appropriation. The following year, surgical strikes were used by the ruling party in its election campaign in the crucial state of Uttar Pradesh. The positive elections results led to the subsequent anniversary in 2018 being observed as Parakram Parv since national elections were to follow.

The halo from Balakot - despite (yet again) of lack of credible bomb damage assessments - provided political ballast enough to also cover-up loss in the aftermath of one fighter jet to enemy action and a helicopter to fraternal fire.

Currently, Mr. Modi is off to New York to address the General Assembly. He would also participate in New York in the in-person meeting at the White House of the Quadrilateral Security Dialogue partners. The jigs through the week by the Surya Kirans of the air force across India can be expected to provide a fittingly muscular backdrop to lapdog media’s coverage.

Mr. Modi’s first post-Covid foray into jhuppi diplomacy with Biden at Washington caters for messaging to China, that India is not cowed by its continuing in situ in Ladakh. The second international appearance is in the General Assembly where either in ignoring or including a word on it, Pakistan can be expected to be taken down a notch or two from exulting over its protégé, the Taliban’s taking over Kabul.

The question is whether this - not unreasonable - aim requires the commemoration as backdrop?

For professional skeptics - skepticism is taken here as a democratic virtue that helps hold governments accountable - the abuse of commemoration - defined as honouring sacrifice - is avoidable.

After a promising beginning to the year in the reiteration of a ceasefire with Pakistan along the Line of Control, there has been a backslide. The back channel that was supposedly active in the run up to that false dawn has presumably stalled.

It is unlikely to be revived any time soon since UP elections are on hand and precedence suggests a muscular approach to Pakistan proves useful as an additional ingredient in the polarizing domestic brew. Besides, in Kashmir, elections are slated for next year. This precludes any concessionary softening towards Pakistan, especially since Pakistan has required reversal of the Article 370 moves that set the stage for the upcoming elections in the union territory.

A succession of such commemorations – year-round inter-alia observances of Balakot (February), Kargil (July) and Uri (September) – serve to condition the electorate, enabling the ruling party to genuflect to the majority sentiment for remaining averse to Pakistan. Missed in this logic is that the majority will is liable to being manufactured, and in this case has been assiduously steered in a particular, self-serving direction.

The Swarnim Vijay Diwas on the resounding 1971 War victory The former is unexceptionable, being the most significant post Independence martial endeavour. Understandably, its observance includes reminiscences by veterans of respective communities of the diplomatic, intelligence and military run to the war and the military feats in it.

Additionally, alongside is also warranted a sober, self-reflection on the war.

The war’s larger aims – beyond cutting Pakistan to size - remained unmet since the military victory did not serve to settle India-Pakistan differences. The peace was lost in the lack of appropriate follow up to the promise of the peace treaty at Simla.

On the contrary, the war instead served to aggravate differences, with Pakistan - reverting to military dominance - seeking vengeance, and Indian actions in Kashmir arguably enabling it an opportunity to do so.

In effect, an unintended consequence of the 1971 War was India’s very own ‘forever war’. Clearly, a war does not end when the fighting subsides. Introspection on why the war has not ended is in order. While not discounting the well-known villainy of the Pakistani military, India must acknowledge its ownership of that war’s strategic underside.

The ongoing reminiscences inform that India meticulously set the stage for the war in year-long preparations for a war with ultimately realpolitik ends. Scholarly attention has not yet scrutinised the extent of Indian culpability for the humanitarian disaster in terms of it resulting from interference in Pakistan’s domestic affairs. As could be anticipated, it led to increased severity of the Pakistan crackdown, thereby playing into Indian hands. As for the genocide, it remains Pakistan’s cross since there are no mitigating circumstances or rationale for such atrocity crimes.

The lesson from the commemoration of wars is that it is an opportunity for truth telling, even if revisionist. Doing so does not in any way take away from the valiant deeds of participants. Critical appraisal of this negates the notion that a docile India has been at the receiving end of its neighbours’ aggressive tendencies, with the ensuing heightened self-regard opening up peace possibilities.

The importance of this goes up as the second year-long commemoration underway, Azadi Ka Amrit Utsav, moves India away from the India as envisaged 75 years back. As the 1971 War commemoration outpourings show, the make-over to a muscular New India is superfluous.

Indeed, commemoration with sobriety may instead be the more desirable manner of observing anniversaries having strategic import.

Ali Ahmed was an infantryman 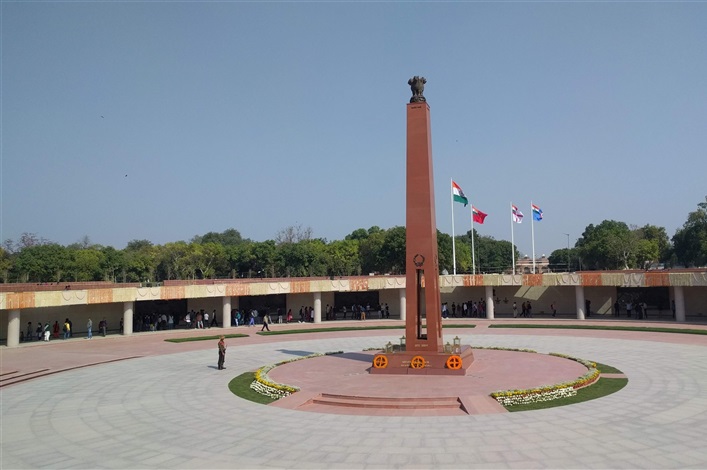