A Chinese Storm in the Brewing

After his recent visit to Ladakh, Army Chief General MM Naravane stated that the Chinese Army has deployed its troops in considerable numbers all across Eastern Ladakh and Northern front right up to our Eastern Command, adding, “Definitely, there has been an increase in their deployment in the forward areas, which remains a matter of concern for us.” But this is only half the story.

On July 13, quoting security officials, the media reported that the PLA has erected concrete watchtowers with CCTV cameras “inside India-claimed lines” in Ladakh. According to an official of the Ministry of Home Affairs, “The watchtowers and posts erected by the Chinese overlook areas held by the Indian Army. It’s a matter of extreme concern.” An IB official said, “The Indian patrols at these friction points are outnumbered by the Chinese. The Indian Army too is erecting poles fitted with digital cameras to monitor Chinese movements inside their occupied zones.”

Konchok Stanzin, Councillor from Chushul, says villagers have lost access to large grazing areas close to Gogra in eastern Ladakh due to rising Chinese presence; villagers are blocked from going to Kiu La pass, earlier used for cattle grazing by locals of Lukung, Phobrang, and Yourgo… We fear that Chinese are nibbling away at our territory. This was never a disputed area.”

On August 30, nearly 100 PLA soldiers with 55 horses intruded over 5 km into Uttarakhand’s Barahoti District, crossing Tun Jun La Pass, stayed in the area for three hours damaging some infrastructure, including a bridge.

In January 2021, a newly constructed Chinese village was reported to have come up 4.5 km inside Indian Territory, on the banks of the Tsari Chu in Arunachal Pradesh’s Upper Subansiri District. This led to anti-China protests in Arunachal Pradesh and burning Chinese President Xi Jinping’s effigies. But when a media outlet sent satellite images of the Chinese village to the Ministry of External Affairs and queried the intrusion, the MEA’s response was noncommittal.

General Naravane says by and by all friction points will get resolved, differences can be resolved through dialogue, and he is hopeful of achieving results. However, this may be wishful thinking and depends on how much we are prepared to cede with China holding all aces at the bargaining table.

In Depsang, PLA made a 20-km deep intrusion at Y-Junction in 2013, which it vacated three weeks later only after India dismantled its structures and surveillance equipment from Chumar, some 400 km south of the intrusion area. This time the PLA has installed surveillance structures at the Y-Junction and is not permitting our patrols to approach Patrol Points 10, 11, 11A, 12 and 13 that were established ‘short’ of the LAC years back on recommendations of the China Study Group.

So far China has rebuffed any talks on Depsang and Demchok. Whether the message calling them ‘legacy issues’ in our media indicates preparing grounds for their surrender only time will show.

Not blaming China for the aggression in May-June 2020 was a major mistake on our part. Describing intrusions as “friction points” would be interpreted as cowardice by China. To top this, the line that “we too keep going across” emboldened China more. Even to-date we are officially blaming China only for the Galwan clash. Vacating the Kailash Range in our own territory was further proof of our pusillanimity – what was the reason; threat conveyed by Chinese foreign minister to his Indian counterpart?

Little wonder on September 30, Chinese Foreign Ministry spokesperson Hua Chunying said, “The Indian side has long pursued the ‘forward policy’ and illegally crossed the LAC to encroach on China’s territory” as the “root cause of tension” in the border situation. This is not surprising considering the lies Xi Jinping spoke during his address at the UNGA – China has never invaded any country and blah-blah. Our rejection of the Chinese statement makes no difference to Beijing.

The political stance on the 2020 Chinese aggression conveyed by the Defence Minister is that “not even one inch of territory has been lost”. CDS General Bipin Rawat told the Parliamentary Committee on Defence in September 2020 that measures have been taken to thwart any attempt by China to “further change or alter” the status quo along the LAC. Commanders can be muzzled from speaking the truth but the troops deployed on ground tell you where all the Chinese have intruded, which is considerable.

According to a veteran Divisional Commander of Ladakh, “If this continues then the PLA can even outflank and roll our entire defensive position from Chumar to Demchok to Loma. In addition they can attack DBO along with the airstrip and pose a threat to Siachen.” Our Pundits in MoD and MEA would laugh this off, but consider the following:

* US President Joe Biden’s speech at the UNGA was ‘conciliatory’ towards China – forget the six nuclear-powered submarines pledged to Australia that will take another 15 years or more.

* The hidden part of the US-Taliban deal is contrary to Indian interests – as commented by our external affairs minister recently.

* America’s concern is China attacking Taiwan, not India. Chinese air violations against Taiwan have risen exponentially but that could be too diversionary.

* General Wang Haijiang is positioned as new Commander of WTC – fourth change since the 2020 Chinese aggression. Wang was part of the Chinese invasion of Vietnam in 1979, when Xi Jinping was Secretary in China’s Ministry of National Defence. Before taking over WTC, Wang was Secretary, Xinjiang Military Region.

Pakistan is Beijing’s puppy on the leash but in the backdrop of slowing Chinese economy, internal and external dissent, and the 20th National Party Congress of the Chinese Communist Party (CCP) in 2022 that will shake up China’s political hierarchy, Xi Jinping has turned vicious against the private sector and even artists.

China considers India as America’s lackey and Xi Jinping may like to teach New Delhi a lesson, it would be signalling the US and its allies; responding to the noise over Quad and AUKUS, and he may go for it this winter. China would also want to test its new weaponry before a possible fight with the US.

Ducking behind the logic that China does not want war is irrelevant; China doesn’t want all out war but that does not prevent it from making dent(s) across the Himalayas.

China understands our military capabilities but it is the political will that it would like to test, besides denting our economy, because Beijing views India as a rival and hindrance to a China-centric Asia.

Massing of troops and weapon systems on the border is not enough. For deterrence to be effective, it has to be selectively demonstrated, which we have failed to do till now. The Galwan clash was an automatic response by our troops on ground. If our hierarchy had the gall, we should have captured the Galwan heights by next morning. That would have demonstrated political will.

Finally, despite our national focus on upcoming state elections, we must recognise the dark clouds over Ladakh; don’t ignore them as environmental vagaries. 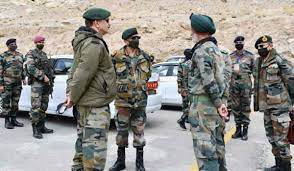