In a lighter vein

Aroosa Alam, a Pakistani national who ruled and reigned for over a decade by the side of former chief minister Amarinder Singh, is furious. Furious with the Congress party for attacking her personally and questioning their erstwhile leader for his relationship with her. She has sought to describe him as her mentor and her close friend in different statements and interviews to the media.

But she has a point. Why was the Congress, and indeed the BJP and the Akali Dal and all the opposition parties silent when she was in India, the official hostess at his events and a person many sought for tickets, for work, and help of various kinds from the ‘Captain’. At a time when politicians and governments here were going bananas over the threat from Pakistan terrorists, and good Indian citizens were being targeted for even speaking well of the neighbouring country, Alam remained in Chandigarh and at a special orchard in Himachal Pradesh unscathed.

Not a word was raised against her presence, or her friend who went on to become the all powerful CM of Punjab at the time.

Not a word that she was from Pakistan, the daughter of late Pakistan President Yahya Khan’s well known friend Akleem Akhtar referred to in the charmed circles there as ‘General Rani’, and she herself with good contacts with the top brass in the Pakistan intelligence and military. Or so we were told by journalists when we visited Pakistan as journalists with Alam friendly and hospitable, and of course always beautiful.

So it does seem strange when Singh attacked Navjot Singh Sidhu for being an anti national just because he visited Pakistan in what was clearly a gesture of diplomacy, a hug here, a few words of praise there and quite meaningless in the larger context of interpersonal relations. (Sidhu of course being a politician of little substance in the larger scheme of things.)

Alam thus has hit the nail on the head. If she was so unsavoury as the Congress is making out now, why did its government at the centre grant her continuous visas, and look the other way when the chief minister of border state Punjab allowed her a good say in his affairs? And why did the BJP government at the centre continue to facilitate this, without raising an eyebrow about her links in Islamabad, her travels to and fro, and her friendship with the leader of the government in Punjab?

This has been the topic of speculation in Punjab with no answers forthcoming. Alam was accepted as Singh’s ‘friend’, some like to say companion but then they can be sued for character assassination, and dined and wined with the elite of Chandigarh. Singh has released photographs of her with Congress leader Sonia Gandhi, as indeed there are many of her with political heavies from all parties. She was not skulking around, she was the hostess at many dinners, she ran the orchard it seems in Himachal Pradesh and fixed the menu for lavish dinners hosted by Punjab’s chief minister. She was indeed a visible presence, pretty, dynamic, and elegant as most Pakistani women are.

She had access not just to the elite but to the top officials of the government and if she had wanted it ---of course she did not --- access to top files as well. There is no word from either the Congress or the BJP about what kind of background check they did on this Pakistani national moving in high circles, what were her connections back home, how close was she to the military establishment, and what were the reasons because of which she not only kept getting her visas renewed but was considered ‘safe’.

Rumours fly and while these have to be necessarily disregarded, it does seem that the only one person who seriously objected to Alam was Singh’s wife who went on to become minister of state for external affairs in Manmohan Singh’s council of ministers. And insisted that Alam not be given a visa for Punjab. Now while there is no official confirmation of this either, it is true that Alam was not able to travel through Punjab and confined her long stay ---16 years it seems--- to Chandigarh and Himachal Pradesh orchards.And of course other parts of the country.

The Captain has a right to have any friend he chooses. But then when he hurls the now fashionable epithet of anti-national at Sidhu and others, he needs to explain why the presence in his home till recently does not make him worthy of this description as well. He has been stating in this war of words with different functionaries from the Congress --that always wakes up after birds have flown---that "Requests for such visas (for Alam) are sent by Indian high commission to MEA which gets them cleared by RAW and IB before approving. And that's what happened, in this case, every time.” And that a detailed inquiry was conducted in 2007 when he was not the chief minister by the National Security Adviser at the instance of the then Prime Minister. And asked Singh, “you still want to waste Punjab's resources on this? I will help you with whatever you need.”.

Perhaps he should. These enquiries must have been on a regular basis, accompanying the clearance of every visa request. Perhaps it is time these are shared to still all speculation, and to assure the late comers that all has been well, and that Alam was a genuine friend with no real past, and a good Pakistani national who passed the intense scrutiny of both the Congress and BJP governments at the centre. Why keep this stupid controversy alive, right?

Alam was a journalist in Pakistan and had visibly good contacts is what we scribes who had met her several times can say. She was close to the heavy weights in power when we visited the country, and certainly not a doll for decoration on the mantelpiece. Very personable, warm and determined. 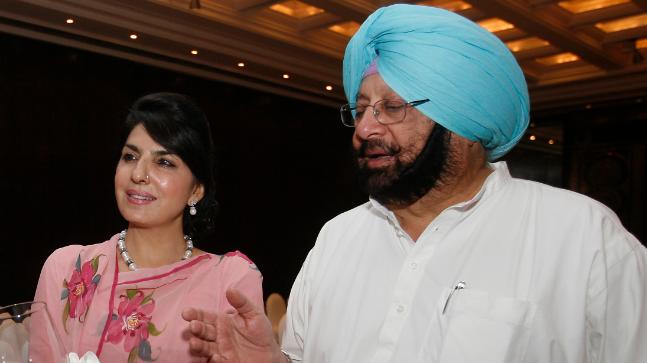