Farmers’ Agitation Inspired The Movement For Change In Chile

Indians must note that the farmers’ movement in the country, was one of the inspirations for the historic regime change in Chile.

That Gabriel Boric 35, a candidate of the Left with Communist support, trounced the far Right, Jose Antonio Kast, to become Chile’s youngest President is now a reality. And the Indian angle is heartwarming. The popular movement which brought Boric to power had in its final stretches, drawn inspiration from the farmer’s movement in India.

Thomas Hirsh, member of the Chilean parliament representing the Humanist forum closely associated with Boric, was the point man in touch with the farmer’s leaders for guidance and support. The farmers said that they would refrain from endorsing Boric’s candidature but would support the people’s movement. “Just as we have steered clear of politics here.”

Dr. Ashish Mittal, General Secretary, All India Kisan Mazdoor Sabha, wrote to Thomas Hirsch, “Our struggles present many similarities in the challenges we face from the cruel and dehumanizing neo-liberal regimes attempting to destroy the well being of our people…..and opening the way to control these resources and markets by transnational corporations.”

The leader of Chile’s Communist party, Guillermo Teillier, explained the reason for supporting Boric. “He is the only one who can bring together a broad movement that will lead the people of Chile to prevent the rise of neo fascism.”

Fear of “fascism” is justified on many counts. First, the opponent, Kast, the conservative who lost was the darling of the copper magnates, other corporates and, of course the CIA. Also, he was a fan of Pinochet, known for his unspeakable brutalities. Given Latin America’s roller coaster shifts, Kast may be down but cannot be counted out for good. Recent Latin American experience fits the image of the pulley: people bring to power their governments which vested interests work hard to replace.

Chileans, indeed Latin Americans, have an abiding memory of Salvador Allende and the Chilean spring of 1973 which was snuffed out by corporate interests and direct US support. The Truck owners, CIA, corrupt armed forces and, ofcourse Augusto Pinochet, who staged the coup d’état, all combined to bringing down Allende. The dramatic footage of the Presidential palace bombed by British Hawker Hunters is all part of Patricio Guzman’s superb documentary –– The Battle of Chile. Then there is that permanent danger from that great global compact between imperialism and neo-liberal establishments. Corporates are the lynchpin in this plan.

During the Cold war, all People’s Liberation movements were legitimate. After the Soviet collapse, these became terrorist movements. Likewise wherever people bring into power governments on issues of bread and butter, health care, pensions, inequality, the media, at the instance of the corporates who own them, focuses elsewhere.

It amplifies issues of identity, ethnicity, migration, even Covid, a pandemic though it is. Remember, the Shaheen Bagh movement against the Citizens Amendment Act (CAA), which had spread nationwide, was wound up following the earliest Covid scare in 2019. The Covid “scare” even when real can also be misused by cynical states. For instance postpone elections in UP if defeat looms.

Two facts are worth noting. Boric’s movement and the farmers’ agitation, both succeeded despite the media being arrayed against them. Is the declining credibility of the media a global reality? This is a serious problem for manipulated democracies.

Can the Boric euphoria be ended just as Allende was? Not impossible. In fact, corporates, elements in the Armed forces and the CIA must already be in a huddle in secret locations. Chile is the world’s top producer of copper and iodine. This is what the corporates and their supporters in the US were not comfortable leaving in “Communist” hands in 1973.

We in India had experienced the world’s first communist government come to power through the ballot box when E.M.S. Namboodiripad became Chief Minister in 1957. President’s Rule was imposed in 1959 at Nehru’s behest.

For the US, obsessed as it was with the Monroe doctrine and Domino theory, a duly elected communist President in the western hemisphere was worse than anathema; it was like another fall of man. American fingerprints were therefore, all over the military operation which killed Allende.

One motivation then was also to prevent the Soviet Union from finding hospitality in Latin America. Boric in Santiago offers a threat of another kind. In 1973 the US and Europe were interested in mineral resources. Today, the most voracious consumer of minerals is China, with whom an open “competition” has been declared by the US. What competitive action can the US be pushed into to protect its interests in Chile? This is where a major factor makes 1973 very different from 2021 –– the decline of US power.

A weakened power will not punch above its weight but, like pugilists on the wane, will not hang up its gloves either. With big powers it will not risk major conflict but it will make it known that it is still around. And around it is. Look at the way it imposes sanctions on Russia, Iran, Venezuela –– there are at least 30 countries on the list.

The other asset the US has is the western media, always ready with cans of black paint to tar those nations the US does not approve. Once Boric is sworn in as President in three months, he will be in the line of fire, just as Cuba, Venezuela, Peru and Bolivia are.

It is universally acknowledged that Boric won the election fairly. Does this entitle him to be on President Biden’s invitation list for the next “summit for Democracy”? To the last such jamboree on December 9-10, 80 world leaders were invited. Among the distinguished invitees was Juan Guaido, a Venezuelan non entity sporadically touted by Washington as the “interim President” of Venezuela. By this yardstick, the far right Pinochet admirer, Antonio Kast, roundly trounced by Boric, may well be looking for sources who will carry the following message to Washington –– “Barkis is willing.” 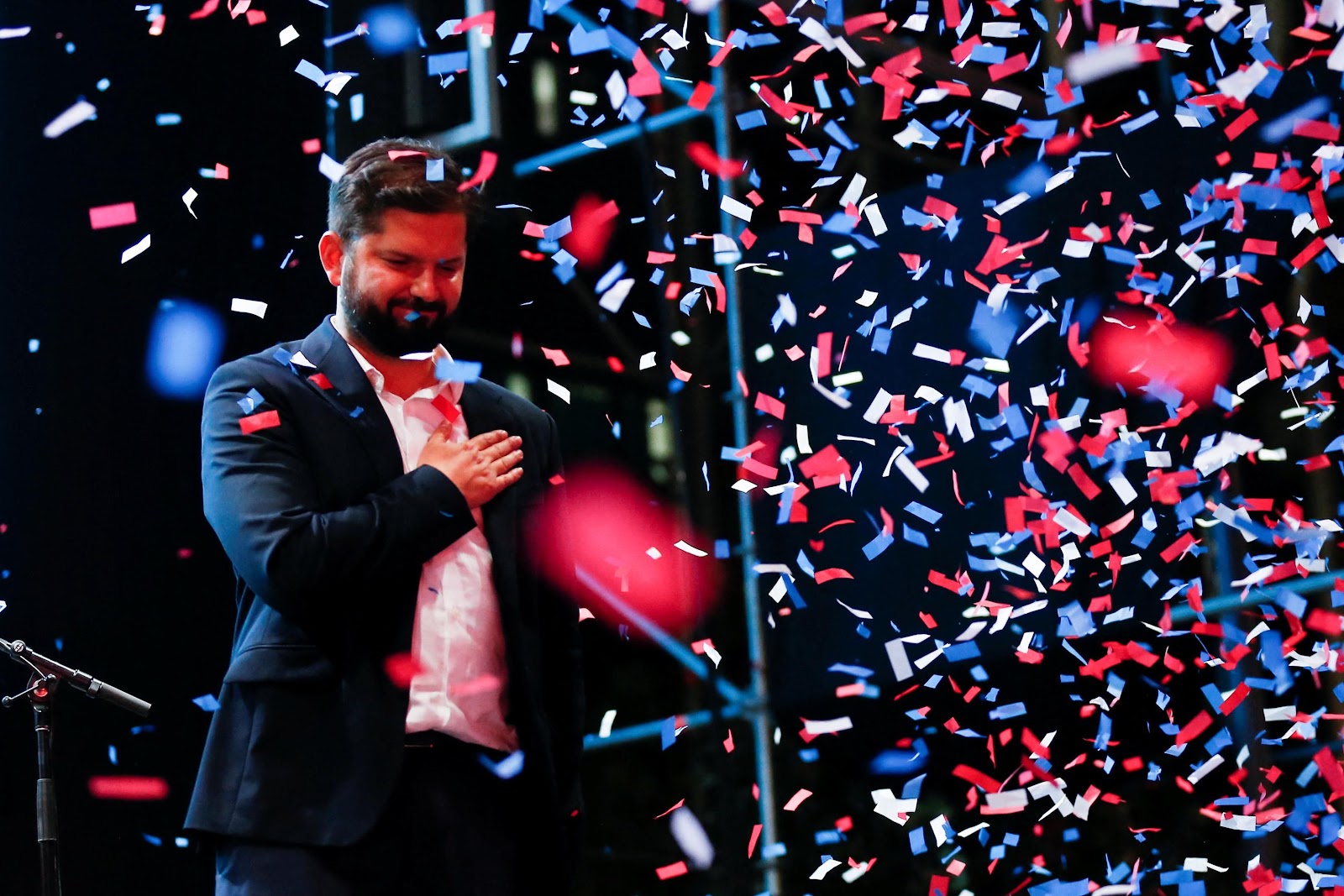