Is ‘Hindutva’ a Threat to National Security?

At Haridwar in poll-bound Uttarakhand, there was a Hindutva jamboree called the ‘Dharma Sansad’ or ‘Religious Parliament’. The theme of the event-‘Islamic Bharat mein Sanatan ka Bhavishya: Samasya va Samadhan’ (‘The Future of the Sanatan Dharma in Islamic India: Problem and Solutions’) suggested that India is fast becoming Islamic. This sent out a strong message that Hinduism is in existential danger and needed to be defended by wiping out Islam.

How is it to be done?

Speakers competed with each other in giving out their formula. Prabodhanand Giri, president of the Hindu Raksha Sena, based out of Uttarakhand wanted the police, the politicians, the army and every Hindu to pick up weapons and conduct this cleanliness drive (safai abhiyan).

Sadhvi Annapurna aka Pooja Shakun Pandey, general secretary of the Hindu Mahasabha gave out this call: “Nothing is possible without weapons. If you want to eliminate their population then kill them. Be ready to kill and be ready to go to jail. Even if 100 of us are ready to kill 20 lakhs of them (Muslims), then we will be victorious, and go to jail… Like [Nathuram] Godse, I am ready to be maligned, but I will pick up arms to defend my Hindutva from every demon who is a threat to my religion.”

Some speakers called it Dharmadesh (religious edict) that has to be accepted by governments or otherwise a war more horrible than that of 1857 will be fought to make them obey!

Yati Narsinghanand, chief priest at Ghaziabad’s Dasna Devi temple and the brain behind the ‘Dharma Sansad’ backed up these rants and made this brutal announcement: “...If any youth worker is prepared to become the Hindu Prabhakaran, then before anyone else, I will give him Rs 1 crore… and if he continues for one year, I will raise at least Rs 100 crore to give.”

The priest was referring to Velupillai Prabhakaran, the founder and leader of the Liberation Tigers of Tamil Eelam (LTTE), an armed organisation, banned in India, that sought an independent state for Sri Lankan Tamils.

This is a clear case of weaponing the Hindu religion in the garb of ‘Hindutva’ and setting it at war with India. This has outraged the nation.

Senior veterans reacted quickly. Admiral (Retd) Arun Prakash, former navy chief, wrote: “Why is this not being stopped? With our jawans facing enemies on 2 fronts, do we want a communal bloodbath, domestic turmoil and international disgrace? Is it difficult to understand that anything which damages national cohesion & unity endangers India’s national security?”

This was endorsed by former Admirals, Lieutenant Generals, Major Generals, Brigadiers and Colonels.

But the civil administration represented by Uttarakhand DGP Ashok Kumar did not even lift a small finger. To him what happened was normal since it did not lead to any killing or violence. Also, the tridents and swords brandished at the event were ‘traditional things.”

The DGP ignored the fact that what happened at Haridwar were all cognizable and non-bailable offences under Section 153A, Section 295A, Section 298, and Section 505(2) of the Indian Penal Code. It also attracted the National Security Act and UAPA. But it seems as if against the Brahmastra of Hindutva, the Indian state is impotent!

By the way, what is this demon called ‘Hindutva’ that in the garb of saving Hinduism has become a threat to national security.

Vinayak Damodar Savarkar, the RSS icon had differentiated between the two as early as 1923: “Hinduism is but a fraction and small part of the larger Hindutva ideology which goes beyond religion. Hindutva, according to him, comprised rashtra (nation), jati (common race), and sanskriti (common culture).”

This is a Nazi concept, pure and simple. It is in this context that some time ago Congress leader Rahul Gandhi made a fine distinction between Hindu and Hindutvadi saying that while the former is tolerant, inclusive, peaceful and the pursuer of satya [truth], the latter are those who weaponised Hinduism to instil hatred, intolerance and violence in the pursuit of satta [power].

In this mad pursuit of power by a political party, Hindus are being deliberately radicalised. In a country where 80% of the population is Hindu, and just 14% Muslim and 2.3% Christian, BJP has achieved the astonishing feat of creating a deep sense of Hindu victimhood, stoking the othering of Muslims and Christians via disinformation, hate speech, opening old religious wounds, manipulating a servile media, silencing progressive voices, and empowering Hindu supremacist vigilante groups. “Hindu khatre mein hain” (Hindus are in danger) is a right-wing refrain that resonates deeply today, particularly among the upper castes.

While Muslims are facing frontal attacks, Christians are being assaulted through a storm of misinformation about imagined ‘forcible’ conversions that has culminated in the passage of the draconian anti-conversion bill by the BJP government in the Karnataka assembly.

Many other states have similar laws. Christian Community leaders say that 2021 has seen the worst attacks of the decade against Christians and their places of worship across the country and not just in Karnataka.

There are many scholarly dissertations on Hinduism and Hindutva. But I would prefer the earthly definition by Lok Nayak Jayaprakash Narayan (JP) hailed as the “The Second Mahatma '' for his leading the fight against Emergency and securing India’s second freedom. To him “The Hindu religion is a strange mixture of good and bad, the sublime and low, the most emancipated thought and the most bigoted obscurantism.”

And Hindutvavadis are detracting from the greatness of India and the glory of Indian history and civilization. Such persons according to JP ''are in reality the enemies of Hinduism itself and the Hindus. Not only do they degrade the noble religion and destroy its catholicity and spirit of tolerance and harmony, but they also weaken and sunder the fabric of the nation, of which Hindus form such a vast majority.”

There cannot be a harsher condemnation of Hindutva. Yet it is succeeding in poisoning Hinduism by severely distorting and damaging the very ethos of the religion. Hinduism survived and prospered for millennia—without a designated holy book like the Bible or the Koran and with no Mecca, Vatican or Jerusalem to guide.

In fact, it is this absence of a ‘central command’ and a non-uniform format that actually accounted for the intrinsically tolerant and federal structure of Hinduism, that historically brought together, without any force, different people scattered across this widely-varying subcontinent.

Sanghis have reversed all these by establishing a ‘central command’ for Hinduism at Nagpur to dictate and direct the supremacist agenda. The recent grandeur of Khasi Vishwanath, presided over by Prime Minister Modi himself, is the manifestation of such ‘centralisation’ of Hinduism.

This ‘central command culture’ is nourishing and propagating the ‘bad, low and the most bigoted obscurantism’ of Hinduism instead of its sublime and serene aspects. Unabated hate and intolerance towards minorities has become their obsessive agenda. Hindus are being persuaded to believe that India’s biggest problem is its Muslims and Christians. Before 2014, they thought their chief concerns were poverty, bad governance, economic distress and corruption. BJP came to power on the promise to fix all that.

But nothing has been fixed and things have gone from bad to worse. India now has the most pathetic human development indices, the highest inflation in decades with employment and Labour Participation Rates plunging to record low levels. With 230 million more people falling below the national minimum wage poverty line, India is back to a “country of mass poverty.”

It has become the second worst country in the world in income inequality. Quality of life and living are at the lowest ebb with 189.2 million people undernourished; 51.4% of women anemic; 34.7% of the children aged under five stunted with 20% suffering from wasting. With the closure of more than 400,000 SMEs and 12000 farmers committing suicide every year India has become a country of deep distress and heading towards disastrous stagflation. And facing financial bankruptcy due to colossal crony-capitalism, corruption, incompetence and mismanagement, government is hurriedly selling off strategic and lucrative public assets built with the sweat and toil of its people to select and favourite Oligarchs.

BJP's toxic obsession with the politics of Hindutva is pushing the country to the brink of destruction in every sense of the term. For, the BJP's model of governance cannot be separated from its idea of Hindutva. You cannot challenge one and not the other.

But, with all the distress listed above BJP has increasingly fallen back on supremacist politics to deflect attention and evade responsibility. To win elections, it needs to keep polarizing Hindu voters against Muslims and Christians, and spin ever more outrageous campaigns to demonize these two religious faiths. This is the essence of what happened in Haridwar.

All these have brought the security of India as a nation into sharp focus. Contrary to popular perceptions and ‘patriotic’ propaganda, national security is not just soldiers on the borders and military boots in Kashmir and North East. It has more to do with economic prosperity and stability, social cohesion, communal harmony and internal peace. All these are being severely disturbed by bigots, fundamentalists and zealots by weaponizing and militarising the sublime and serene religion of Hinduism and setting it against fellow citizens adhering to the same as well as other faiths. In the event, ‘Hindutva’ has unabashedly become a serious threat to National Security.

M.G.Devasahayam Is a former Army and IAS officer 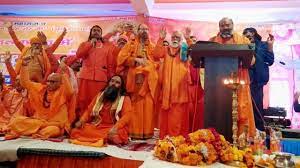