Sunrise Over Ayodhya is a valuable addition to the large literature on the Babri Masjid–Ram Mandir controversy which dominated the Indian political life for over 70 years since Independence. Salman Khurshid, a legal luminary and a former Union minister for external affairs and law, has impeccable credentials to delve into the complexities of the issues, and deserves to be complimented for the clinical analysis of their pros and cons. It was shocking to see a demand being made in the Delhi High Court for banning the book. Fortunately, the court declined to entertain it.

These include encouraging the issue of court orders for opening the locks on the temple in the Babri Masjid, and failing to explore the suggestions made for amicable settlement of the dispute whereby the Masjid could have remained intact. This was during the term of Rajiv Gandhi as prime minister.

More important is the glossing over of the failure of prime minister P.V Narasimha Rao in dismissing the Kalyan Singh government in Uttar Pradesh and imposing President’s rule in November 1992, as suggested by the Ministry of Home Affairs, which could have saved the mosque.

The Supreme Court judgment has some striking features. Unlike in other constitutional cases, it is a unanimous judgment of five judges. But, unlike in any other case, it has an addendum to the judgment emphasizing the importance of ‘faith and belief’, quite contrary to the emphasis in the main judgment on evidence adduced by the parties.

It is not clear how it is to be read but it is not a dissenting judgment. (The only parallel, in an equally sensitive matter, that comes to mind is the report of the States Reorganization Commission in which the notes of two members were given only as notes although they advocated views opposed to the majority view of the commission.) Khurshid has rightly stated: ‘Is the present judgment, then, a compromise between faith and law that therefore looks a little askew because of the court’s reluctance to acknowledge that?’

The judgment no doubt brought finality to this most agonizing and divisive chapter in India’s history. But it underlined again that courts of law are not always courts of justice. Reference may be made to an interesting story narrated by Justice Gajendragadkar. When Viceroy Lord Reading went to Patna to open the new building of the Patna high court, at the garden party, a layman asked him: ‘Why do you call your courts, courts of law rather than courts of justice?’ In a tone of humour, Lord Reading promptly replied: ‘Government do not believe in using satire in determining the nomenclature of their institutions.

It was gratifying to note that adjudication of the title was to be determined on the basis of evidence sustainable in the court of law. But, the author has brought out some curious findings of virtual admission by the Muslim side that they were unable to produce proof of use as a mosque from 1528 to 1856. This sounds strange as the entire period covered the Mughal Empire, and it is difficult to believe that the mosque was built but prayers were not performed through the reigns of emperors Babur, Akbar, Jehangir, Shahjahan and Aurangzeb, the great Mughals.

The evidence of the three inscriptions on the mosque indicating the period of its construction etc. has been overlooked or disregarded by the court for reasons difficult to understand. This is fully brought out by Nizam Pasha in his article, ‘Ayodhya Verdict: The Poems that Could Have Changed History’ (The Wire, 4 April 2020).

Pasha writes: ‘When the arguments were made in the court, Justice Gogoi interrupted to say that since he could not even understand Hindi, these arguments on linguistic nuances were impossible for him to appreciate, so it was better if they were submitted in writing instead of being presented orally in court. None of the above arguments, although submitted in writing as instructed, eventually found their way into the judgment. Instead, the court held that since it was admitted by the Hindu side in the pleadings themselves that the structure was constructed in 1528 by Mir Baqi, there was no necessity to “enter into the thicket” presented by these inscriptions.’

The Court has taken the view that as there was no proof of dedication and uninterrupted use was not established, it could not be said that there was a waqf. Pasha has written: ‘The argument that the inscriptions, if proved, could constitute evidence of waqf-by-dedication was not dealt with in the final judgment, and we do not know why their Lordships did not find it fit for their consideration.’

Salman Khurshid rightly concludes: ‘Perhaps when the case is examined dispassionately, history will judge how diligently and effectively the case of the masjid was presented by those who made a lifetime career of political advocacy.’ Or, it could be that due to the growing threat of Hindu Rashtra, Muslims did not want to resist the claims of Hindus any longer and preferred that the decision should come from the Court, rather than be seen as their bending under pressure.

Khurshid is exasperated by the support given to the concept of Hindu Rashtra by [legal scholar] Faizan Mustafa. While the author’s frustration is understandable, this may also be acceptance of the inevitable.

The author has rightly raised the questions: What the decision of the Supreme Court might have been if the mosque was still standing, or, as was promised immediately after the demolition, it had been restored?

A considerable portion of the book is devoted to discussion on Hindu religion. It is comprehensive and erudite and is perhaps aimed at bringing out the distinction between Hinduism and Hindutva. I fully agree with the author that the two are not the same. But it is wrong to equate the ideology of Hindutva with ISIS and Boko Haram.

Hindutva is an aggressive political ideology with its own philosophy. Bracketing the terms ‘Hinduism’ and ‘Hindutva’, as was done by the Supreme Court in Dr. Ramesh Yeshwant Prabhoo v. Prabhakar Kashinath Kunte, AIR 1996 SC 1113, was a major mistake which has remained unrectified so far.

Four months after the so-called Hindutva Judgment, a three-judge bench of the Supreme Court, on April 16, 1996, suggested setting up a larger Bench to hear the matter. However, a seven-judge Bench, led by Chief Justice of India T.S. Thakur, clarified that the Supreme Court was only examining what constituted corrupt electoral practices under Section 123 (3) of the Representation of the People Act, 1951. The court said it would not be going into the larger issue of whether 'Hindutva' means the Hindu religion.

This is most unfortunate as the decision of the Court in 1996 was on the basis that there is no distinction between ‘Hindutva’ and ‘Hinduism’. But, ‘Hindutva’ is certainly not the way of life of a common Hindu. Savarkar was the first person to bring out clearly the distinction between ‘Hindutva’ and ‘Hinduism’: ‘Here it is enough to point out that Hindutva is not identical with what is vaguely indicated by the term Hinduism.’ (Savarkar, V.D., Hindutva, Bombay, Veer Savarkar Prakashan, 1923, iv, 4.)

Secularism has been declared as a part of the basic structure of the Constitution but if it is to be operationalised in the real sense of the term, it is imperative that the Supreme Court correct its misinterpretation without loss of time.

The Supreme Court has noted: ‘During the pendency of the suits, the entire structure of the mosque was brought down in a calculated act of destroying a place of public worship. The Muslims have been wrongly deprived of a mosque which had been constructed well over 450 years ago.’ In exercise of its powers under Article 142 of the Constitution, the Court has sought to remedy the wrong done to the Muslims by giving a 5-acre area to the Sunni Central Waqf Board.

But, it has to be noted that all those involved in the demolition of the mosque have also been acquitted in the criminal cases. Though the criminal cases were not part of the title case in the Supreme Court, taken together a nagging question persists: Is this justice? Is this the ‘rule of law’ envisaged by the Constitution? It is impossible to agree with Khurshid that ‘the greatest opportunity that the judgment offers is for a reaffirmation of India as a secular society. It is a decision that refutes the idea of Hindu Rashtra.’

It is reassuring that the Supreme Court has upheld the unqualified validity of the Places of Worship Act, 1991. But drum-beating has already begun for the ‘emancipation’ of shrines in Mathura and Varanasi. It is a pity that the Supreme Court did not lay down the red-line in strong terms to protect the values of secularism and upholding the rule of law.

The editing of the book leaves a great deal to be desired. The arrangement of chapters is messy. The heading of chapter one, ‘The Long Demolition’ is somewhat clumsy. There is considerable repetition such as on p. 267-68 and pp. 330-333, and relating to the tearing a site map of the temple in the Supreme Court by senior counsel Rajeev Dhawan, etc. The phrases, ‘mosque party’ and ‘temple party’ (p. 338) could have been substituted by more elegant description. Most important is the absence of index.

Three points for correction. It is stated (footnote on p. 3) that Article 370 of the Constitution recognized the special status of Jammu and Kashmir. I have brought out fully in my book, India- A Federal Union of States, that this article was a temporary provision and did not grant special status to J&K.

As for the reinstallation of idols (p. 205) which had been shifted during the demolition of the mosque, it should have been made clear that the idols were brought back and placed at the original location at about 7.30 in the evening, before the imposition of President’s Rule. The roof over the idols was placed the next morning.

It is stated on p. 210 that ‘Ultimately, Kalyan Singh was pronounced guilty of contempt and directed to remain in custody till the rising of the court.’ This decision related to the actions taken by Kalyan Singh in July 1992 of demolition of temples and structures in the acquired land in violation of court orders. The contempt case pertaining to demolition of the Babri Masjid and Kalyan Singh not abiding by the assurances given to the Supreme Court is still to be decided! And with the demise of Kalyan Singh, it has now abated.

The book makes an important contribution by analyzing the various facets of the judgments relating to the Babri Majid Ram Mandir dispute. It should be read widely by law-makers, opinion leaders, the legal fraternity, those in the media, and the young generation which has a large stake in the future of secular India. 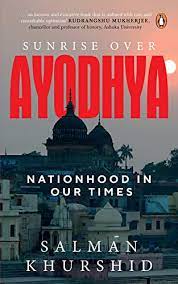