Will All Soldiers Vote?

Our bureaucrats hold soldiers in disdain

Switching of parties by politicians has picked up pace after dates for upcoming elections were announced. The happenings in Uttar Pradesh, Goa and Uttarakhand are just the beginning. This is the time to make instant bucks – better than playing with bitcoin. Morality is passé in the powerplay and the bottomline is that for the political class it is Votes First, all else secondary.

Our bureaucrats (on whom our politicians depend) hold soldiers in disdain. Politicians dislike soldiers voting because they are ‘apolitical’ which upsets their vote calculations. But the only way the forces can earn their due place and get adequate budgetary financing amidst the politico-bureaucratic skullduggery is to make soldiers voting compulsory.

To gauge the import of soldiers voting, which is their fundamental right, recall what happened during the UP State elections in 2007. Three months before the elections, the Corps headquartered in Mathura informed the state government that troops of the Corps located in UP would vote at the place of their posting in accordance with the judgment of the Election Commission. Concurrently some veterans sent an RTI to the local MLA and MP to ask how they had helped the families of serving soldiers and veterans in their area of jurisdiction and how had they contributed to the development of the military cantonments. There was no response to the RTI queries.

The UP government tried to wriggle out by saying that soldiers should get their voting cards made. The Corps Headquarters responded saying that soldiers cannot be expected to make new voter cards at every station they are posted to, and that the State Government should seek clarification from the EC. Certified lists of soldiers serving in the station were also sent to the state authorities. The result was that special booths manned by EC representatives were set up in the military cantonments. Serving soldiers voted showing their ‘Service Identity Cards’ after EC representatives had cross-checked their names with the list of voters provided to the state authorities. No voter cards were used. This should be followed in all military stations to enable soldiers voting during elections.

Before the elections, the local MLA (nickname Billa) at Mathura came to meet the Station Commander with Rs 10 lakh, promised more, and asked which political party were the soldiers ordered to vote for? The Station Commander returned the money and told him the Army doesn’t issue such orders: soldiers are free to vote for whoever they want to. A second development was the opening of a special cell by the civil administration in the office of DC Mathura to look into the grievances of soldiers, veterans and their families.

Political parties requested permission to hold election rallies inside cantonments. This was denied but they were allowed to put up posters in the civil market within cantonments. At Allahabad, the Army had won a case against an illegal colony in the cantonment. But when these encroachments were evicted, the local MLA complained to the Party President at Delhi, who in turn rang up the Defence Minister and an inquiry landed up in Allahabad. But when the MLA discovered the Division in Allahabad would be voting in the UP State elections, the allegations were withdrawn, inquiry dissolved and the Divisional Headquarters requested when it would be convenient for the GOC to have a meal with the MLA.

After the elections, the MLA elected from Mathura came to meet the Station Commander and asked how he could help in development of the cantonment by way of electricity, drainage or whatever.

There have been some instances of soldiers voting in elections in peace stations, including in Delhi Cantonment, but these have been rare. These have been to showcase that soldiers do vote, or at the initiative of the local commander – but not institutionalized which should be the case.

Besides, if the EC can send a polling party inside Gir Forest for a solitary voter and similarly to very remote areas, surely they can organize polling booths at the battalion headquarters level in field areas. The excuse that all ranks must first register and get voter cards made is impractical time-wise and in far-flung areas, where the internet connection is only at battalion headquarters which too has poor connectivity. The postal ballot bit does not fit time-wise either and lends to fraud through substitution.

In his article ‘Army: Caught between Devil and Deep Blue Sea’ published in 2018, Shudip Talukdar wrote: Army took long to recover from the humiliation of 1962 but 56 years later finds itself in similar predicament facing open hostility and betrayal; what is radically wrong with a system to penalize soldiers who are staking their lives but meekly surrender to forces of rowdyism and vote-banks; what options do soldiers have after being slapped by FIRs, slurs by NGOs and sanctimonious media except to approach the Apex Court for justice, and; the nation must stand solidly behind the soldiers, else it could precipitate a crisis of unimaginable magnitude.

Successive negative defence budgets leading up to the Chinese aggression in 2020 and the mad rush thereafter to plug operational voids is clear evidence of neglect of the military and matters military – same as what Shudip Talukdar wrote in 2018. The defence ministry continued to file appeals in the Supreme Court against military widows, disabled soldiers and veterans.

To institutionalize voting by soldiers, making it mandatory and ‘enabling’ voting by all soldiers, the onus lies on the Service Chiefs of the 1.4 million-strong military and primarily on the Army Chief commanding the 1.2 million-strong army. It is time the Chiefs stop ducking under the excuse that soldiers are free to vote, if they register as voters and get voter cards made – this must stop for reasons mentioned above. These pretexts deny the fundamental voting rights of serving soldiers. The requirement is to streamline the voting by serving soldiers in conjunction with the EC – similar to the procedure in the UP State elections during 2007.

Ironically, no Service Chief to date has mustered the courage to ensure that every soldier exercise her or his fundamental right to vote. Whether the present Service Chiefs will do so is yet to be seen. But the soldiers can see whether the military hierarchy puts their command over themselves or otherwise.

Prakash Katoch is a veteran of the Indian Army. Views expressed are personal 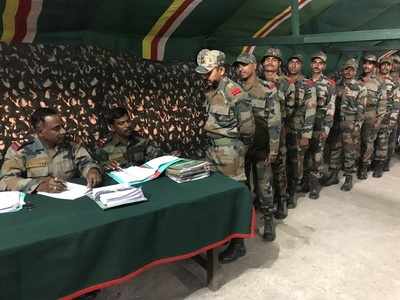