Rumblings in the Apolitical and Secular Armed Forces

In 2006 the Indian Army took a correct step by refusing to accede to the demands made by a few politicians seeking information on the number of Muslim personnel in the rank and file of the Indian Army.

The Indian Armed Forces have always risen to any calamity, natural or man made with extreme distinction, be it rescue and relief after the tsunami that rocked Indian shores on 26 December 2004 or the Gujarat earthquake of 26 January 2001, or aid to civil authorities in the wake of any communal riots, apart from defending the borders of the country whenever the need so arises, which is its primary task.

The Indian Armed Forces are pressed into service when all other options like diplomacy, civil administration or the police forces have failed.

One of the main reasons is that the soldiers of the Indian Armed Forces work and train as one cohesive unit where no political or religious ideologies play any role.

When we recollect cases where political and religious leanings affected the Indian Armed Forces and in turn the nation too, this past history does not inspire confidence. The case of Lt Gen BM Kaul who was appointed General Officer Commanding 4 Corps in 1962, because of political affiliations and sidelining other competent generals, was one of the major reasons of our defeat to the Chinese Army in the India-China War of 1962, and is a stark reminder of the havoc that political affiliations can play in the Indian Armed Forces.

In the recent past, just a couple of years ago, the then Chief of Defence Staff chose to attend a function in a school run by a religious institution along with the Chief Minister of a state, bypassing attending the Navy Day celebrations on 04 December. As CDS and head of the Tri Services, the Navy Day should have been more important than attending a function of a religious institution with political overtones. Clearly there were other factors at play.

In the Indian Army there is Sarva Dharam Sthal which has all the religious institutions of an army regiment together in one place and under one roof. It is common practice to see a Sikh Granthi performing the Tuesday Arti when the Hindu Priest is on leave, or the Muslim Maulvi performing the Sunday Mass when the Christian Pastor is away.

Since Independence retired officers of the Indian Armed Forces going on as Governors or Ambassadors after retirement were far and few, and even these few cases weren’t seen in good light amongst the serving and retired personnel. The Indian Armed Forces always prided itself as an apolitical and a secular organization and the same was expected from its personnel post retirement too by the troops whom they once commanded.

The trend in the last few years of officers of the Indian Armed Forces joining active politics shortly after retirement isn’t a good indicator for the organisation, as it motivates many personnel in service to think of politics as a second career after retirement. This would make them go overboard while in service to prove their political and religious credentials so that they are recognised by those who matter in political circles, in hopes of a smooth transition into politics shortly after retirement. This is bound to affect their functioning in an apolitical and a secular organisation that the Armed Forces is so well known for.

Those who say that a military person will clean up Indian politics as is believed by some personnel of the Armed Forces to justify their political and religious leanings in the last few years, forget in all probability that no military person will ever be made the president of a political party and neither will any career politician allow them to be given an appointment which is of substance, which can cleanse the Indian politics.

And for those who say that armed forces officers have risen up to become the Presidents of the USA so it can happen in India too, should remember that for most of the twentieth century military service was mandatory in the USA which it has never been in India. For a number of generations most US voters went through military life, and were closely associated with military personnel in active politics. This isn’t the case in India.

When asked why they have been candid enough to share that they don’t want to meet the others who differ from them in the political and religious ideologies. It has now started affecting friendships and relationships of over 30 years and that too amongst those who are so well educated and trained and have been in many a combat situation together. Clearly the rumblings amongst the serving and the veteran fraternity of the Indian Armed Forces over political and religious ideologies have begun.

If these rumblings cascade further the day is not far when appointments in the Indian Armed Forces will always be based on political and religious leanings, similar to what happens with our adversary on the western border. It will then signal the end of the world’s finest organisation, which not only the nation but the whole world is proud of.

And if still somebody wants to join politics after his retirement from the Indian Armed Forces then he should join only a clear 10 years after his retirement, so that no connection can be drawn whatsoever during his service in uniform and his joining a political party.

After all, the service in uniform was never supposed to be used for political affiliations, so let there be no connection whatsoever of a person’s decision to join politics and the uniform that he once wore.

Lt Col JS Sodhi who retired from the Corps of Engineers is an alumnus of NDA, Khadakwasla and IIT Kanpur. He is an M.Tech in Structures and has also done MBA and LLB and is a prolific writer. The views expressed are personal 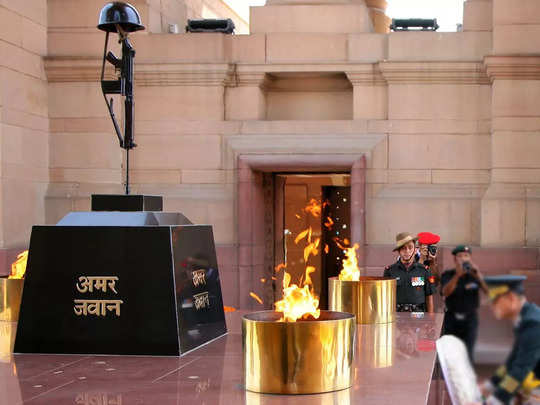