Search for an acceptable solution

Belying the predictions of western media, Russia’s special operation in Ukraine is entering a successful endgame on the political and diplomatic track much sooner than one would have thought.

A close reading of the outcome of the 3rd round of peace talks in Belarus last night is that the Ukrainian negotiators have sought some more time to come up with a full response to the Russian terms for ceasefire.

Ukraine has signalled willingness to be a neutral country ruling out NATO membership. The main sticking points narrow down to: a) recognition of Crimea as part of Russia; and, b) sovereignty of Lugansk and Donetsk.

They are non-negotiable demands. But they are a bitter pill for the Ukrainian leadership to swallow. The Ukrainian stance is that these demands are “practically” impossible.

But, as Vladimir Medinsky, leader of the Russian team, told RT, “In my opinion, there is a big difference between impossible and ‘practically impossible’… I hope that eventually we will find a solution.”

The Russian side feels encouraged albeit yesterday’s talks produced no tangible results. They are in no hurry to rush into major military offensives.

Indeed, the pattern throughout has been that the Russian generals would apply coercive military power to create synergy to kickstart a parallel political / diplomatic track to attain Moscow’s objective (which is not about territorial conquest.)

The western analysts who expected the Russian generals to behave like Patton or MacArthur with a massive attack on Kiev instead witnessed a confusing Russian strategy — slow, halting operations, without excessive force and with a distinct preference to avoid fighting by encircling and bypassing pockets of resistance, and avoiding set battles.

Putin revealed yesterday that “conscripts aren’t and won’t be taking part in hostilities, and there will be no additional call-up of reservists from the reserve… Missions are carried out only by professional troops.”

The Ukrainian side realises that the Russian strategy is winning, as Russian forces are encircling Kiev from the northwest, west and east, Black Sea ports are no longer accessible, and the forces in the east are entrapped. Yesterday, Zelensky acknowledged the grim situation.

After the third round in Belarus, he hastened to assure that talks will continue until a settlement! In his words,

“Today the third round of negotiations took place in Belarus, and I would like to say ‘the third and final one,’ but we are realists. Therefore, we will talk, we will insist on negotiations until we find a way to tell our people, ‘this is how we will come to peace.’”

Russians are in no tearing hurry. They eschew triumphalism, and instead allow enough space for the Ukrainian side to take some really hard decisions on surrender — while military pressure is kept up on Kiev. Foreign Ministry spokeswoman Maria Zakharova said yesterday, “We keep the door open to diplomatic options. As soon as there are corresponding signals, we will be acting on them.”

Importantly, the two sides have agreed on a roadmap for creating humanitarian corridors and Russian side has announced a ceasefire. Also, these corridors will be operated in close coordination through a hotline.

The Russian statement says that a “continuous communication link shall be established between the Russian and Ukrainian sides for mutual exchange of information about the preparation and implementation of the evacuation of civilians and foreign citizens.”

The Russian side since conveyed all relevant details to foreign embassies, appropriate UN and OSCE agencies, the International Committee of the Red Cross and other concerned international organisations. The humanitarian corridors will be:

. from Kiev and adjacent regions to Gomel (Belarus);

. from Sumy along two routes to Poltava (central Ukraine) and to Russia;

. from Kharkov to Russia or to Lvov, Uzhgorod and Ivano-Frankovsk (all three in western Ukraine); and,

. from Mariupol along two routes to Russia and Zaporozhe (on the Dnieper river in southeastern Ukraine.)

This joint work and the lull in fighting sets the stage for the crucial meeting between Russian Foreign Minister Sergey Lavrov and his Ukrainian counterpart Kuleba in the Turkish resort of Antalya on Thursday. The very fact the talks have been elevated to foreign minister level signals hope that a critical mass may be accruing.

Thoroughly disillusioned with the betrayal by the US and NATO, Zelensky is inching toward an agreement with Moscow. It is futile to pre-judge the outcome, but there is a game changer. The major European countries — UK, France, Germany, Netherlands — have rebuffed Washington’s hawkish proposal to impose sanctions on Russia’s oil exports.

Oil exports are Russia’s principal source of income, therefore, this is a strong rejection of Washington’s efforts to isolate Russia. French President Macron captured the zephyr in his remark yesterday:

“It is impossible to build a lasting peace if Russia doesn’t participate in building a comprehensive security architecture on our continent, because history and geography mandate this. Our responsibility is to preserve all the ties that we can preserve. We must continue to talk with the Russian and Belarusian peoples. We need to do this with help from representatives of the world of culture, the scientific and technical community, non-governmental organisations.”

On Sunday, in an op-ed in the New York Times, UK Prime Minister Boris Johnson also wrote: “We have no hostility toward the Russian people, and we have no desire to impugn a great nation and a world power. Ukraine had no serious prospect of NATO membership in the near future. This is not a NATO conflict, and it will not become one.”

Meanwhile, major European countries, especially Germany, are ruling out EU membership for Ukraine, either — which, ironically, was the issue that had precipitated the US-backed coup in Kiev in 2014 triggering the catastrophic slide toward conflict involving Russia. 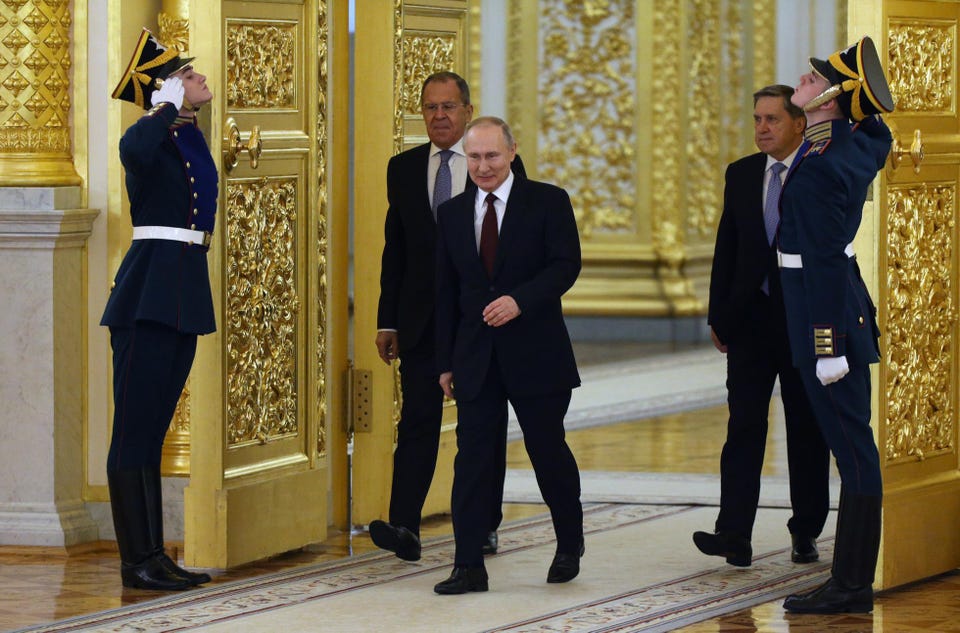